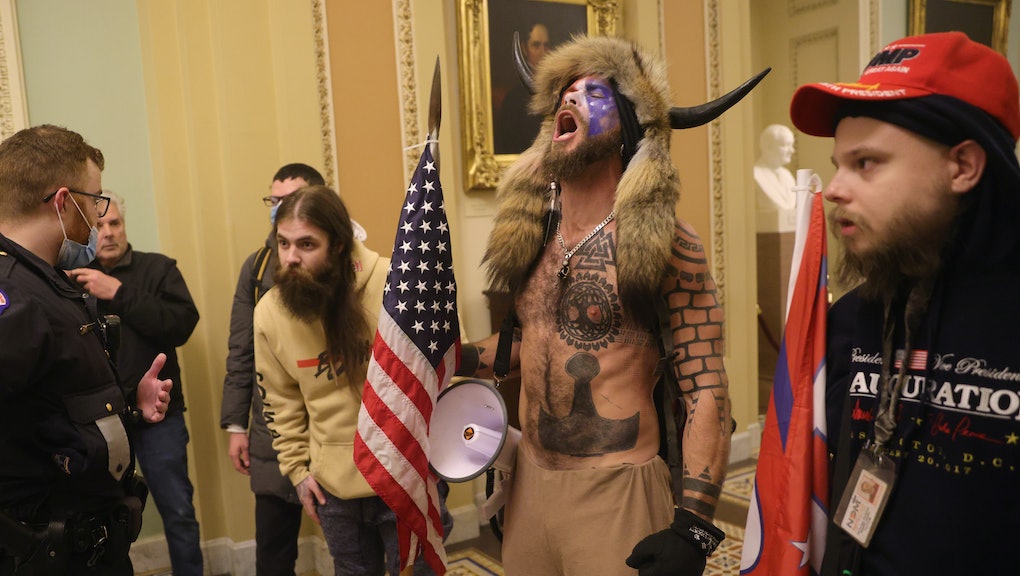 January 6 insurrectionists are getting pretty creative in court

It's been months since a mob of MAGA-addled insurrectionists stormed the halls of Congress and propelled the United States toward one of the worst constitutional crises in recent memory. Since then, hundreds of attempted coup-ers have been arrested for a bevy of crimes, from assault to trespassing to disorderly conduct, while the politicians who animated the crowd have largely escaped any serious repercussions for their actions.

Those who have been arrested, however, are now grappling with the reality of their actions, and the possibility that there might be serious consequences for having participated in an attempt to overthrow a legitimate election in service of its undeniable loser. And faced with that very plausible outcome, some of those accused of participating in the Jan. 6 insurrection have chosen to look at their unenviable circumstances and say with a proud, clear voice: "My fault? nah, couldn't be!"

Broadly speaking the insurrectionist excuses fall into one or more of three general categories:

Trump made me do it.

This, of course, is the basis for former President Donald Trump's second impeachment trial, in which he was ultimately acquitted. But while it's fairly obvious that Trump's words and subsequent actions (and inactions) were instrumental to the violent breach of the Capitol building complex, it's hard to say whether the many, many, many insurrectionists who have attempted to mitigate their own culpability by blaming the president for their actions will actually achieve any legal traction with this defense. Already, at least one accused insurrectionist has tried to make this the centerpiece of their defense, only to have it rejected outright by their presiding judge.

Putting aside the fact that this is really just aggrieved shorthand for "people facing accountability for their actions," there is nevertheless a growing trend of accused Capitol riot participants citing cancel culture not as the reason why they stormed Congress in the first place, but why they can't get a fair trial in the city where they did so.

In one brief requesting a change of venue out of Washington, D.C., for her client, an accused insurrectionist who traveled from Texas to take part in the "Stop the Steal" rally, attorney Marina Medvin wrote that:

In other words, Medvin is claiming that D.C. jurors are apparently so committed to liberal cancel culture, that any potential guilty verdict would be tainted as a result of some sort of vendetta against conservatives, rather than an assessment of the facts.

Another change of venue brief filed by a different attorney and obtained by BuzzFeed News makes a similar argument, claiming that "out of those prospective D.C. jurors, how many will disobey ‘cancel culture’ and the social pressure to punish Mr. Worrell for being politically incorrect?" As BuzzFeed News notes, Worrell is accused of using a chemical irritant against police officers.

Like the "Trump made me do it" excuse, leaning on cancel culture as a reason why an accused person wouldn't receive a fair trail is the sort of onus-shifting tactic that allows insurrectionists to hide behind the claim that whether or not their behavior was criminal isn't the point — what's important is that they're an unfairly persecuted minority in an unfair society.

In part, this is something of an offshoot of the "Trump made me do it" defense. As articulated by attorney Albert Watkins, whose client Jacob "QAnon Shaman" Chansley is perhaps the most recognizable figure of the entire Jan. 6 insurrection, this argument essentially throws participants under the bus by claiming that they were simply not mentally capable of resisting Trump's encouragement and propaganda.

In an interview this week with Talking Points Memo, Watkins laid his argument out in shockingly crass, offensive language (for which he has since refused to apologize):

“A lot of these defendants — and I’m going to use this colloquial term, perhaps disrespectfully — but they’re all fucking short-bus people,” Watkins told TPM. “These are people with brain damage, they’re fucking retarded, they’re on the goddamn spectrum.”

“But they’re our brothers, our sisters, our neighbors, our coworkers — they’re part of our country. These aren’t bad people, they don’t have prior criminal history. Fuck, they were subjected to four-plus years of goddamn propaganda the likes of which the world has not seen since fucking Hitler.

Unlike the straightforward "Trump made me do it" claim, Watkins's point is that many of the insurrectionists were uniquely susceptible to Trump's influence because of their mental state. It's not simply that he gave them permission to do something wrong, it's that they were, for any number of reasons, not in a position to evaluate and resist his influence to begin with.

All told, it remains to be seen whether any of these legal defense strategies will actually hold water in court. It's entirely likely that some will, and others won't, based on the particulars of any given accused insurrectionist's case. But taken en masse, it's clear that there is a trend among those who participated in the events of Jan. 6 to point to forces larger than their individual actions as one of — if not the largest — factors behind what they did that day.