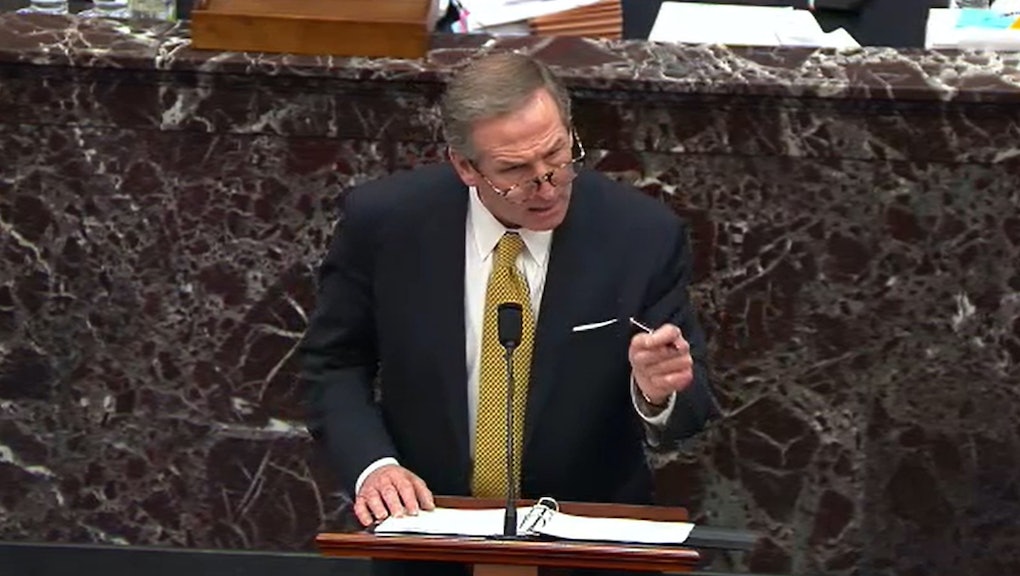 Trump's lawyers aren't even trying at this point

If there's an underlying premise to former President Donald Trump's impeachment defense strategy, it basically amounts to: "We can do and say anything we want, and Senate Republicans will vote acquit him anyway, so who cares? None of this matters. Let's just get weird with it."

If the Democrats' deeply researched, meticulously argued, step-by-step walk-through of the former president's role in the Jan. 6 insurrection attempt was depressing (it sure was!), then whatever it was that Trump's D-squad of impeachment lawyers was doing on Friday is downright bleak. Rather than launching a defense based on facts, evidence, and reason, Trump's legal team used their opening hours of testimony to re-litigate, of all things, the former president's public defense of the white nationalists who marched in Charlottesville, Virginia. The lawyers attempted to split hairs over a tweeted homonym, and — in a more than 10-minute video presentation that reportedly left both Democrats and Republicans laughing in disbelief — presented a heavily edited video montage of Democratic politicians (and also Madonna) using the word "fight," to imply that it's actually the Democrats who are the violent riot-inciters.

Stupid? Yes. Effective? Not in the least. Will it matter? Nope!

Trump's attorneys' argument, scattershot and deranged as it was, was essentially that the president can't be blamed for the coup attempt on Jan. 6 because he's actually made speeches where he's called himself pro-police, and besides, Democrats have urged people to "fight" against Trump and also coronavirus and also-also general oppression so why aren't THEY being prosecuted, huh? (That Democrats' extremely benign use of the word "fight" in campaign speeches and ads hasn't immediately preceded bloodshed at the nation's Capitol somehow didn't factor into the Trump team's case.)

Let's go to the tape.

Here's Trump attorney David Schoen complaining that Democrats' extensive video footage of Trump's long history of inflammatory, incendiary rhetoric was, he claimed, deceptively edited — just like the "Charlottesville lie" in which the president, per Schoen, very clearly described a white nationalist march that had been expressly publicized as such as having involved "very fine people."

Does this have any relevance to the Jan. 6 insurrection? Not really, but that wasn't the point. Think of Trump's legal strategy as not so much "legal" and more "propaganda" instead. Secure in the knowledge that the GOP is almost certainly not going to convict Trump of anything, the Trump team is free instead to use this platform to do what the former president himself would do in this situation: obfuscate, smear, and ultimately skate away unscathed.

Consider that Trump's attorneys feigned concern over what they claimed was deceptively edited footage, and then immediately followed it with a 10-minute supercut of extremely edited video clips, complete with a soundtrack.

Do Trump's attorneys really think the public is dumb enough to think there's any sort of meaningful comparison between saying you'll "fight" coronavirus and the president telling a mob of frenzied supporters to "fight like hell" — which they ended up doing — at the Capitol building? Maybe! Or maybe they just know it doesn't matter either way.

Here's how little the former president's legal team thinks of their charge to defend the president: They insisted that the president's retweet (remember when he could do that?) of a tweet calling for the "calvary" to come to his Jan. 6 rally was actually a deliberate reference to the crucifixion of Jesus, and not an extremely obvious misspelling of a call to arms for Trump's "cavalry."

If you're inclined to laugh at the sheer, shameless buffoonery of it all, I can't blame you. This whole thing is like if open mic night at the comedy club were overrun with Law & Order cosplayers, and also everyone was on acid. But, funny as it is — and it is! — it's also a profoundly disheartening power move on the part of Trump and his legal team. Why bother putting in the hard work of actually fighting the charges against him, if they can just screw around for a while and still get the same easy acquittal they'd earn regardless? To quote Trump himself: "They're not sending their best."

In this case, unfortunately, it seems like that's a deliberate flex on the very concept of impeachment to begin with.

More like this
Buckle up: The investigation into the Jan. 6 insurrection is just getting started
By Rafi Schwartz
Texts from Matt Gaetz's "wingman" allege that the congressman paid for sex with a 17-year-old
By Rafi Schwartz
Liz Cheney is ousted from GOP leadership as the Trump cult takes over
By Rafi Schwartz
Stay up to date