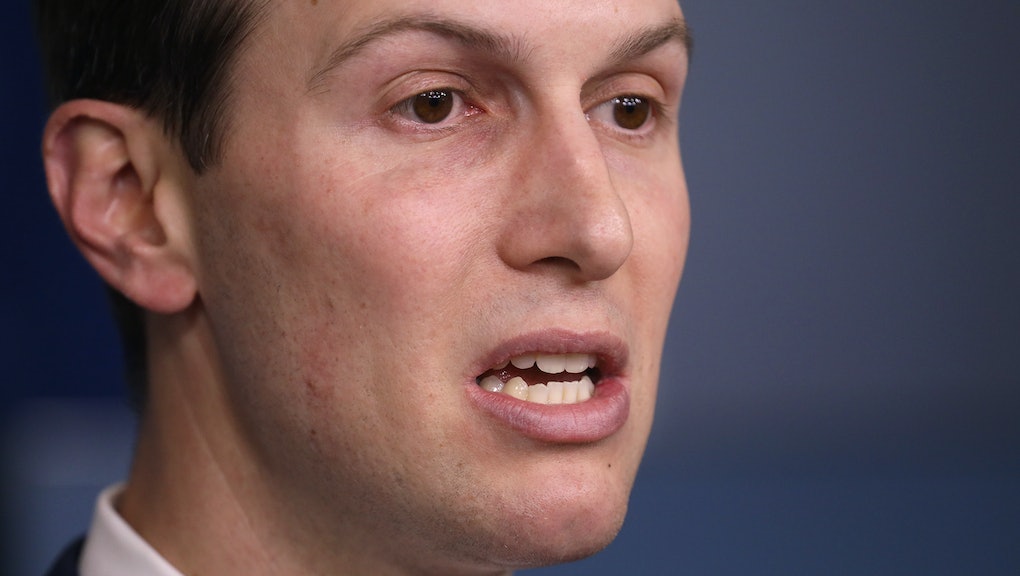 Whether it's working to bring peace to the Middle East or attempting to reform the entire federal government, it seems like there's nothing first son-in-law Jared Kushner can't do. Now, in his official capacity as senior adviser to the president, he's added another bullet to the résumé: attending President Trump's daily coronavirus briefing.

Kushner, who has been unofficially tasked with leading the Trump administration's thus-far catastrophic response to the coronavirus pandemic, made his first public appearance at the event Thursday evening. Rather than reassuring the nation, Kushner instead awkwardly revealed he has a fundamental misunderstanding of how the government works. (At least his other ventures have gone so well!)

"Some governors you speak to, or senators, they don't know what's in their state," Kushner told reporters, in regards to multiple states accusing the government of slow-walking the dispersal of life-saving ventilators and other medical equipment from the government's Strategic National Stockpile. "You have to take inventory in your own state," Kushner said, "and you have to show that there’s a real need."

"The notion of the federal stockpile was it’s supposed to be our stockpile," Kushner insisted, apparently taking "our" to refer to the federal government and not the American public. "It’s not supposed to be states’ stockpiles that they then use. So we’re encouraging the states to make sure that they’re assessing the needs, they’re getting the data from their local situations, and then trying to fill it with the supplies that we’ve given them."

For reference, this is how the Strategic National Stockpile for public health emergencies used to describe itself:

When state, local, tribal, and territorial responders request federal assistance to support their response efforts, the stockpile ensures that the right medicines and supplies get to those who need them most during an emergency. Organized for scalable response to a variety of public health threats, this repository contains enough supplies to respond to multiple large-scale emergencies simultaneously.

Kushner's seeming inability to understand or care about the crucial role of the federal government to help the country respond to crisis is just the latest in a long line of truly alarming reasons why his role as point person for the administration's pandemic response team is so terrifying.

To begin with, Kushner is not so much a "public health expert" as he is a wealthy property manager who keeps falling backwards into something resembling success. As New York Times opinion columnist Michelle Goldberg succinctly put it this week: "Kushner has succeeded at exactly three things in his life. He was born to the right parents, married well, and learned how to influence his father-in-law."

In fact, despite working alongside actual public health officials, like the now seemingly ubiquitous Dr. Anthony Fauci, Kushner's coronavirus response so far instead included outreach to his brother's father-in-law to poll his doctor friends for suggestions on Facebook. And despite New York Gov. Andrew Cuomo's repeated pleas for more life-saving medical equipment to stave off total catastrophe in the state, which is currently the epicenter of the U.S. coronavirus outbreak, Kushner reportedly told colleagues that "I have all this data about ICU capacity. I’m doing my own projections, and I’ve gotten a lot smarter about this. New York doesn’t need all the ventilators."

Who would know better: a governor managing a medical crisis, or a property manager who allegedly skipped a bunch of pandemic task force meetings and asked his extended family to solicit advice on Facebook instead?

Which isn't to say Kushner's first foray into the coronavirus-tinted spotlight Thursday was a total bust. In a rare moment of accidental honestly, he offered this surprisingly accurate bon mot:

"What a lot of the voters are seeing now is that when you elect somebody ... think about who will be a competent manager during the time of crisis."

Yes, truly something to think about during this time of crisis.

Editor's note: This story was updated to reflect changes made to the Strategic National Stockpile's website.

This article was originally published on April 3, 2020