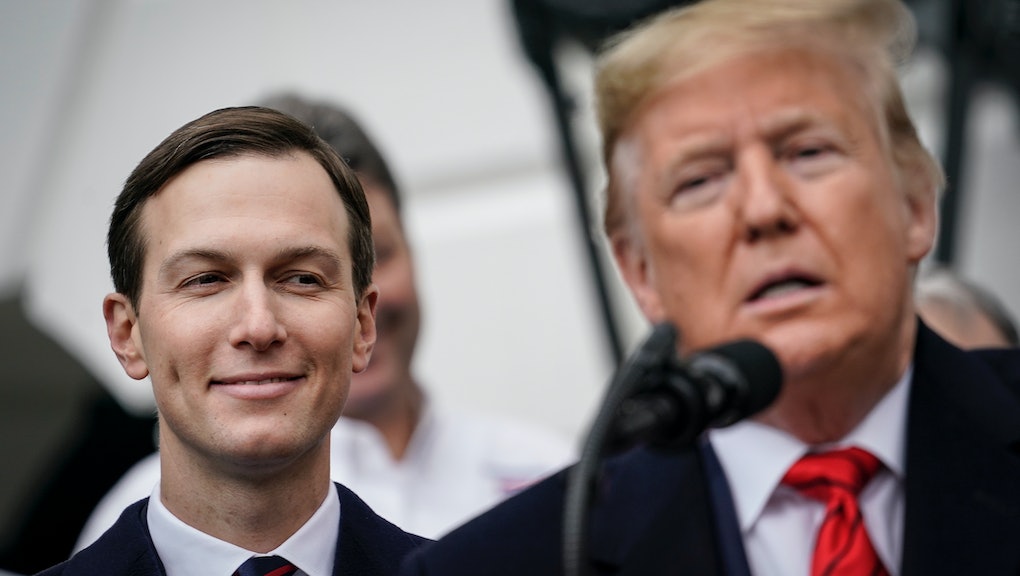 There's a fairly good chance that if the last few months of coronavirus pandemonium haven't scared the bejeezus out of you already, the events of this past week sure have. But breathe easy (and at least 6 feet away from anyone else, please) folks; fresh off of successfully bringing peace to the Middle East and reforming the whole of the federal government, first son-in-law Jared Kushner is on the case.

So where, you might ask, is Kushner getting his information? Apparently from his brother's father-in-law's Facebook friends.

"I have direct channel to person now in charge at White House," Dr. Kurt Kloss reportedly wrote in a closed Facebook group for emergency room physicians, ahead of Trump's Wednesday speech. Kloss, whose daughter, the model Karlie Kloss, is married to Jared's brother Joshua, expanded on his mission elsewhere in the group, writing:

"Tonight I was asked by Jared through my son-in-law for my recommendations, that’s when I turned to you my fellow BAFERD’s [Bad Ass Fucking Emergency Room Doctors] for help," Politico reported. "Between patients tonight I have reviewed your responses and will summarize what I am sending to Jared for your PEER review before I send it."

He later updated the more than 21,000 group members that "Jared is reading now."

While surveying an array of medical professionals for their thoughts on the ballooning pandemic is not, in and of itself, necessarily a bad thing, the fact that Kushner — a millionaire property owner and failed media magnate with the whole of the federal government's resources at his disposal — felt compelled to turn to informal familial connections to fuel his stewardship of this crisis does not exactly inspire confidence. And, in fact, it seems as if the Facebook outreach may have indeed helped delay the Trump administration's anemic response to the pandemic in the first place.

According to a report from Politico earlier this week:

One of the people familiar with the talks said Trump's aides will not give the president a final verdict until Jared Kushner, the president's senior adviser and son-in-law, talks to relevant parties and presents his findings to the president.

Presumably, those "relevant parties" included his brother's father-in-law's many thousands of Facebook pals, who would likely recommend that Kushner consider testing himself for the virus after meeting last week with Brazilian President Jair Bolsonaro, who it was reported Friday had tested positive for the disease though he later denied those reports.