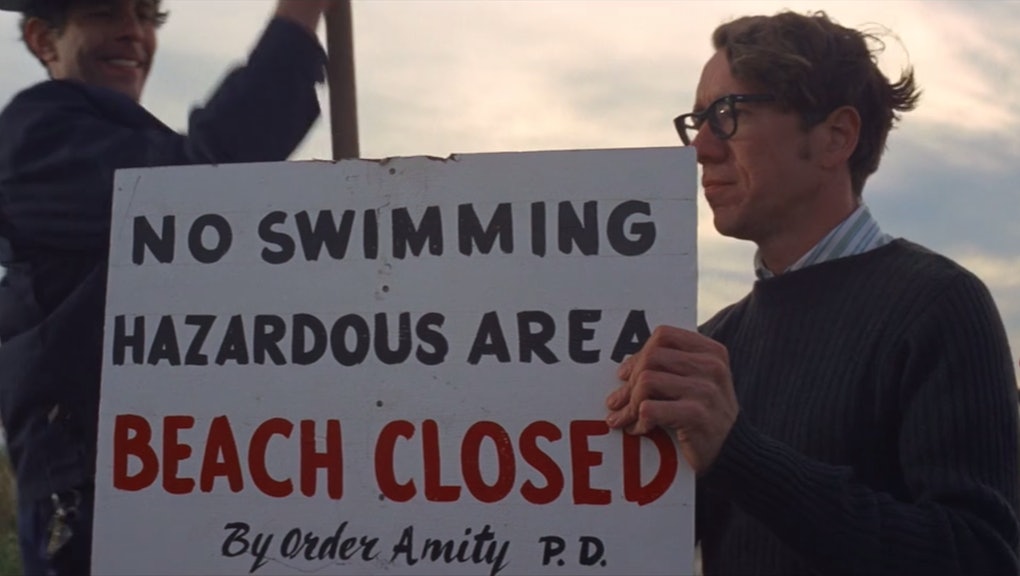 'Jaws' is a prescient fable for the coronavirus era

Who would've thought a film from 1975 would have so much resonance in the summer of 2020? An invisible killer is claiming lives. One of the most obvious ways to stay safe is by avoiding the beach. But the politicians in charge downplay the threat, risking more death in the name of normalcy and the economy. So the beach stays open on the 4th of July. People flock there, and lo and behold, somebody dies.

Watching Jaws for the first time the other night, I was dumbfounded by how many parallels this tale of a monstrous shark has with the ongoing coronavirus pandemic. Namely, how much the mayor of Amity Island sounds like Donald Trump and other COVID-denying politicians. (Turns out, Mayor Vaughn, played by Murray Hamilton, has become somewhat of a coronavirus meme this spring.)

Water-fearing police chief Martin Brody (Roy Scheider) could be a stand-in for Dr. Anthony Fauci, America's top infectious disease expert. He's the first to understand what a serious threat the island faces and tries to take assertive action to shut down Amity's beaches before anyone else gets eaten.

Nobody listens to Brody/Fauci, of course. He settles for patrolling from a safe distance, watching helplessly along with everyone else as the shark plucks more victims, including a dog and a young child, from the waves. Somehow, this still doesn't convince the mayor to shut things down. He sweeps the kid's death under the rug and encourages amateur fishermen to go after the beast. Come the 4th of July, Amity's beaches are thronged with tourists.

One of the most striking scenes in Jaws unfolds between Brody and the mother of the killed child, Mrs. Kintner (Lee Fierro). She confronts him for not warning people of the danger lurking in their midst. “You knew there was a shark out there,” she says. “You knew it was dangerous but you let people go swimming anyway. You knew all those things. But still my boy is dead now. And there's nothing you can do about it."

Mrs. Kintner's words take on eerie prescience in 2020. Fierro died in April from complications of COVID-19. She was 91 and residing in an assisted living facility. In the wake of her death, The Los Angeles Times journalist Mary McNamara wrote, “We are all Mrs. Kintner now.”

Ultimately, Mayor Vaughn doesn't take the man-eating shark seriously till it threatens his own family. After the monster attacks on the 4th of July, as predicted, the visibly-shaken politician tells Brody, "My kids were on that beach, too." The police chief uses his leverage to commission a shark hunter, Quint, to take care of the problem, thus kickstarting the bloody voyage comprising the second half of Jaws.

The mayor's change of heart made me think about what it might take to make Trump and his coronavirus-denying political cohorts to change their tune about things like wearing masks and social-distancing. Would it take Ivanka or Don Jr. getting sick? What about Baron or Melania? Would he care about protecting Americans if they were ill? Of course, the people most at risk of dying from COVID-19 are those Trump cares about the least: people of color, undocumented immigrants, and other folks on the margins.

Jaws, unlike the coronavirus pandemic, has a set ending. After two tense hours, Brody saves the day with the help of science, white-knuckled bravery, and good aim. "Jaws is about a lot of things, including fear, death, science, accountability and the necessity — and fragility — of social solidarity. It’s about knowledge and what people do with it," The New York Times critic Manohla Dargis recently wrote. "Movies love the romance of the white-hatted hero, but in real life we also need to save ourselves." Unfortunately, you can't eradicate a virus by shooting it in the mouth.

More like this
In 'Roadrunner,' Anthony Bourdain shows us the beauty of the mundane
By John Saward
Disgraced congressional candidate Roy Moore tried to sue Sacha Baron Cohen. It didn't go well
By Kara Weisenstein
8 shows like 'Ted Lasso' to watch if you need more feel-good TV
By Brandon Yu
Stay up to date