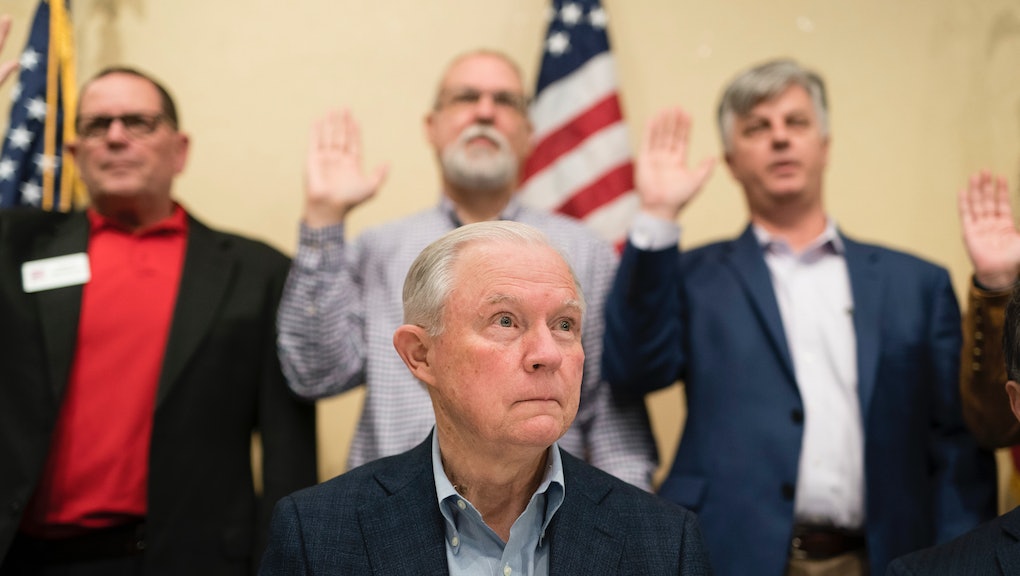 In 2018, the Trump administration decided to utilize a "zero-tolerance" policy when it came to immigration-related offenses. This mandate required prosecuting all immigrants who attempted to cross the U.S. border — and in doing so, resulted in the separation of migrant children from their parents, due to a settlement agreement that limits the amount of time children can be detained. All the while, as the ghoulish policy and upsetting dispatches from the border resulted in a huge influx of criticism toward the administration, President Trump and his officials maintained that they had no policy mandating the separation of children from their parents, riding the line of a technicality that ignored reality. Now, a watchdog report shows exactly how intentional the choice by Trump officials to separate families was.

In a review of draft results from an investigation by Justice Department Inspector Michael Horowitz, The New York Times reported that then-Attorney General Jeff Sessions and then-Deputy Attorney General Rod Rosenstein were instrumental in implementing Trump's policy. Not only that, but the directive was explicitly to separate children from their parents after they crossed the border.

Per the Times, five U.S. attorneys — including three appointed by Trump — voiced their discomfort at the 2018 order to prosecute undocumented immigrants even if it meant separating children from their parents. "We need to take away children," Sessions said in response, according to participants' notes. The Times reported that one participant had written the following in their notes in shorthand: "If care about kids, don't bring them in. Won't give amnesty to people with kids." A week later, Rosenstein said in a separate call to five prosecutors that it didn't matter how young children were, they needed to be separated.

While the Times reported that Sessions declined to be interviewed for Horowitz's report, Rosenstein defended himself. He said in a statement, "If any United States attorney ever charged a defendant they did not personally believe warranted prosecution, they violated their oath of office. I never ordered anyone to prosecute a case."

But according to the Times, Horowitz's draft report states, "The department's single-minded focus on increasing prosecutions came at the expense of careful and effective implementation of policy, especially with regard to the prosecution of family-unit adults and the resulting child separations."

The report has drawn ire from some Democratic politicians. On Twitter, California Gov. Gavin Newsom (D), tweeted, "Sick and disturbed don't even begin to describe this."

The exact number of children separated from their families by the Trump administration is unclear, according to a 2019 inspector general report. At the time, the U.S. Department of Health and Human Services had identified 2,737 children in its care who were separated from their parents. However, there could be "thousands" more.

Regardless, the trauma for children who were forcibly separated from their parents has lingered. Last year, a report confirmed that the policy resulted in "intense trauma" for the affected children. In many cases, children were unaware of what had happened to their parents, which caused them additional stress. For example, a 7- or 8-year old boy "believed that his dad was killed and he would also be killed" and "ultimately required emergency psychiatric care to address his mental health distress."

These impacts, however, were not unknown before the Trump administration implemented its policy. In fact, all you had to do was look back at World War II to know that separating children from their parents is an intensely traumatic experience. It is hard to imagine that everybody in the Justice Department of the Trump administration overall was ignorant to this — and instead a lot easier to believe that they just came to the conclusion that the wellbeing of these children, and these families, ultimately did not matter more than using the border to make a point.

More like this
New York has set aside a massive, first-of-its-kind fund for undocumented workers
By Rafi Schwartz
Nearly half of Republicans believe absolute nonsense about Trump's Capitol coup
By Rafi Schwartz
Georgia's voter suppression law is bad, Coca-Cola and Delta have finally decided
By Rafi Schwartz
Stay up to date