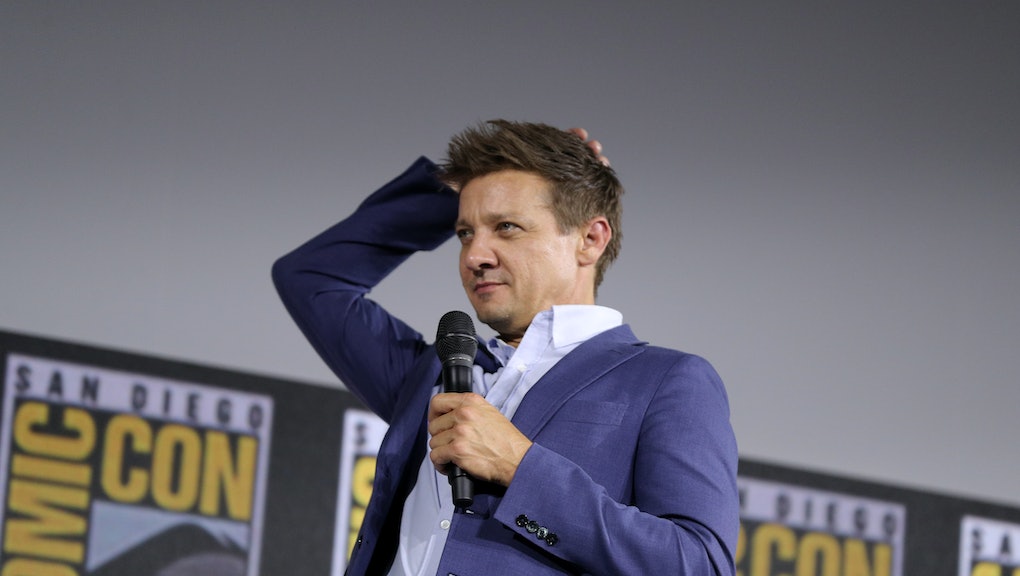 Jeremy Renner has an app, does he even know about it?

Every aspect of Jeremy Renner’s public life would be better if it were an elaborate hoax — the reality is starting to become a bit unsettling. From a day’s worth of moderately intense investigation, it would appear that we’re living in a world where Jeremy Renner, an actor-turned mediocre rocker who loves duster coats and pitchy vocals, is supported by an intense and somewhat mystifying legion of fans.

Renner, for those unfamiliar, is primarily an action movie actor whose work can be seen in films like The Avengers, The Avengers: Infinity War, and The Avengers: Endgame, as well as other films in the Marvel Cinematic Universe. In those movies, he plays Hawkeye, a normal, non-superheroed man with an exceptionally precise ability to shoot with a bow and arrow, and the wardrobe of an extremely sullen teen who was given a $500 gift card to Hot Topic.

But Renner, like so many of us, contains multitudes. He’s not just an action star, he’s also a rock music vocalist, releasing songs like “Nomad,” “Main Attraction” and “Sign.” The latter provided the soundtrack for a perplexing Jeep commercial which also starred Renner, as himself, where he takes a strangers’ Jeep into the middle of the dessert for a melodramatic joyride. The music could be viewed as at best, the result of allowing Imagine Dragons any modicum of fame, and at worst it is the consequence of allowing men to follow their dreams without criticism or standards.

Renner’s whole “pleather renegade rockstar” charade is actually quite popular. People really like Renner. For example, take a look at this passionate Youtube viewer’s comment about his vocal chops.

“First off, I just want to comment, he is Jeremy Renner, not just Hawkeye,” one commenter wrote beneath Renner’s song “Nomad” on Youtube. “This man is so multitalented and I don't think there is not a thing in this world he couldn't do. He is an actor, producer, home restoration expert, entrepreneur and now which he has always been a singer/musician. Self-taught in all his musical talents. He is a Shooting Star, burning bright and unstoppable.”

While there’s room to debate about what kind of star Jeremy Renner is, there is a dark side to his public profile.

It’s the Jeremy Renner app for Renner stans (Rans? RennerNation?). It’s hard to tell if this was actually cosigned by Renner, created as an elaborate prank, or is currently putting one million viruses on my phone. But whatever the app was intended to do, the outcome is extremely odd.

On the main page, there are just photos and videos allegedly posted by Renner that are pretty similar to Renner’s official Instagram feed, with comments like “Happy Rennesday” and “Have a rockin weekend everyone!!” The app also features a section just for his music to be played, connected through Spotify.

There are commenters like “Hawkeyefan69” who post the expected innocuous comments like “ur so Awesome” and “great smile.” But then there are people with usernames like “Bill Cosby” “Casey Anthony” “Ted Bundy” and “O.J Simpson” who are also leaving adoring comments underneath photos of Renner posing with fellow Avengers cast members. Then, in the fan section of the app where anyone can post, the content gets much more disturbing. “Casey Anthony” posted a photo of the real Casey Anthony – a Florida woman who was accused, then acquitted on charges of murdering her daughter Caylee, with the caption “Candid photo time!!! Hey Jeremy Renner. I am your BIGGEST FAN… so was my kid. Hope you see this.”

Is the Jeremy Renner fan app real? Has it been taken over by trolls and bots? Is Jeremy Renner aware that his app is filled with horrible posts like the one above? Is this really Jeremy Renner’s official app?

The Renner app is a bizarre peek at the dark crosssection of meme culture and celebrity culture, where trolls and real users scroll, confusedly, side-by-side, leaving eerily similar adoring comments underneath photos of a man who seems like he himself should be an internet joke. But the Renner world is tinged with just enough unpleasantness that it can’t even be funny — just sad.

More like this
Phoebe Bridgers and John Mulaney announced tour dates and the internet imploded
By Chloe Stillwell
Facebook is making emojis you can hear
By Chloe Stillwell
Issa Rae, Lil Nas X, and J-Lo just gave us a masterclass in social media
By Keith Nelson Jr.
Stay up to date