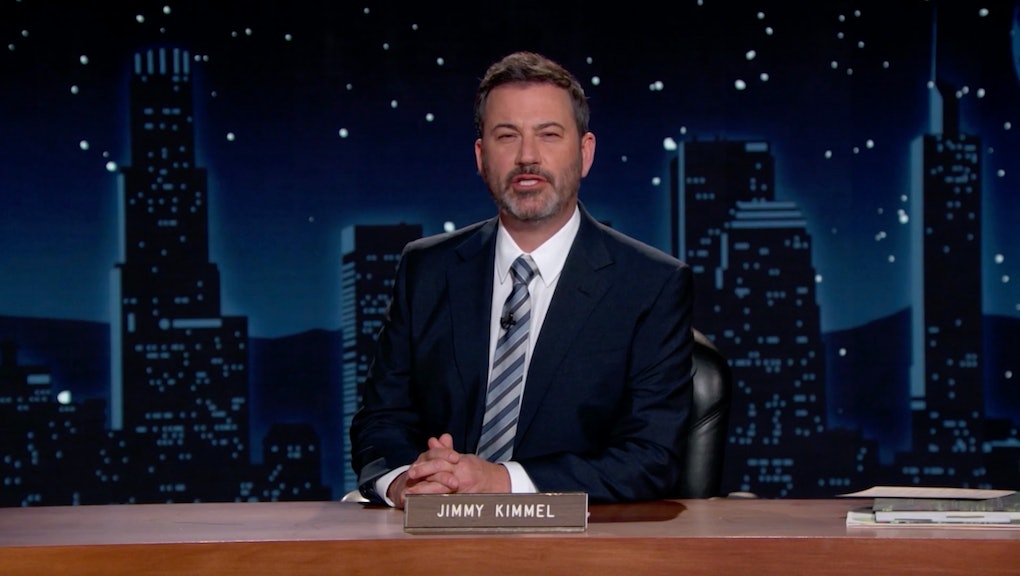 Jimmy Kimmel has no sympathy for the unvaccinated

When Jimmy Kimmel went on summer hiatus in June, he figured the pandemic would be mostly over by the time he came back in September. He told his still-masked at half capacity audience in Los Angeles and viewers at home that he'd been excited to make out with guests again (a joke, obviously). Instead, more than 100,000 Americans are in the hospital with Covid-19 right now — a 300% increase from this time last year — and most of them are unvaccinated. During his back-from-vacation monologue on Tuesday night, Kimmel unleashed his anger on that particular demographic.

"Dr. Fauci said if hospitals get any more crowded they're going to have to make some very tough choices about who gets an ICU bed," the late-night host said. "That choice doesn't seem so tough to me," Kimmel continued. "Vaccinated person having a heart attack? Yes, come right on in, we'll take care of you. Unvaccinated guy who gobbled horse goo? Rest in peace, wheezy." The audience cheered.

Kimmel bluntly said what a lot of weary, vaccinated folks have been thinking lately: the people who refuse to get a free, studied, life-saving, FDA-approved shot are largely responsible for the resurgence of the pandemic. It's also true that hospitals are so full of Covid patients, doctors are struggling to take care of people with other medical emergencies. A day ago, CBS News reported on a rural hospital just 76 miles from Houston, Texas, struggling to secure a transfer for an unresponsive cancer patient. The best cancer hospital in the world is in Houston, along with 85 other hospitals, but none of them had an ICU bed available, because they're all occupied by people with coronavirus.

Kimmel also unleashed on the "pan-dimwits" taking ivermectin, generally used as a horse dewormer, as a Covid cure. "Poison-control centers across the country have seen a spike in calls from people taking livestock medicine to fight the coronavirus, but they won’t take the vaccine, which is crazy," Kimmel said. "It's like if you're a vegan and you’re like, 'No, I don’t want a hamburger — give me that can of Alpo instead.'"

He also had an incisive direct argument for the anti-vaxxers worried about microchips and bioweapons or whatever. "One of the reasons these Sea Biscuits are opting for ivermectin is because they don’t trust 'big pharma.' Which is fine, I guess, except for the fact that ivermectin is made by Merck, which is the fourth-largest pharmaceutical company in the world," Kimmel noted.

"Big pharma" has no problem getting people hooked on super-addictive painkillers, but even they are begging people not to ingest horse pills. "Listen, if a pharmaceutical company says, 'Please don’t take the drug we’re selling,' you should probably listen to them," Kimmel said. "Or you could just go with a TikTok posted by a disgraced veterinarian instead. Meanwhile, these poor horses are like, 'Hey, I have worms — I need that stuff. There are worms in my butt, do you understand?'"

It's somewhat cathartic to make fun of people who are so skeptical of science yet so willing to believe what they read online. But it's important to remember that the current "plague of the unvaccinated" that we're witnessing is a real tragedy. When doctors take the Hippocratic Oath, they pledge to save lives regardless of a person's ideology. It's bound to be crushing to witness so much preventable sickness and death, and on top of everything, not be able to provide adequate care to others who need it. I think it's okay to be angry at anti-vaxxers, but as we stare down another pandemic winter, we need to show compassion for all the healthcare workers still battling the virus on the front lines.

More like this
A new season of 'Tiger King' is the last thing the world needs right now
By Chloe Stillwell
LeVar Burton doesn't want to host 'Jeopardy!' anyway, thankyouverymuch
By Kara Weisenstein
After shutting up for a minute, celebrities want everyone to listen to them again
By Brandon Yu
Stay up to date