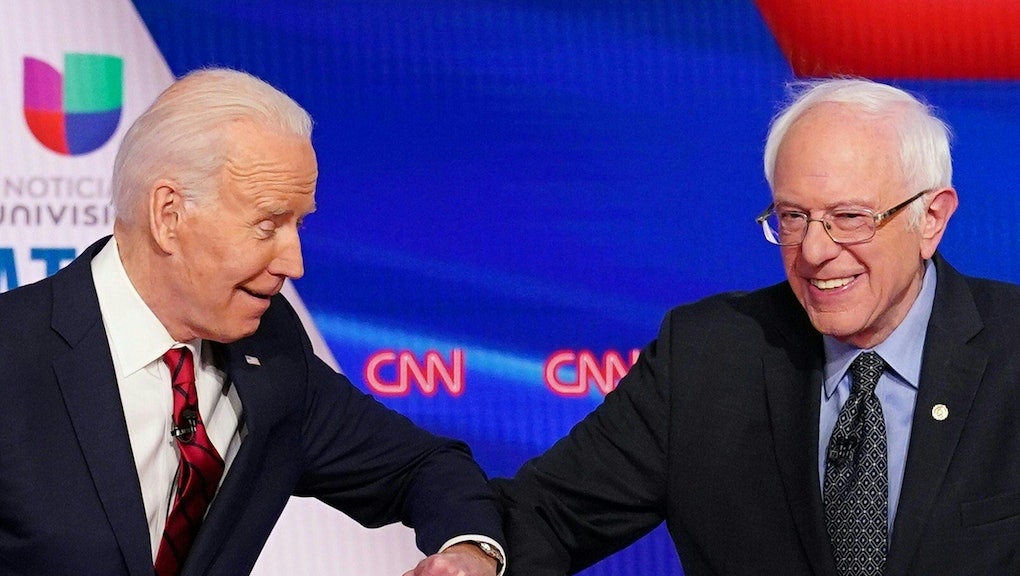 One of the most enduringly frustrating tropes of the early-mid stages of the 2020 Democratic Presidential Primary race was the persistent handwringing over a supposed schism between the center and left wings of the party. Would, the pundits wondered, supporters of progressive standard bearer Sen. Bernie Sanders ultimately back former Vice President Joe Biden, should the latter secure his party’s nomination?

Well, Biden has, indeed, effectively locked down the Democratic nomination ahead of the DNC, and Bernie has, as promised, endorsed his erstwhile rival. And this week, the pair unveiled a series of policy proposals for Biden's theoretical presidency that both shows just the lengths to which the Biden campaign is eager to capitalize on Sanders' progressive agenda and earn the support of his progressive base, and the degree to which Sanders's camp has pulled Biden to the left on a number of significant fronts.

The 110 page document is the work of the "Biden-Sanders Unity Task Force" — a series of six working groups empaneled this past May, consisting of party notables and surrogates for both Biden and Sanders. Each group was tasked with tackling a specific issue: climate change, criminal justice, education, health care, immigration, and the economy. The goal, Biden explained when the groups were created, was to "[identify] ways to build on our progress and not simply turn the clock back to a time before Donald Trump, but transform our country."

Sanders was slightly more blunt in his assessment of the task force's purpose, saying in April when he endorsed Biden that "it's no great secret out there, Joe, that you and I have our differences, and we're not going to paper them over; that's real."

"But," Sanders continued, "I hope that these task forces will come together utilizing the best minds and people in your campaign and in my campaign to work out real solutions to these very, very important problems."

So what have the groups come up with?

On healthcare — arguably the issue on which Sanders and Biden clashed the most — the group fell short of agreeing on full Medicare for All, endorsed a public option for healthcare available through the Obamacare marketplace that would be run by the medicare administration, and not by private companies. The group also proposed allowing anyone not automatically enrolled in the public option to given the choice to opt-in, even if their employer offers private insurance "because Democrats believe working people shouldn’t be locked in to expensive or insufficient health care plans when better options are available."

When it comes to education, the group again compromised between Sanders' plan to eliminate all student debt, and Biden's much more restrictive proposal to only eliminate debt based on income, and where a person went to school. Among recommendations for broader spending on education and child development writ large, the education group suggested "up to $50,000 in student loan debt for educators."

On the issue of climate change, the working group — helmed by Rep. Alexandria Ocasio Cortez on the Sanders side, and former Senator and Secretary of State John Kerry for Biden's camp — again forged a middle path that pointedly did not include reference the "Green New Deal" unveiled last year by Ocasio Cortez, nor Biden's refusal to ban fracking entirely. It did, however pledge to reach zero greenhouse gas emissions within the next 30 years, with a benchmark for all new buildings to be net-zero greenhouse gas emitters within the coming decade.

For its part, the criminal justice group recommended a plan to "decriminalize marijuana use and reschedule it through executive action on the federal level" and expunge past marijuana convictions from a person's criminal record, but would not commit to full legalization as Sen. Sanders had proposed.

All told the document is an impressive testament to, if nothing else, the appetite from both the Sanders and Biden camps to present a unified front going into the general election, while mending any rift between the centrist and progressive wings of the party.

"The goals of the task force were to move the Biden campaign into as progressive a direction as possible, and I think we did that," Sanders told NPR on Wednesday. "On issue after issue, whether it was education, the economy, health care, climate, immigration, criminal justice, I think there was significant movement on the part of the Biden campaign."

"Though the end result is not what I or my supporters would have written alone, the task forces have created a good policy blueprint that will move this country in a much-needed progressive direction and substantially improve the lives of working families throughout our country," Sanders added, tacitly acknowledging potential disappointment from progressive activists who might see the recommendations as not enough, in a statement to the New York Times.

It remains unclear how much of the task force's recommendations will ultimately be incorporated into the Biden campaign's platform.

"Phase two is continuing to shape and alter the Biden campaign’s positions,” Sander's former campaign manager Shakir told Vox. “We obviously are advocating for some of these members to be involved in transition planning. They send a symbolic message of what kind of administration are you trying to form. Here, you’ve got a progressive policy blueprint; now you need the progressive policy personnel to make it happen."

More like this
Biden has hit his 100th day in office. So what's next?
By Rafi Schwartz
In his first address to Congress, Biden took on the country's vices: guns and police brutality
By Rafi Schwartz
Title IX will once again protect against gender identity discrimination
By Rafi Schwartz
Stay up to date