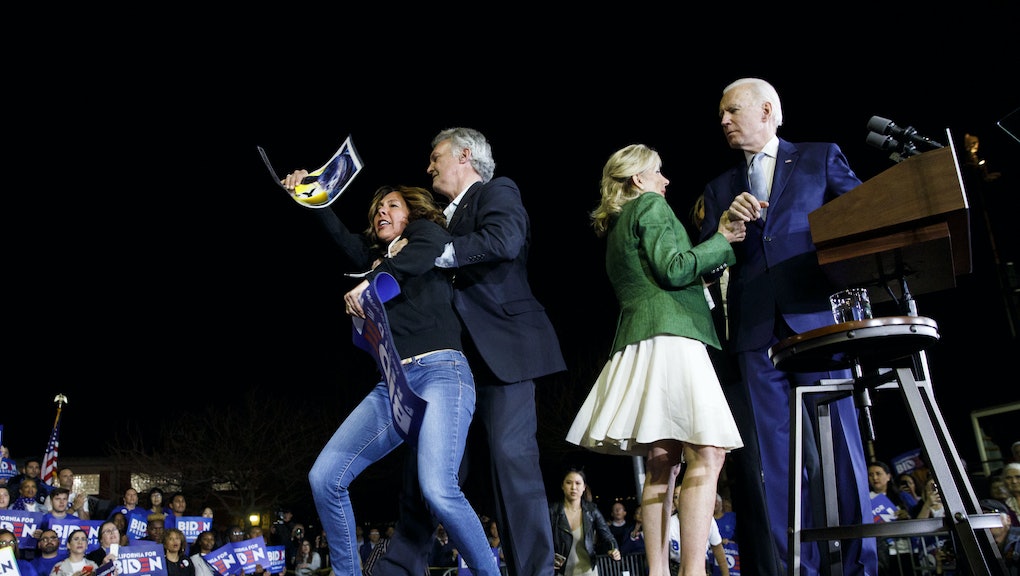 With his stunning political comeback firmly in hand, former Vice President Joe Biden emerged from this week's Super Tuesday Democratic presidential primary race the frontrunner for his party's nomination, both in terms of delegates (currently he has 511 to Bernie Sanders' 459) and effusive cable news punditry.

Victories notwithstanding, however, Biden's Tuesday evening was punctuated by a number of moments that threatened to overshadow his electoral accomplishments, and highlight his uniquely Biden-esque challenges ahead.

To begin with, Biden's proclivity for increasingly frequent verbal missteps was on full display from the moment he took the lectern during his victory rally Tuesday night in Los Angeles. There, in front of a crowd of cheering supporters, he mistook his wife for his sister and vice versa, in the sort of public gaffe that has become a mainstay of his public appearances. "You switched on me!" he exclaimed when he realized the mix-up.

Biden's wife, Dr. Jill Biden, could be seen mouthing "no" when her husband mistook her for his sibling. But this is Joe Biden we're talking about here; the man is famous for, among other things, his "aw shucks" mush-mouthedness.

Minutes after the mix-up, Biden's speech was interrupted not once, but twice by protesters who — taking apparent advantage of Biden not currently having Secret Service protection — rushed the stage, only to be hauled off by event security and, in the case of the second protester, campaign adviser Symone Sanders who propelled herself at the interloper like all-time hockey defenseman Ray Bourque.

Sanders later tweeted the extent of he injuries during the altercation.

Jill Biden also stepped in to protect her husband from a protester storming the stage:

President Trump and some in his inner circle have tried to attack Biden's speaking missteps, but have drawn ire in response because Biden overcame a childhood stutter.

In a sense, this all could be seen as something of a metaphor for Biden's entire presidential run: While the candidate himself stands in front, saying something that will be torn apart by the media for even a whiff of incoherence, his surrogates are the ones doing the hard work of (in this case literally) putting themselves on the line to buttress Biden's campaign in the face of an increasingly rowdy electorate.

If nothing else, though, it made for some fun Twitter talk. And these days, for better or worse, that's what politics seems to be all about.