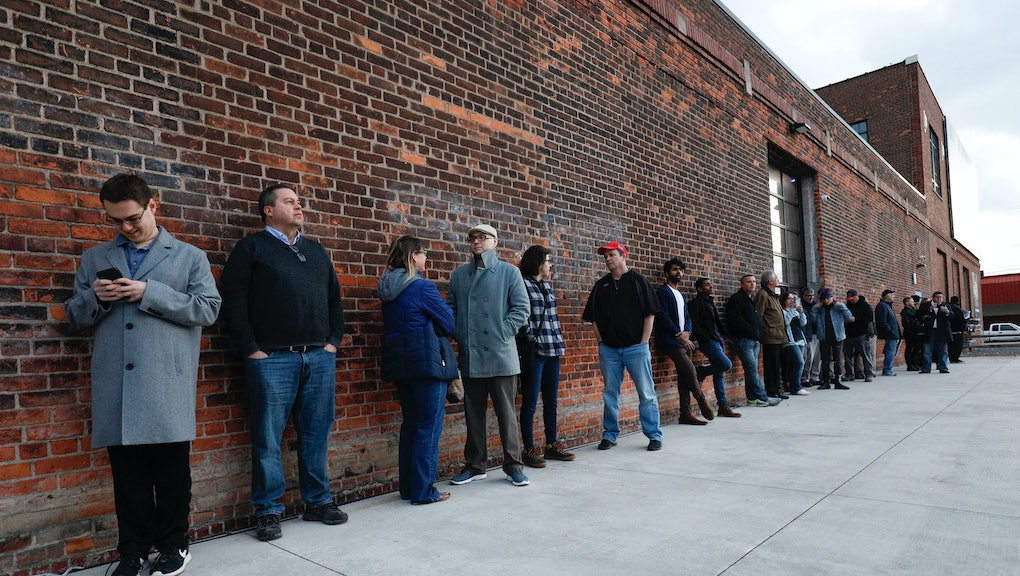 Super Tuesday has come and gone, and with its passing we have now entered a new phase of the Democratic presidential primary. At this point, what once was an absurdly overcrowded field of candidates has been whittled down to essentially become a two-man race between Vermont Sen. Bernie Sanders, who swept a host of Western states this week, and former Vice President Joe Biden, whose once moribund campaign rose from the brink of death to claim decisive victories across the South.

But beyond the horse-race analysis of which candidate stands where among which demographic, Super Tuesday called into stark relief a more fundamental — and fundamentally troubling — aspect of our election system: the difficulties many voters face simply for trying to cast a ballot. In both California and Texas, Tuesday's two largest delegate caches, voters reported agonizingly long waits at polling stations, with some people waiting anywhere from one hour to three or even four hours in line before they could enter the voting booth.

"Those people that are in line around the corner are probably going to be there for three hours — if they wait," Los Angeles voter Omar Noureldin told the Los Angeles Times.

On Twitter, reactions ranged from impressed to disgruntled, as high turnout resulted in extended wait times for prospective voters in line at their respective polling places.

In Texas, some waited hours past the state's 7 p.m. poll closing time before they could cast their ballots. At Texas Southern University, voter Hervis Rogers left his polling station at 1:30 a.m., telling the Houston Chronicle that his post-voting plan was to "give in and go to work."

"I'm supposed to be there now,” he added.

In Houston, hospital worker Mackenzie Maupin told The Texas Tribune that she waited nearly four hours after getting in line before she was able to vote — at 10:10 p.m, with an estimated 75 people still waiting to vote after her.

"It just kept going and going all around the building,” Maupin said. “I’ve never seen lines like this."

Excessive waiting to vote is not simply an inconvenience, it's an overt barrier to participating in American politics — one that disproportionately effects minority communities and poorer neighborhoods. And that's partially by design, thanks to Republican efforts to reduce early voting opportunities and limit polling locations.

Tommy Buser-Clancy, a senior staff attorney for the American Civil Liberties Union of Texas, told Mic in an email that "long wait times are a predictable consequence of closing polling locations, late opening locations, and not having enough working machines at each location. This results in voter suppression."

The effect is undeniable: University of Pennsylvania researcher and NBC elections analyst Stephen Pettigrew has shown a link between longer wait times and diminished interest in voting in future elections. Charles Stewart III, a political scientist at the Massachusetts Institute of Technology, similarly concluded that those who wait in long lines tend to doubt whether their votes will be tabulated accurately. Combined, we see a system in which certain demographics are disproportionately led to have eroding faith in the electoral process — to the advantage of those in power, and at the expense of those who are not.

While there are some proposed remedies to this systemic issue — changing Election Day to a weekend, or making it a national holiday — the likelihood of their counterbalancing the long-term effect of this form of voter disenfranchisement is questionable, given the number of people who would still be required to work. Rather, what seems necessary is an expansion of voting rights legislation that would assure equity in the process across demographics and geographies. But to make that happen, those hoping to expand those rights have to win elections first.

This article was originally published on March 4, 2020