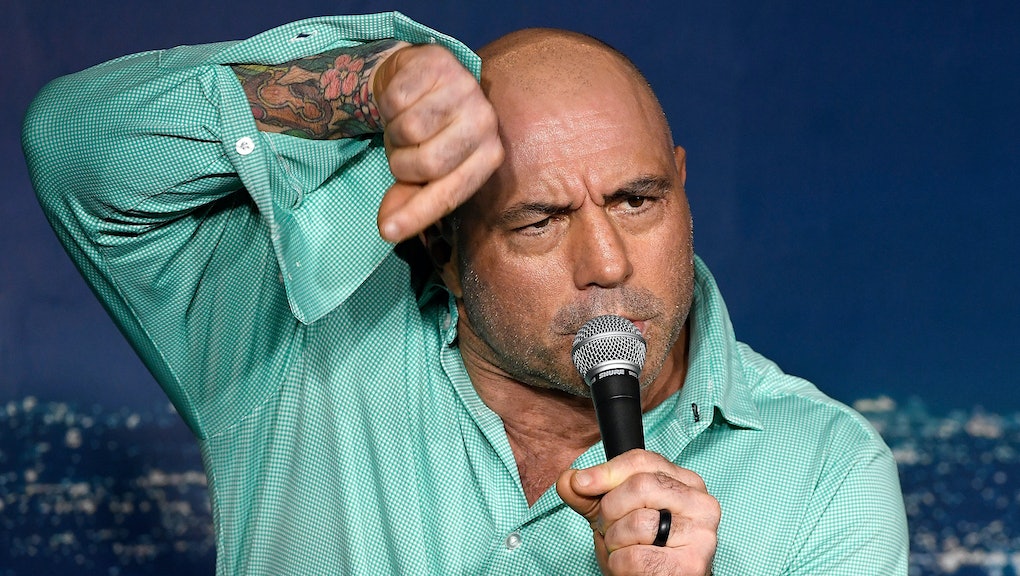 On Wednesday, comic and podcast megastar Joe Rogan revealed that he had recently contracted COVID-19. On a short Instagram video, Rogan described his early symptoms and his apparently quick recovery — after having tried an armful of medicines to "cure" himself. “We immediately threw the kitchen sink at it,” he said. “All kinds of meds. Monoclonal antibodies, ivermectin, z-pak, prednisone, everything. And I also got an NAD drip and a vitamin drip, and I did that three days in a row.” The real “bad news” of it all, he added, was that his upcoming show in Nashville would need to be postponed.

Absent from the video was any mention of the vaccine, of which Rogan has been publicly skeptical of, or about the deadliness of COVID as it surges across places like Florida, where he was touring and likely contracted the disease. In fact, he largely emphasized the opposite. “I really only had one bad day,” Rogan practically shrugged in the video. Over the last few months, the comic, whose podcast regularly draws millions of listeners every episode, has suggested young listeners not take the vaccine (leading to a public censure from the White House), railed against proof of vaccination, and opposed vaccination requirements at his own shows. In a recent August episode of his podcast, Rogan falsely claimed that the vaccine amounted to “gene therapy.”

Of course, Rogan’s omission of anything vaccinate-related here isn’t on its face an endorsement of anti-vax or anti-mask ideologies. He has explicitly claimed to not be an anti-vaxxer. But to Rogan’s fan base, who have listened to him nevertheless express wariness about the vaccine, a certain implication can be read in between the lines — that COVID was mostly manageable even for someone who may well be unvaccinated, and that it was certainly worth it to live his life with freedom up until this point. A quick trip to the comments of his video on Instagram is evidence enough of this read from his fan base.

Rather deviously, the only firm stance that Rogan appeared to take was articulated in a way that plays to both sides while absolving himself of guilt: “A wonderful, heartfelt thank you to modern medicine for pulling me out of this so quickly and easily,” he says to conclude his video. It would seem that Rogan is forming an implicit defense from any claim that he is anti-science or against public health, while at the same time indicating that COVID is something one can move through “quickly and easily.”

The avoidance of any mention of the vaccine is all the more glaring when the modern medicine he does reference includes false “cures” like ivermectin, a drug for horse parasites that the FDA expressly condemned amid a surge in calls to poison control centers over its usage. The tragic irony, of course, is that while folks like Rogan repeat, whether directly or indirectly, baseless paranoia about the vaccine and the supposed dangers of injecting something into one’s body, the comedian is more than happy to ingest legitimately dangerous drugs and endorse them for his tens of millions of listeners. “I’m not a doctor,” Rogan said on his podcast in defense of his dubious vaccine take this past spring. “I’m a fucking moron.” Unfortunately, his listeners might not agree.

More like this
The plant-derived COVID vaccines of the future won't need refrigeration — and that's huge
By Melissa Pandika
Jeff Bezos is too rich for one lifetime, so he's trying to live forever
By Joseph Lamour
Biden's new office to fight for environmental justice already faces an uphill battle
By AJ Dellinger
Stay up to date