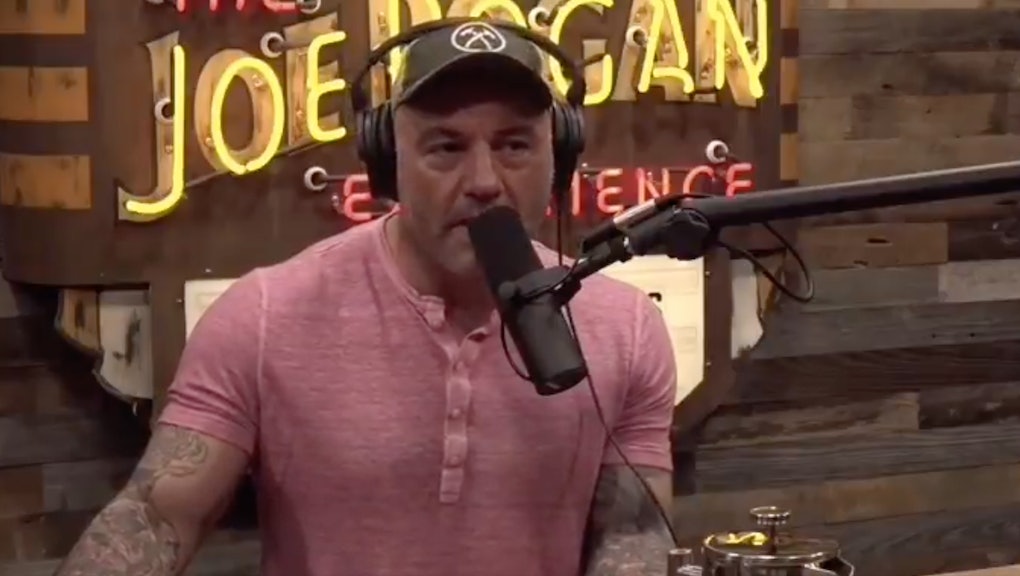 Update 4/28: Dr. Fauci has weighed in on the Rogan saga, reminding everyone that people without symptoms can still spread coronavirus, thereby extending the pandemic and making life worse and more miserable for everyone else. "So if you want to only worry about yourself and not society," Fauci said, "then that’s OK.”

Medical professionals have been clear about this: 70% to 90% of Americans need to be fully vaccinated against COVID-19 to reach herd immunity so we can return to living life somewhat normally. The just-under 30% of us who've dutifully gotten our shots and waited patiently for our immune systems to power up are now eagerly awaiting the "hot vax summer" we've been promised. But one non-doctor is threatening all the safe cavorting that's so close we can almost taste it. Joe Rogan, arguably the most influential podcaster in America, used his platform to tell healthy young people not to get vaccinated.

Rogan — who seemingly hasn't been vaxxed himself, so steer clear — said he thinks vulnerable people, like his parents, ought to get the shot. "But if you're like 21 years old, and you say to me, should I get vaccinated? I'll go no," he opined. "Are you healthy? Are you a healthy person? [...] If you're a healthy person, and you're exercising all the time, and you're young, and you’re eating well, like, I don't think you need to worry about this."

Rogan clearly isn't paying attention to what's going on in India and other places where the virus has been allowed to circulate and mutate into strains that are more difficult to fight. What's seriously upsetting, though, is that folks who've been distrustful of science and the rapid development of COVID-19 vaccines may listen to Rogan over the advice of medical professionals. The Joe Rogan Experience is the most popular podcast on Spotify, where it's exclusively broadcasted. The average age of his listeners is 24 and 71% are men. There's bound to be overlap between his audience and the 49% of Republican men who said they wouldn't get the vaccine when it was available to them.

Rogan has a track record of using his podcast to spread conspiracy theories, spread COVID-19 misinformation, and attack transgender people. Also, he's not the only right-wing figure to espouse bad takes about the pandemic in recent days. The CDC just relaxed its mask guidelines, announcing they are no longer necessary outside. But Tucker Carlson encouraged his viewers to actively harass those who choose to continue wearing them outdoors. Over on the website American Greatness, Peter D’Abrosca straight-up wrote that he won't get the vaccine because it makes liberals mad.

It's all beyond petty and inane. Trolls like Rogan, Carlson and their kind feed on liberal outrage, of course, but I'm furious that they're so eager to perpetuate a pandemic by fueling arguments that shouldn't be divisive in the first place. A brutal virus has infected 147.5 million people worldwide and killed more than 3 million of us to date. Scientists worked tirelessly to find a treatment, and they succeeded in record time. But largely due to partisan bickering, tons of people are like, "Nah, we're good." It just doesn't make sense.

More like this
Cara Delevingne minting her vagina as an NFT is peak 2021
By Kara Weisenstein
Elon Musk's first foray into comedy was a strange, satirical website called Thud
By Amanda Silberling
Surging condom sales prove that a summer of hot, safe sex awaits us
By Tracey Anne Duncan
Stay up to date