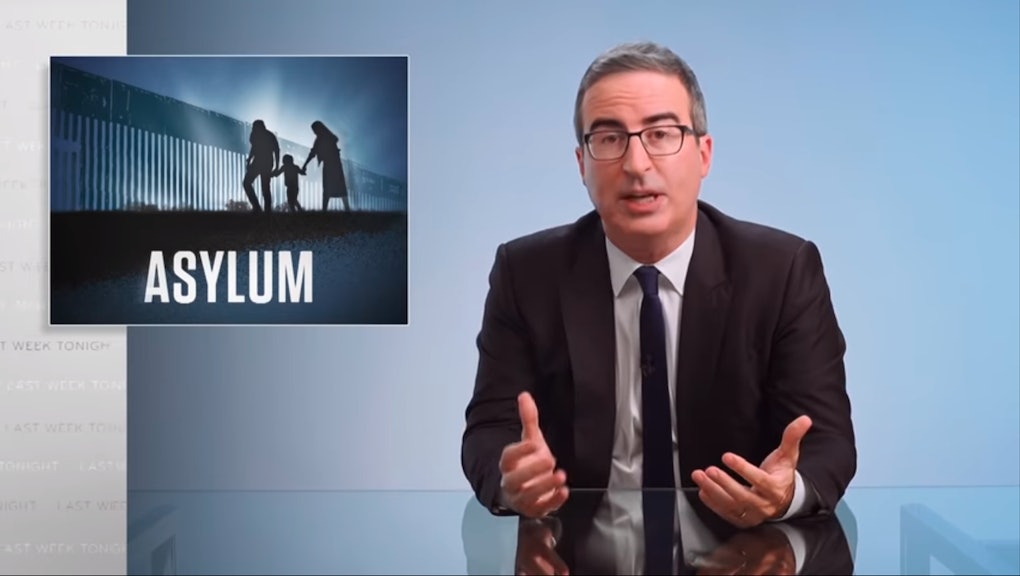 In one of his final Last Week Tonight episodes before the election, John Oliver shifted his focus to President Trump’s relentless attacks on asylum seekers. While he’s dedicated a number of segments to Trump’s immigration policy, from family separation to the border wall, Oliver zoomed-in on an often misunderstood element of the immigrant experience.

After unpacking the still-raucous final debate and Rudy Giuliani’s eventful week on both ends of scandalous news cycles, Oliver tackled President Trump’s systematic and effective cruelty toward migrants seeking asylum. This is by design and in many ways always has been, but Oliver says this administration has made it “absolute hell” through new policy initiatives. “Their policy of family separation caused widespread outrage, but they have done so much more than that,” Oliver said.

He contrasts a clip of Trump demonizing asylum seekers as scary, face-tattooed threats to society, with the Schoolhouse Rock melting pot, “huddled masses yearning to breathe free” messaging. Oliver also shares the story of a Honduran immigrant featured on the Netflix documentary series Immigration Nation. Berta sought asylum with her 12-year-old granddaughter, who gang members attempted to coerce into marrying, but when they arrived in the U.S., Berta was separated from her granddaughter and detained for 17 months.

The asylum-seeking process was already an immensely challenging one, with endless red tape and less than a 50 percent chance of being granted entry. But Oliver notes that the current administration has weaponized Title 42, a public health measure that isn't related to immigration law, as a means to restrict migration. Oliver details how, while this was weaponized before the pandemic, the guise of public health concern has made life a living nightmare for minors seeking legal attention:

“The government has gone out of its way to avoid scrutiny here. For example, unaccompanied minors are usually kept in shelters where immigration attorneys can find them and try and help them but by citing public health concerns, the government has instead been quietly keeping kids in hotels supervised by private contractors...this administration has effectively taken an asylum system which was already imperfect and shattered it."

Biden, who served as Vice President during a time of record deportations, is not a candidate to hold much optimism for broad, overwhelming immigration reform. But Oliver hopes that even an unenthusiastic vote for Biden is enough to turn back some of the administration’s cruelest immigration policymaking and slow the bleeding. “Obviously, Biden will have to do a lot more, and we will have to hold him to the promises he’s made,” Oliver said. “But we can’t begin to fix the damage done by this administration until we replace the administration itself.”

More like this
Ellie Kemper apologizes for attending “racist, sexist, elitist” Veiled Prophet Ball
By Tim Brinkhof
Katt Williams to all comedians: If cancel culture gets to you, you weren't funny anyway
By Tim Brinkhof
The all-Black Bill Pickett Invitational Rodeo will air on national TV for the first time ever this Juneteenth
By Jewel Wicker
Stay up to date