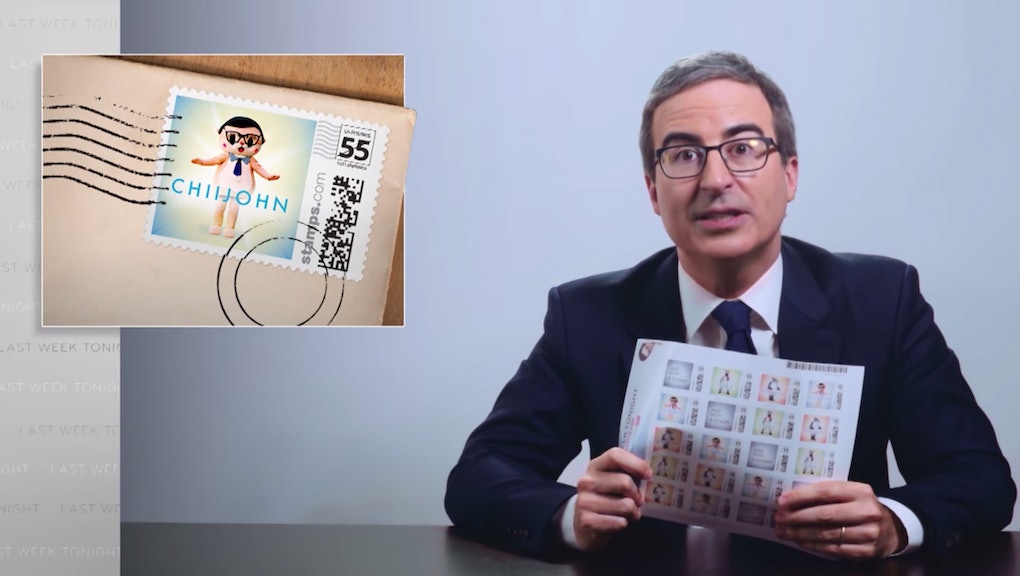 On Sunday’s Last Week Tonight, John Oliver took a break from coronavirus coverage to focus on the US postal service, which is in dire straits. The agency has financially hobbled along for years now. The last time the USPS turned a profit was in 2006, but it has reported multi-billion dollar losses every year since.

The coronavirus pandemic has exacerbated the postal service’s problems. Lots of companies have ceased advertising through the mail, and as a result, postal volume has significantly decreased. US Rep. Gerry Connolly (D-Va.) who chairs the House Subcommittee on Government Operations told NPR the decline in mail could hit 60% by the end of the year, which he called “catastrophic” for the postal service.

As Oliver pointed out on his show Sunday night, most of the USPS’s current woes can be traced back to the Postal Accountability and Enhancement Act, passed by Congress in 2006. The law dictated the USPS had to prepay health care benefits for retirees on a 50-year schedule, beginning with an “aggressive obligation” of setting aside $5 billion a year for the first 10 years. It also put price caps on first-class mail, curtailing the agency’s ability to turn a profit. The 2006 law impacted the postal service’s bottom line in a dramatic way. In just one year, the USPS went from turning a $900 million surplus in 2006 to a $5.1 billion loss in 2007.

Losing the postal service in the middle of a pandemic would be a catastrophe for lots of reasons — but that’s exactly what could happen if nobody bails the agency out. "Without financial help, the USPS may not make it past September without significant service interruptions, which is upsetting, especially during an election year, a census year and a pandemic that has people housebound," Oliver said on Last Week Tonight.

The USPS was deemed an “essential service” at the outbreak of the pandemic for good reason. "Just think about: In this pandemic, information is going into people's homes on health. Medicines are going into people's homes through the post office," Mark Dimondstein, president of the 200,000-member American Postal Workers Union, told NPR. "Even in ordinary times, there's 1.2 billion packages of medicine," and "just about all" of the VA's medicines are delivered by the USPS, he added. Meanwhile, postal workers fear for their health amid a lack of personal protective equipment (PPE) and supervisors who don’t seem to care about their safety.

The government seems nonplussed by the probable demise of the post office, however, and as Oliver opined, it’s probably because the president is holding a grudge. "Trump is strongly opposed to giving the USPS sufficient aid, and many believe it's because of its relationship with Amazon, which is owned by Jeff Bezos, who also owns the Washington Post, whose political coverage is hated by the president, who, as we know, makes policy decisions based on his never-ending game of 'Six Degrees of How Is This About Me?'" the comedian quipped.

Oliver is known for pulling statement-making stunts. Remember his 2018 children’s book, A Day in the Life of Marlon Bundo, meant to skewer Vice President Mike Pence for his anti-LGBTQ+ politics? It became a bestseller, with proceeds going to The Trevor Project and AIDS United.

Since stamp sales are still a key revenue generator for the USPS, Oliver announced his show partnered with Stamps.com to design Last Week Tonight stamps, the sale of which benefits the post office. "The assortment includes images of a free-spirited otter mascot named Chiijohn, a giant squirrel named Mr. Nutterbutter, a zebra mascot who directs traffic in Bolivia and a stamp that says 'AND NOW...A STAMP' to remind you that the stamp is — and this is true — a stamp," the Stamps.com listing reads.

Oliver isn't the only late night comedy host to recently call attention to the post office's plight. When President Trump called the USPS "a joke" a few weeks back, Samantha Bee dedicated an episode of Full Frontal to the agency. She urged viewers to support the post office by buying stamps and even gave away custom stamps with her face on them to lucky fans. "The Postal Service is hot as hell. The workers wear knee shorts, they give it to us in the rain, sleet or snow, and they're the only federal agency built entirely on the principle of licking stuff," Bee joked.

More like this
'Exterminate All the Brutes' is a messy, ambitious documentary that ties together genocide, white supremacy, colonialism ... and Josh Hartnett?
By Nicholas Russell
You can feel for Khloé Kardashian and also recognize she's part of the problem
By Kara Weisenstein
Nobody is more qualified to host 'Jeopardy!' than LeVar Burton
By Kara Weisenstein
Stay up to date