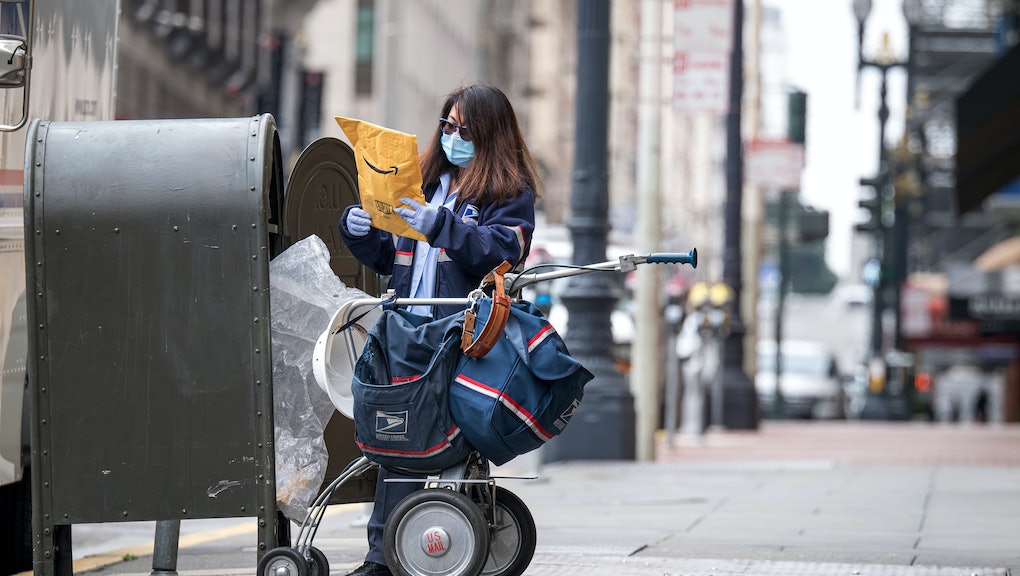 Grocery store clerks, nurses, farmers, and doctors are all considered front-line workers — those who are putting their bodies in harm’s way to ensure public safety and keep America fed and healthy while the coronavirus outbreak rages on. But what about the workers of the U.S. Postal Service, who are delivering mail that, these days, includes absentee ballots and eventually, stimulus checks from the federal government? Without an influx of federal funds, the USPS says that its operations could be jeopardized — and potentially lost altogether by the summer.

So far, mail delivery service has continued uninterrupted during the pandemic. But mail volume is down by a third compared to this time last year, and The New York Times reported that the USPS fears a loss this year alone of $13 billion, thanks to the effects of coronavirus. Over the next decade, the service apparently expects to lose another $54 billion in revenue. The numbers are a stark reminder that coronavirus has not created, but rather worsened a crisis within the Postal Service, which has for years now struggled to turn a profit, due in part to a congressional mandate that requires it to pre-fund workers' retirement accounts.

People and businesses are sending less mail and shipping fewer packages, and even though deliveries have increased as people stay home it's not enough. If the downturn in postal business continues, profit from stamps and other mail services could be down by 50% by June, per the Times. The USPS says that at this rate, the agency won't have enough revenue to last past the end of the fiscal year in September.

This week, postmaster general Megan J. Brennan told legislators on the House Oversight and Reform Committee that federal grants would help cover billions in revenue lost due to coronavirus. In a statement to the Times, she said, “At a time when America needs the Postal Service more than ever, the reason we are so needed is having a devastating effect on our business. The sudden drop in mail volumes, our most profitable revenue stream, is steep and may never fully recover.”

Brennan said that to stay in business, the USPS will require a total of nearly $100 billion in aid. The funds would help the service recover lost profit from stamps and other products, pay off existing debt, update its crumbling infrastructure, and allow for further low-interest borrowing to sustain operations.

The calls for increased funding and support come after the Postal Service was essentially left out of coronavirus aid packages, including the $2 trillion CARES Act, which Congress passed last month in order to shore up the economy. The bill notably offered hundreds of billions of dollars to corporations, banks, and the airline industry, and included aid efforts for small businesses and individuals.

But the USPS instead received $10 billion as a federal loan — not as a bailout or a grant. That means the money will just be added to the service's mounting debt, without addressing the mound of cash they're already struggling to pay back. (The Postal Service has a negative net worth of $65 billion.) The loan also seemed to some like a paltry amount given the crucial tasks the Postal Service performs: delivering billions of prescriptions every year, distributing absentee ballots, and reaching rural areas that its private competitors Amazon and UPS sometimes consider too hard to reach.

Paul Hogrogian, the president of the National Postal Mail Handlers Union called the $10 billion loan "a slap in the face." "That’s $10 billion for the backbone of the $1.4 trillion mailing industry, an industry that’s the same size and scope of the hotel and airline industries," Hogrogian said in a statement. "The Postal Service cannot become another victim of the COVID-19 virus."

According to the Times, Brennan said that the USPS was engaged in another round of talks with Treasury Secretary Steve Mnuchin. The potential downfall of USPS comes on the heels of lawmakers' calls to expand the ability to vote by mail, which leaders say is critical to ensuring public safety and democratic participation come November’s general election.

Hogrogian pushed for changes at the federal level going forward, saying that there will be more relief packages coming down the pike and the Postal Services should be included in the next one. "Our support has often been taken for granted by members of Congress from both sides of the aisle," he said in his statement. "This has got to stop."