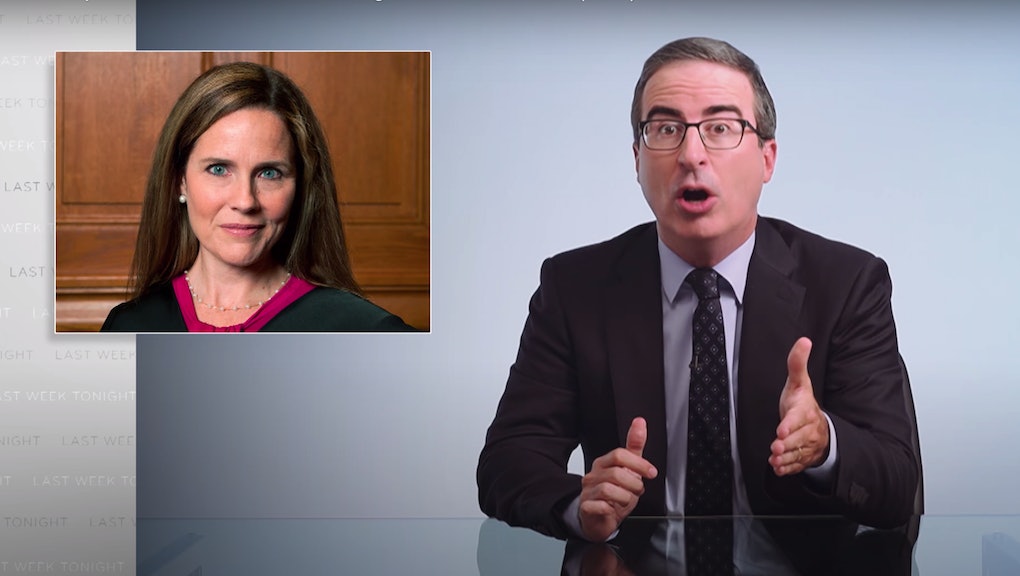 If you’re feeling nervous about the state of the nation, maybe skip the latest installment of Last Week Tonight. Returning from an Emmy Awards-induced hiatus, John Oliver addressed the passing of Ruth Bader Ginsburg and the Republican push to seat uber-conservative judge Amy Coney Barrett on the Supreme Court a month before the election. There was a notable dearth of Oliver’s normal puns and activist gimmicks on Sunday night. Instead, while outlining the many ways politicians are scheming to make American institutions less democratic, Oliver called the situation “hopeless.”

“Look, this has been a very dark week for lots of people,” Oliver said on Last Week Tonight. “The Supreme Court is about to lurch to the right for the foreseeable future, and if things seem hopeless right now, it’s because, to be completely honest, they basically are.”

One detail that Barrett didn’t disclose when Trump nominated her to be a federal judge in Chicago in 2017 is that she belongs to a fringe religious sect called People of Praise, which considers women second-class citizens to men. Members swear a lifelong loyalty oath, called a covenant, and are assigned a spiritual, moral, and personal advisor called a “head” for men and, until recently, a “handmaid” for women. The connotations are chilling when you consider the threat Barrett’s nomination poses to abortion rights and gender equality in this country.

“Trump is about to replace a liberal icon with an extremely conservative justice who’s been called the female Antonin Scalia, and she can serve for a long time,” Oliver explained. “Amy Coney Barrett is only 48, and I know that I make 43 look like 76, but trust me, that is young for a Supreme Court justice.”

Oliver also pointed out why Trump is so eager to confirm Barrett before November: if he doesn’t win and refuses to concede, the Supreme Court decides the outcome of the election. And a conservative majority is a lot more likely to install Trump in the White House for four more years — regardless of the will of the people.

That’s the really frightening thing about the latest Last Week Tonight — Oliver says Democrats’ best bet to protect democracy is by winning the presidency and both chambers of Congress by a landslide, then enacting sweeping electoral reform that makes it impossible for someone like Trump to steal an election in the future. That plan requires a whole lot of difficult contingencies, though. That’s why it’s really hard not to join Oliver in his malaise, since everything does feel pretty “hopeless” right now. Literally the least we can do is make sure we all vote on or before November 3.

More like this
This restaurant's viral anti-vax stance is a sad, predictable sign of our culture wars
By Brandon Yu
Dua Lipa has officially distanced herself from DaBaby
By Kara Weisenstein
A #MeToo’d Ryan Adams made his bed and now seems pretty uncomfortable in it
By Chloe Stillwell
Stay up to date