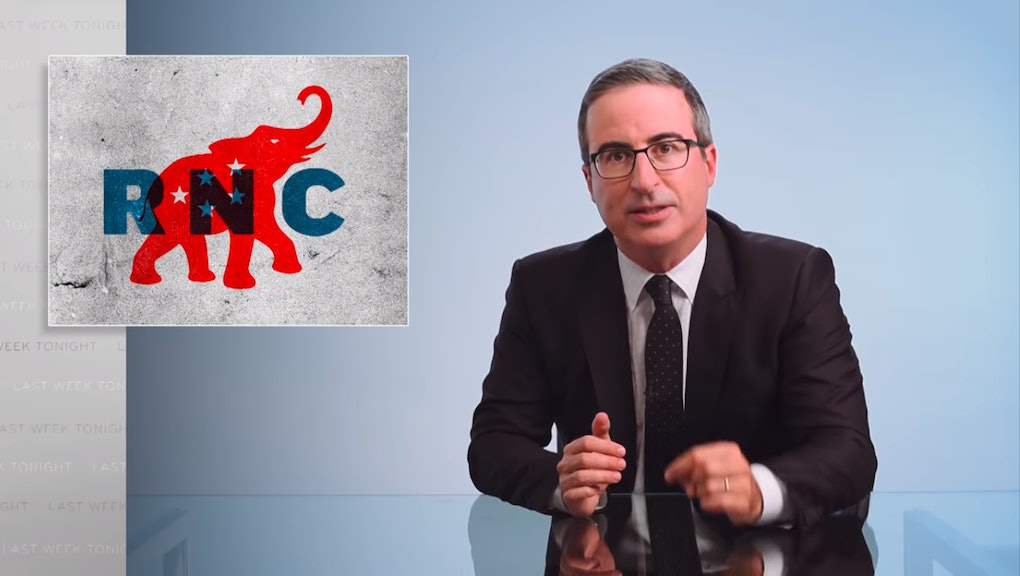 Last Week Tonight doesn’t often cover the events of the previous week, but the police shooting of Jacob Blake, riots, vigilante homicide, and the Republican National Convention didn’t leave the show much choice. “It’s one of the rare times we’re actually living up to our show’s title, unlike what should probably be called 28 Minutes on the Corn Tax or Whatever the Fuck with John Oliver,” John Oliver says at the top of the episode. On Sunday night’s installment, Oliver connected the RNC’s rhetoric to far-right militia violence in Kenosha.

He begins with a summary of events at the RNC, which both maintained that America isn’t a racist country and featured the couple who aimed guns at Black Lives Matter protesters in St. Louis. Oliver zeroed in on a moment in Vice President Mike Pence’s address, which implied that his audience and administration are separate from Black Americans. “We don’t have to choose between supporting law enforcement and standing with our African-American neighbors,” Pence said. Oliver wants to know, who is the “we” here, exactly:

“It seems like you’re making a distinction between ‘we, the American people’ and ‘our African-American neighbors,’ who I guess are, by extension, are somehow a different group entirely. But I guess that sentiment shouldn’t be surprising coming from Mike Pence, a man who permanently looks like he should be living in Ken’s White Flight Dream House.”

The RNC perhaps reached maximum depravity when Mark and Patricia McCloskey, the attorneys charged with felony unlawful use of a weapon after pointing guns at protesters, appeared in a pre-recorded video. The couple spread the baseless, racist conspiracies that Black Lives Matter protesters want to abolish the suburbs, and drummed up fear over low-income housing. While this seemed especially grotesque on a national scale, Oliver pointed out how similar this was to Trump rhetoric:

“I don’t know if [Rittenhouse] saw the McCloskeys speak the night before he drove to a city he didn’t live in to defend property he didn’t own. What I do know is he was an avid Trump supporter, even sitting front row at a rally back in January, and Trump and his media ecosystem have been delivering essentially the same message as the McCloskeys for years now.”

With his focus shifted to Kyle Rittenhouse, the 17-year-old militia member who killed two protesters and injured a third in Kenosha, Oliver identified an obvious difference between how Kenosha police directed their violence. Rittenhouse, who became an incredibly terrifying folk hero for conservative media and the far-right, was allowed to walk right past police without incident after his killing, whie Blake was shot seven times in the back in front of his kids. “If you’re looking for a better visual illustration of the differences between being black and white in America, I don’t think you’re gonna find one,” Oliver said. “Except, maybe, seeing exactly who sits down and who stands up when ‘Cotton Eye Joe’ comes on at a wedding.”

By the end, Oliver surveys the thrilling wave of NBA and pro sports strikes, but details the limits of heightened voting access and reliance on old systems against violent fascistic forces. He also lays bare the implausibility of Joe Biden functioning as a radical proponent of rioting and unrest, rather than a president who would have to be nudged significantly for any semblance of progressive gains.

More like this
Will ‘Impeachment: American Crime Story’ finally do the Monica Lewinsky story justice?
By Chloe Stillwell
8 shows like 'Ted Lasso' to watch if you need more feel-good TV
By Brandon Yu
Honestly just give Rihanna all the money
By Kara Weisenstein
Stay up to date