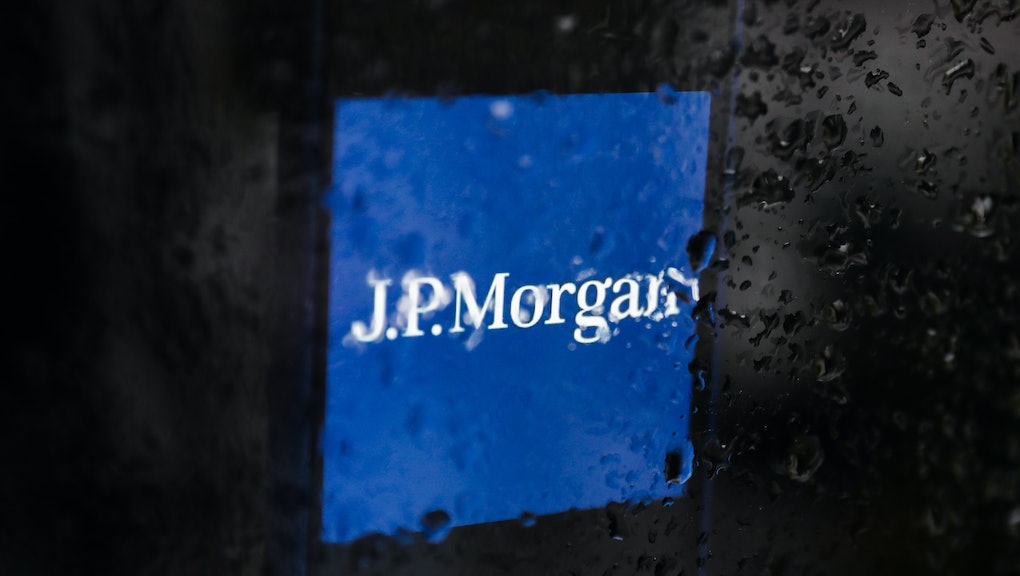 JPMorgan Chase may be saying all the right things when it comes to climate change — but behind the scenes, it seems they’re still plenty chummy with Big Oil. Last year, the largest bank in the country publicly announced its plan to consider the carbon footprint of potential future investments and work toward net-zero emissions by 2050. Privately, though, the company reportedly sought to ensure the profitability of fossil fuels (which it happens to invest heavily in), according to a new report from Mother Jones. Corporate hypocrisy: We love to see it!

Per emails obtained by environmental group Friends of the Earth and published by Mother Jones, JPMorgan execs seemingly pitched members of the Trump Administration’s Treasury Department on potential government bailouts of oil and gas firms. The emails began shortly after the passage of the first coronavirus relief package, known as the CARES Act, which provided aid for businesses struggling during the pandemic. As Mother Jones notes, the bill granted Trump-appointed Treasury Secretary Steven Mnuchin the ability to tweak lending terms as he saw fit for many industries — and it looks like JPMorgan saw an opportunity to keep some of its struggling fossil fuel investments afloat. As the pandemic brought the world to a halt, demand for oil slowed and prices dropped so low that several firms declared bankruptcy and companies were actually paying buyers to take barrels off their hands.

"Numerous banks, largely scattered across the South, have meaningful direct exposure to oil and gas," Travis Machen, JPMorgan head of Financial Institutions Corporate Client Banking wrote in one email, noting fossil fuel investments account for up to 11% of some banks’ total loans. If those fossil fuel companies fail, the banks backing them would suffer as well, putting the entire economy at risk. In order to avoid disaster, Machen reportedly recommended government intervention, including "additional direct government support to the energy sector (similar to programs for the airline industry)" — essentially calling for a bailout of the industry. The email also suggested changing the parameters of the Main Street Lending Program, which was designed to provide funding to small- and medium-sized businesses.

In a statement to Mother Jones, JPMorgan pushed back against the suggestion that it sought to save its fossil fuel investments. “At no point did we advocate for any specific industry,” a spokesperson for the company said, while claiming that part of the email was sent in error and not intended for the Treasury deputy secretary. The intentional portion, she noted, was redacted from the emails Mother Jones viewed.

In his annual shareholder letter that just went out, JPMorgan CEO Jamie Dimon acknowledged the reality of climate change, writing that “we’re long past debating whether climate change is real,” and stating that it's “a critical issue of our time.” But he also said that addressing the matter “is not as simple as walking away from fossil fuels.” Sure, it's hard to walk away when your business is still heavily invested in the success of gas and oil investments.

“JP Morgan talks a good climate game in their public letter, but their private emails show how deeply the bank and its clients are entangled with the oil industry,” Friends of the Earth Program Manager Lukas Ross said in a statement. “Jamie Dimon’s climate platitudes in his annual letter are entirely betrayed by the blueprint emailed to Trump Treasury officials. … JP Morgan’s actions speak louder than words, and those actions are destroying the climate.”

Despite its pledge to commit itself to the goals of the Paris Climate Agreement and shift investments away from industries that contribute to the climate crisis, JPMorgan still has a considerable amount of capital wrapped up in dirty energy. According to Rainforest Action Network's annual report on banking and the fossil fuel industry, JPMorgan Chase leads the charge as “the worst,” having invested nearly $317 billion in fossil fuel companies since the Paris Climate Agreement was signed in 2015.

Of course, JPMorgan certainly isn't the only financial institution facing a bit of an identity crisis when it comes to addressing climate change. Increasingly, banks talk of ditching fossil fuel investments and going green, yet they can't seem to shake their ties to the industry that has driven profits for years. As The Guardian reported, a review by climate influence analysts for DeSmog found that 77% of board members at seven of the largest banks in the U.S. have ties to “climate-conflicted” groups, be it direct connections to oil and gas firms or relationships with trade groups that lobby against reducing emissions.

For its part, JPMorgan has taken some steps in the right direction. Last year, longtime climate change skeptic, vocal defender of fossil fuels, and former ExxonMobil CEO Lee Raymond stepped down from the company's board. And JPMorgan’s annual investments in oil and gas have been trending downward — though they still dumped $51.3 billion into fossil fuel financing in 2020. As Ross noted, it’s abundantly clear just how tied up the company is in Big Oil. Getting the bank to give up that business and the resulting profits is like trying to turn around a giant oil tanker — one that JPMorgan probably funds, too.