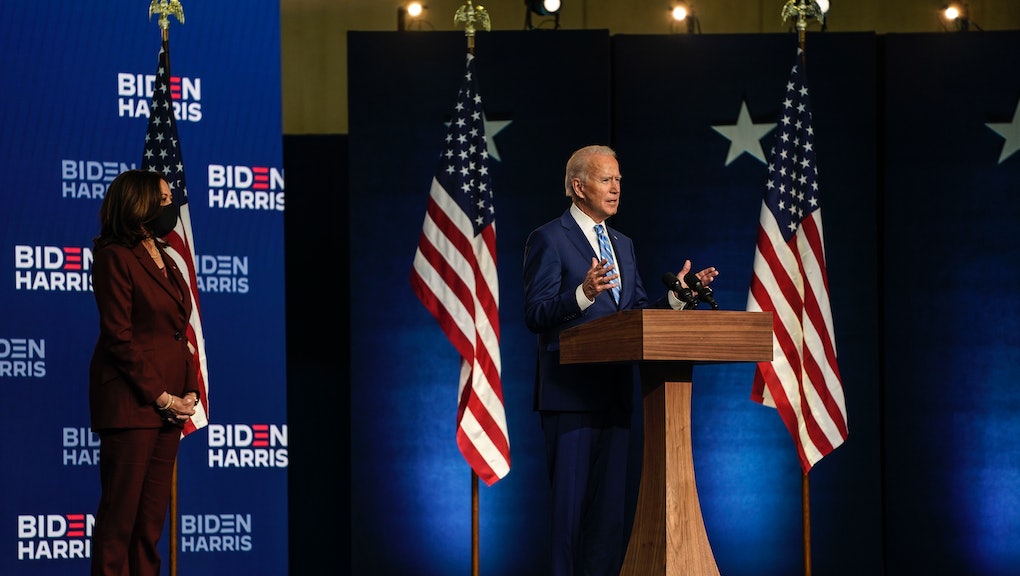 How the U.S. could rejoin the Paris Climate Agreement

Joe Biden has promised since the early days of his campaign that rejoining the Paris Climate Agreement is one of the first things he'll do if elected. He reiterated that commitment on Wednesday, and although ballots are still being counted, it seems increasingly likely that he will have a chance to make good on that pledge.

The timing of Biden's rededication to the Paris pact, and what appears to be his likely victory, could not come at a better time. On Wednesday, the United States officially withdrew from the international accord to address climate change.

Trump announced early on in his administration that he would pull out from the agreement, claiming it placed an unfair burden on the US, despite the country being the second-biggest emitter of greenhouse gases in the world. But it took more than three years for him to follow through on that threat, because the accord was written with the understanding that politics may change in countries along the way.

The Paris Climate Agreement went into effect on November 4, 2016 and required any country that signed it to remain committed to the agreement for at least three years, and required a full year of advance notification after that three-year period expired before a country could actually withdraw its commitment. Conveniently, that resulted in the United States remaining a part of the Paris Climate Agreement for the vast majority of the Trump term despite his disdain for it.

While the UN had no idea Trump was coming when the accord was written, they managed to effectively Trump-proof it, at least for one term. There will certainly be some damage done by the US absence, even just for a few months. The country will not be able to join events for participating nations, including a planned event for the fifth anniversary of the agreement scheduled for this December.

So if Biden does in fact take the oath of office on January 20, 2021, will he really be able to get the United State back into the Paris Climate Agreement that day? Not quite. But he can start the country down the path to rejoining, and it's a considerably shorter one than the path to leaving.

Under the current rules of the Paris Climate Agreement, any country joining the pact has to provide one month's notice to be brought into the fold. So if Biden follows through on his promise and signals his intent to re-join the agreement on his first day in office, the United States will once again be a part of the accord by as early as February 19, 2021.

There might be some contention in regards to Biden's plan to rejoin the agreement from the Congress. It is expected that Republicans will maintain control over the Senate and Democrats will have a slim majority in the House of Representatives. Back in 2015 when then-President Obama was attempting to join the Paris Climate Agreement, Republicans made a stink about needing Congress's approval in order to sign on. Their reasoning is hinged on the idea that the Paris Climate Agreement is a treaty, which require two-thirds support in the Senate. However, nothing in the accord is actually a binding measure — there is no legal obligation placed on signatories. It is meant to signal commitment to the global cause of lowering carbon emissions, but each nation gets to set its own goals and are not penalized for failing to achieve them.

On those grounds, Obama signed the agreement without consent from Congress. Many legal scholars believe that he was within his right to do this. Biden would likely cite this in re-joining the agreement, but his administration should expect a significant fight from Republicans in the Senate who once again want to litigate the president's authority on this matter.

Re-entering the Paris Climate Agreement would signal to the world that the United States is once again committed to curbing its greenhouse gas production and achieving net-zero emissions by 2050. The Trump administration managed to successfully put up hurdles that will hamper the country's capability of achieving that goal, but Biden has made climate change a top priority in his campaign. Even with Republican opposition and a divided Congress, the US should be able to rejoin the Paris Climate Agreement early on in a Biden presidency, putting us back with the rest of the world in working toward reducing carbon emissions.