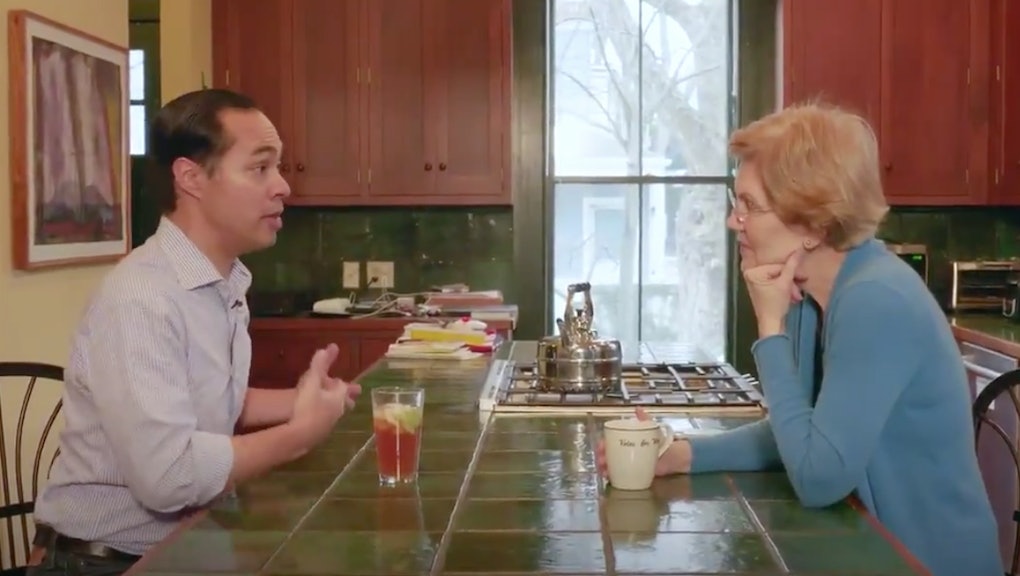 Julián Castro, the former housing secretary and most recent retiree from the 2020 Democratic primary, has already thrown his progressive might behind a former presidential rival. Castro is endorsing Elizabeth Warren, he announced Monday with a video posted to Twitter. Castro, who only suspended his own presidential campaign last week, wrote in a tweet that he and the Massachusetts senator "share a vision of America where everyone counts."

Castro's own campaign never quite gained momentum, despite his profile as an up-and-coming Democrat who worked in President Barack Obama's Cabinet. He was also the only Latinx candidate in the race and consistently drew attention to the inequities inherent in American society. His signature proposals included calling for decriminalization of border crossings, national universal pre-K, and tuition-free college.

In his announcement video, Castro is shown meeting with Warren, presumably at her home in Massachusetts. Over cups of tea — hers hot, his iced — Castro tells Warren that his campaign was built on "the idea that we want an America where everyone counts. It's the same vision that I see in you, in your campaign, in the America that you would help bring about." He also tells Warren that unlike other candidates, she is "bringing the goods" by rolling out hyper-detailed plans on various issues. "That's what you're summoning — the energy of the people," he says.

Warren responds by telling Castro that what she hears about the most from voters is "hope," invoking her signature selfie lines. "Things have been broken for a long, long time," she says, adding that "a country that elects someone like Donald Trump is a country that is already in serious trouble."

Warren has made "big, structural change" a central tenet of her candidacy. But after a late-summer surge to near the top of the national polling average, the senator has been mired in somewhat of a slump of late, while other candidates like Pete Buttigieg, the former mayor of South Bend, Indiana, have gained steam.

Winning Castro's endorsement should give a boost to her existing progressive bona fides, as well as give her campaign a major positive talking point with the Iowa caucuses just weeks away. But the move may pay dividends for Castro, too — Jezebel notes it's not hard to see his lightning-speed endorsement as a play to be Warren's second banana.

A mixed hot tea-iced tea ticket? Maybe that's the kind of diverse team that could win the Democratic primary.