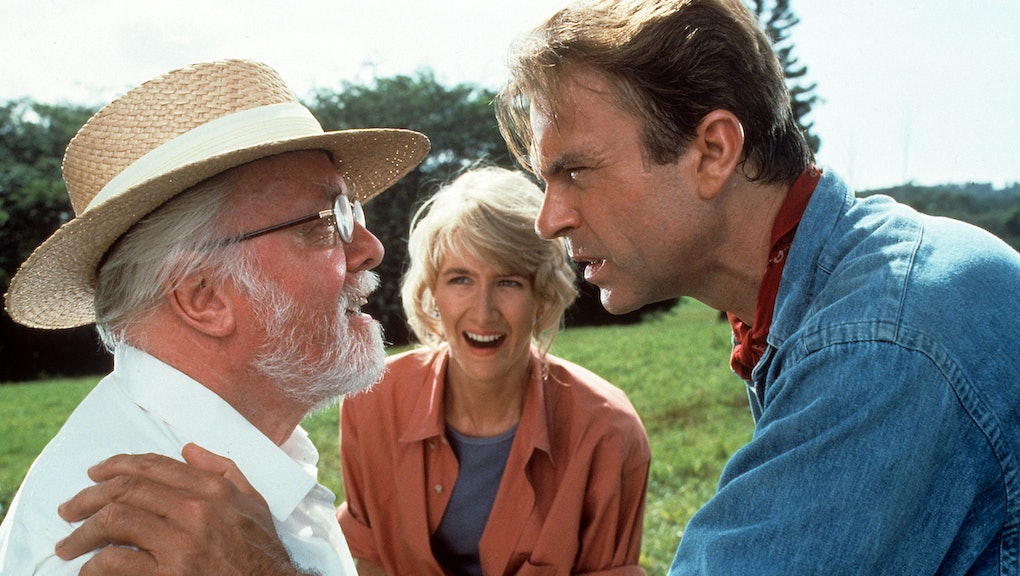 As AMC and the major studios race to get new releases back in theaters by the end of July, the most popular movies in America come beamed to us from another era. Hundreds of drive-in theaters are currently showing old flicks along with some of the year’s few major releases like The Invisible Man and Trolls: World Tour. And according to box office reports from Deadline, Steven Spielberg’s Jurassic Park and Jaws topped the charts this past weekend.

It was a historic return to the top spot for Jurassic Park, 27 years after its original release. Clocking in at $517,642 from 230 theaters. This was the longest gap between no. 1 weekends for a live-action film, according to Forbes. Spielberg’s other blockbuster, Jaws was right on its heels with $516,366 — 45 years after its release. Besides the other aforementioned 2020 releases, Spielberg was elsewhere in the top 10, clocking at no. 8 with E.T. and two films he produced, Back to the Future and The Goonies slotting in alongside newer fare.

A 27-year-old movie becoming one of the biggest movies of the summer wouldn’t be the weirdest box office story to emerge during the pandemic. With hardly any studios or filmmakers reporting data in the early days of lockdown, it opened the door for a film like Phoenix, Oregon to top Box Office Mojo for a weekend with $4,000. IFC’s The Wretched went on to become a minor hit, topping the weekend charts in May with just south of $200,000 per weekend. But by far the most amusing grift came when two filmmakers shot a short film called Unsubscribe over Zoom. Seeing an opportunity to top the charts through a loophole, they rented out every seat in a local theater showing their film, effectively pocketing their own money and topping the box office on June 10.

While classics like Jaws will entertain a stir-crazy populace and tinker with box office history until new releases can come back to theaters, it might just lay out a template for the rest of the summer. Releasing something like Tenet during the height of a pandemic seems infinitely more risky than the alternative, so this could be what we’re left with.

More like this
In 'Roadrunner,' Anthony Bourdain shows us the beauty of the mundane
By John Saward
How "Patria y Vida" went from hip-hop hit to anthem of Cuban resistance
By Kara Weisenstein
8 shows like 'Ted Lasso' to watch if you need more feel-good TV
By Brandon Yu
Stay up to date