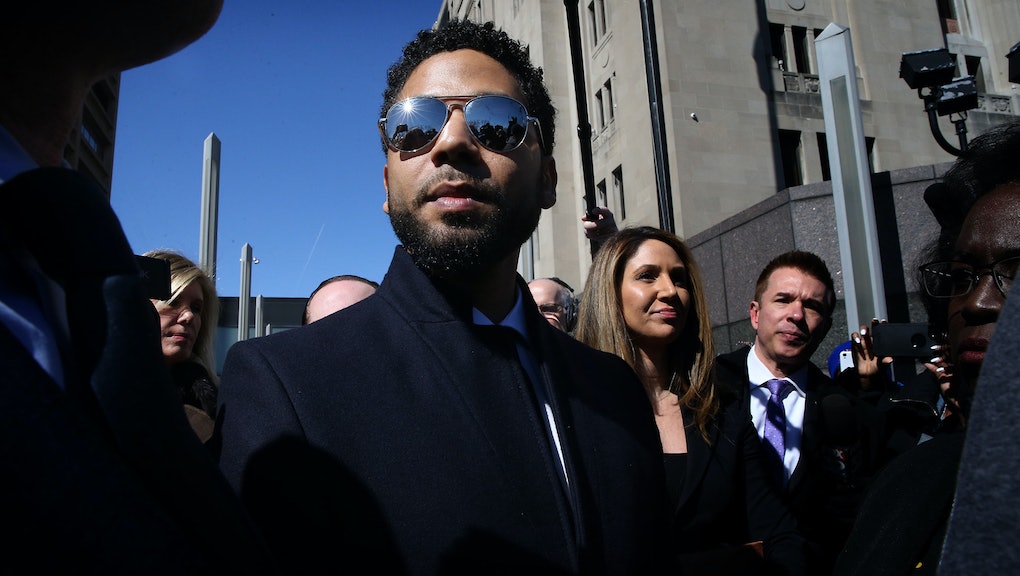 If you thought that the city of Chicago was done pursuing Jussie Smollett’s year-old case, you’d be wrong. On Tuesday, a grand jury indicted Smollett on six counts relating to the police report he filed in 2019, alleging that he had been the victim of a hate crime. It was the second time he was indicted on charges relating to the case,

Smollett was an actor on the show Empire in January 21019, when he alleged that two men wearing masks jumped him late at night and called him slurs, threw a noose around his neck, and yelled: “This is MAGA country.” After Chicago police investigated, they alleged that Smollett, working with two men from Empire, orchestrated the attack to generate publicity.

In August, a special prosecutor named Dan K. Webb was assigned to the case, after local prosecutors declined to pursue criminal charges against Smollett. In April, Chicago filed a $130,000 lawsuit against Smollett, suing for the overtime paid to police officers for working the investigation.

But the controversial nature of Smollett’s case and Webb’s appointment guaranteed that Smollett wouldn’t only incur financial damages. In a statement released from Webb’s office in August, Webb announced that he "has now completed all of its investigative steps regarding Jussie Smollett, and has made the decision to further prosecute Mr. Smollett," according to CNN.

Webb reportedly made the decision to prosecute based on “the extensive nature of Mr. Smollett's false police reports, and the resources expended by the Chicago Police Department to investigate these false reports."

That has been heavily disputed by Smollett and his team. Tina Glandian, who represents Smollett accused Webb of pursuing the case for political purposes. Glandian said that Webb "has not found any evidence of wrongdoing whatsoever related to the dismissal of the charges against Mr. Smollett. Rather, the charges were appropriately dismissed the first time because they were not supported by the evidence.”

The original prosecutor in the case, Kim Foxx, first dismissed the charges against Smollett, but when her connection to his family was revealed, she recused herself from the case, which led to the appointment of Webb. President Donald Trump has even involved himself in the case, publicly advocating for Smollett to face criminal charges.

Foxx has also alleged that the timing of the indictment is politically motivated. Foxx is seeking re-election in 34 days to remain the prosecutor. “What’s questionable here is the James Comey-like timing of that charging decision, just 35 days before an election, which can only be interpreted as the further politicization of the justice system, something voters in the era of Donald Trump should consider offensive,” Foxx’s campaign said in a statement.

Smollett is due in court on February 24.