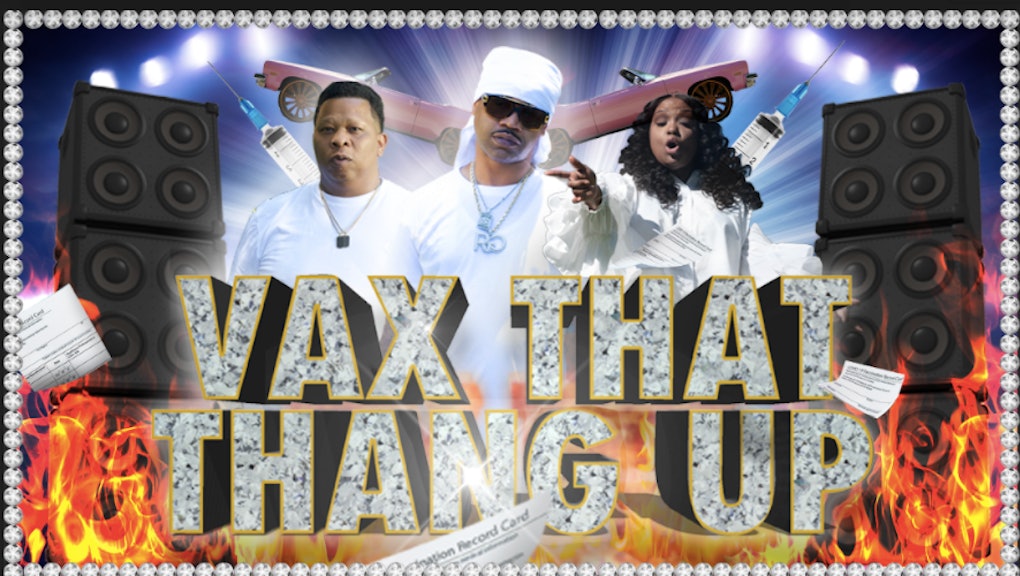 Hip-Hop may laugh at any and everything, but plenty of rappers know COVID-19 is no joke, and one of them is New Orleans MC Juvenile.

In an effort to inspire more young Black people to get vaccinated, Juvenile, producer Mannie Fresh, and rap legend Mia X teamed up with dating app BLK to remake Juvie's rump-shaking anthem "Back That Azz Up" into the educational yet still booty-centered "Vax That Thang Up."

Instead of making it rain with cash, Juvenile tosses a flurry of vaccination cards. Sexual innuendo is still present in the remake, but only encouraged after vaccination, which is some of the most responsible sex talk released on a rap song this year. Juvenile even eschews the typical toxic masculinity hip-hop champions in the name of encouraging vaccinations when he raps "you a handsome young brotha, won't you vax that thang up." Since vaccines are administered in the arm, let's just assume he's referring to that thang and not the original song's thang.

The video premiered on www.vaxthatthangup.com, where the dating app pretty much says it wants Black people to get vaccinated so they can date more. It also touts No Limit Records' first lady Mia X and Cash Money Records' founding members Juvenile and Mannie Fresh appearing in the same video, as a rare collaboration between the two southern rap monolithic labels. Lil Wayne appeared on No Limits Records founder Master P's song "All I Want" from his 2015 album Empire, from the Hood to Hollywood, but the two NOLA heavyweights never collaborated during their heydays because, as Cash Money Records co-founder Birdman admitted, the squads' two captains had a relationship. More than unite old rap foes, the vaccinated remake of one of the most gloriously raunchy rap songs was created to fix a deadly issue in the Black community.

Along with the not so subtle push for passionate connections, BLK cites U.S. Census Bureau data about Black adults under the age of 40 years old being the group of Americans most likely to be unvaccinated. Mannie Fresh himself says he did the project as a way to "educate my people" in an effort to help them continue to live. According to Center of Disease Control data, of all the Americans who have received at least one vaccine dose as of June 28, 2021, only 9% identified as Black compared to 60% who identify as white. The pain is compounded by the fact Black people are nearly three times as likely to die from COVID-19.

A major reason for Black people's hesitancy to have something injected in their arms is a mistrust of a health system that has doctors who believe Black people have thicker skin than white people, disbelieve Black women, and are significantly less likely to prescribe medication for acute pain to Black patients. There's also the mistrust of a United States government that once tricked Black bodies with the promise of free medical care into having syphilis injected in them so doctors could study the disease as part of the horrific Tuskegee Experiment. Then, there's the fact Johnson & Johnson's vaccine was distributed to largely Black communities a month before the U.S. Food and Drug Administration paused the distribution of the vaccine after it caused severe blood clotting.

Black people are more afraid of those saying they'll help than an invisible virus born to kill them. That isn't because of conspiratorial ramblings about government tracking or genocide, although you'll find plenty of Black people who don't think that's so far-fetched. It's because the reality for Black people is help usually comes with irreversible consequences that reverberate for generations. But, as bleak as the 9% rate of vaccination among Black people is, it's still up from 5.4% in February.

Only time will tell if the prospect of safely dating and the influence of hip-hop can push more Black people to vax that thang up.

More like this
Dua Lipa has officially distanced herself from DaBaby
By Kara Weisenstein
The U.S. just sold Wu-Tang Clan’s rarest album after targeting them for years
By Keith Nelson Jr.
Britney Spears is one step closer to escaping her father's control
By Kara Weisenstein
Stay up to date