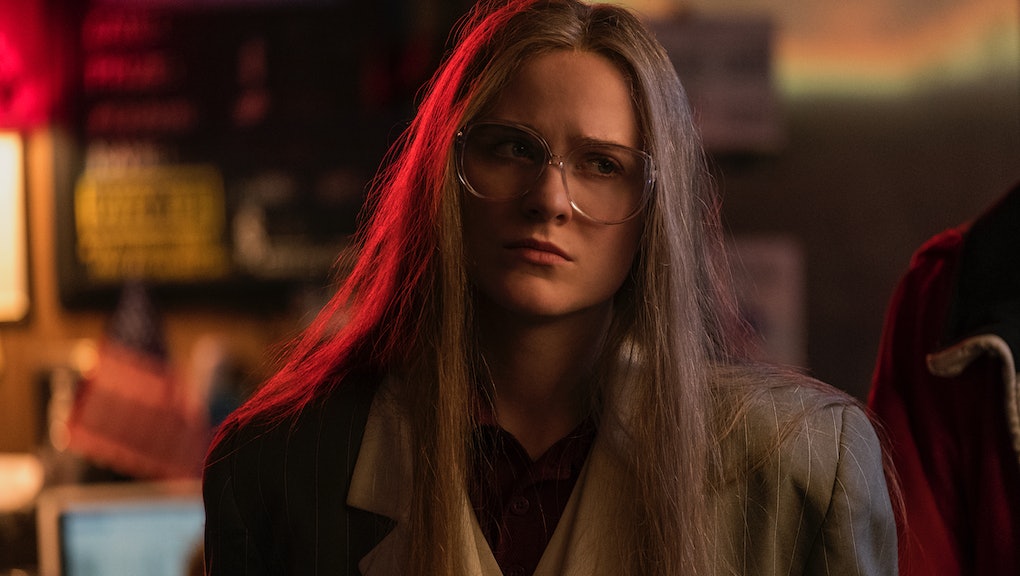 In her best-selling essay collection Trick Mirror, the writer Jia Tolentino called scamming “the quintessential American ethos,” adding that “one of the best bids a person can make for financial safety in America is to get really good at exploiting other people.” That’s precisely the concept examined and refracted in Miranda July’s striking new film Kajillionaire, a comedy about a family of grifters living by their own ethical and societal rules to flout (or perhaps exploit) the capitalist systems that govern us all. “Most people want to be ‘kajillionaires,’” the patriarch of the “scam-fam” says in the film. “That’s the dream. That’s how they get you hooked — hooked on sugar, hooked on caffeine. Me? I prefer to just skim.”

Robert and Theresa Dyne (Richard Jenkins and Debra Winger) eke out an existence in industrial Los Angeles scamming with their daughter, Old Dolio (Evan Rachel Wood). They named their only offspring after a homeless man in hopes he’d include her in his will — which that gives you a sense of what sort of caregivers they are. Old Dolio has never questioned her parents’ unconventional lifestyle, equating their inclusion of her in their schemes to familial love. “We split everything three ways. We have since I was little,” the young woman reasons when a new friend (Gina Rodriguez) presses her to explain their parent-child relationship.

Kajillionaire was both written and directed by July, who’s a prolific artist in her own right. She’s made several films (Me and You and Everyone We Know, The Future) and written a book of short stories (No One Belongs Here More Than You) and a novel (The First Bad Man). Her art has been exhibited at the Venice Biennale. Long before the isolation of quarantine, July developed an app, called Somebody, encouraging strangers to interact.

The common thread through July’s work is the desire to detangle the weird, messy intricacies of human connection. She says the idea to make a movie about a family of emotionally-stunted scam artists came to her in a dream. Waking up, July apparently whispered the idea into a voice memo titled “Family Movie.” “I was like, Ugh,” she told Vulture. “Just the saddest feeling. This is family stuff I would never willingly go toward.”

Kajillionaire isn’t always a comfortable comedy, and that kind of feels like the point. In the film, beauty and whimsy intermingles with messy emotions like shame and love. Pink foam regularly oozes from the ceiling of the dilapidated office where the Dyne family squats; it’s overflow from the soap factory situated next-door. One of the trio’s routines involves scraping bubbles from the walls with plastic trash bins, a chore of necessity to prevent rot. Through July’s lens, the drudgery becomes a whimsical, soapy ballet — that also pretty succinctly sums up the grifters’ Sisyphean quest to outsmart “the system.” It’s never totally clear who the Dynes are railing against; they seem content stealing from the elderly and innocent as well as corporate interests.

In the shadow of 2020’s gloom, last year feels like a fleeting memory. But 2019 was widely dubbed “the year of the scam,” spawning the “Operation Varsity Blues” scandal and the high-profile trial of fake heiress Anna Delvey. We were consumed by the combustion of the Fyre Festival and entranced by Theranos founder Elizabeth Holmes. (Relatedly, the deep voice Wood uses as Old Dolio has been compared to Holmes’s artificially low tone, but in a surprising twist, July told HuffPost what you hear in Kajillionaire is actually the actress’s natural voice.) Also in 2019, Hustlers glorified grifters by telling the tale of masterminding strippers who fleeced Wall Street douchebags out of their money at the height of the mid-aughts recession.

America loves to glorify swindlers, but Kajillionaire shows the decidedly un-sexy side of scam life. Long before Robert and Theresa pull their final heist of the film, it’s hard not to pity them. But more than a movie about eccentrics living on the fringe of society, July’s beautiful, heartfelt film is about the terrible interconnectedness of loneliness and love. Kajillionaire’s theme music, Bobby Vinton’s “Mr. Lonely,” is first an aural encapsulation of Old Dolio’s isolation. By the end of the film, once she’s learned to embrace her innate tenderness and eschew her toxic upbringing, the song doubles as an ironic anthem. Turns out the "family stuff" July once sought to avoid provides ample fodder for dramatic pathos.