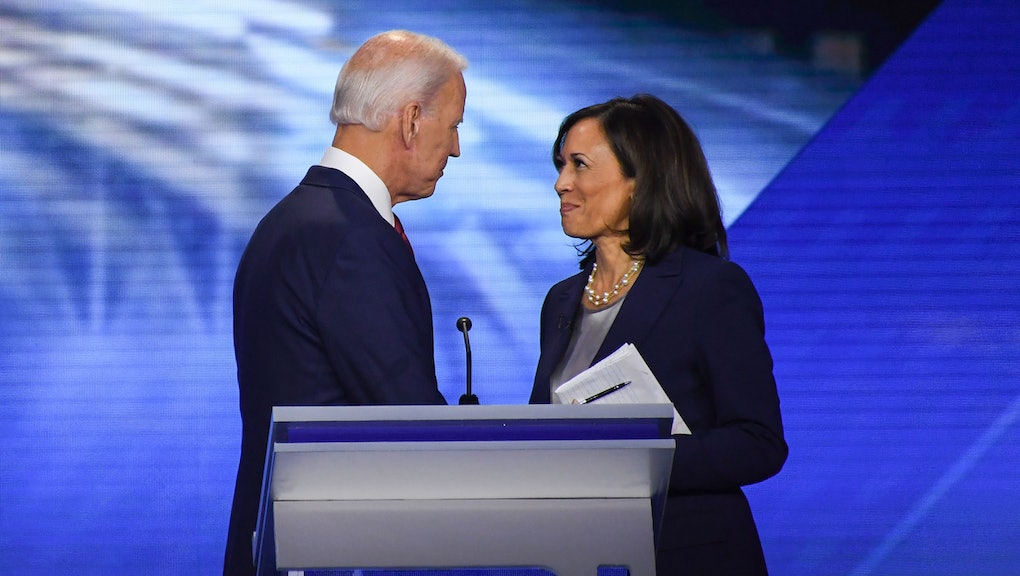 If the Democratic ticket prevails in November, Kamala Harris is set to hold an outsized role in the future of the party. Joe Biden is 77, and has at times referred to himself as a transition candidate who will usher in younger Democrats to take the reins from him. As his vice presidential pick, Harris now serves as the face of the party's future. If elected, she will likely serve as a tone-setter for Democratic policy across the board over the next four-plus years, but climate change will be among the most pressing issues.

Should Biden and Harris win, the clock will immediately start ticking on their window of opportunity to address the climate crisis. The United Nations's Intergovernmental Panel on Climate Change has said that we have until 2030 to reduce greenhouse gas emissions to 45% below 2010 levels, and until 2050 to reach net zero. Reports indicate that we are way off track to meet those goals, and the prospects for the future of the planet may already be worse than previously projected. This decade is likely the last chance to set a path for the country that will eliminate harmful greenhouse gas emissions and end America's role as one of the world's biggest carbon emitters.

While Biden heads the Democratic ticket and has laid out his own comprehensive, $2 trillion plan to address climate change, Harris has an opportunity to make climate change her fight. It is not uncommon for vice presidents to take on pet issues, and Harris could spend the next four or eight years under Biden making climate change her personal cause, pushing the country to finally get on the path to a zero-emission future.

Based on her history in elected office, she appears well suited for this cause. Tiernan Sittenfeld, senior vice president of government affairs at the League of Conservation Voters, tells Mic that Harris "has been a champion for climate and environmental justice throughout her time in public office." Sittenfeld points to her time as San Francisco’s district attorney, an office she took up in 2004. During her time there, she started the city's first environmental justice unit, which was dedicated to prosecuting polluters, particularly those who adversely affect marginalized communities. "Crimes against the environment are crimes against communities, people who are often poor and disenfranchised,” Harris said at the time.

While her history on criminal justice will almost certainly attract (justified) criticism, her record on environmental justice is considerably cleaner. When she was elected to the office of California attorney general, she took the lead on several cases aimed at big oil interests.

She used her office to oppose Chevron's attempts to open an oil refinery in Richmond, a majority Black and Hispanic city that has some of the worst air quality in the country thanks in large part to Chevron's existing operations in the area. She reached a multi-million dollar settlement with Chevron in 2011 for violating state environmental protection laws. She challenged oil company Valero when it tried to build an oil rail to transport the fossil fuel across California's coast, despite objections from cities where the train line would pass through, and helped the city of Pittsburg stop an oil terminal that oil firm WestPac had proposed building. In 2016, she filed a lawsuit against Southern California Gas Company for the company's role in the Porter Ranch gas leak that released an estimated 97,100 metric tons of methane into the atmosphere and was believed to be the worst natural gas leak in U.S. history.

Harris's record as an environmental prosecutor, however, isn't perfect. Though her office eventually secured a $120 million settlement in the Southern California Gas Company case after she had left the attorney general's office, environmentalists have argued that the decision didn't go far enough. Harris has also at times misrepresented her record. While running for president, she claimed that she sued Exxon Mobile, which her office never actually did. Harris investigated the massive oil firm, but never brought charges against it. New York's attorney general did.

As a senator, Harris continued expanding her mostly strong record on the environment. Sittenfeld points to her work to introduce the Clean School Buses Act, which called for replacing gas and diesel buses with electric ones. This year, she introduced the Climate Equity Act, a piece of legislation crafted with New York Rep. Alexandria Ocasio-Cortez (D) to address systemic environmental injustice that has affected marginalized communities. She also introduced the Environmental Justice for All Act, which had similar goals, and the Waters for Tomorrow Act, which focuses on creating a safe and secure water supply for the future. During her time in office, Harris has received a lifetime score of 91% on the League of Conservation Voters's National Environmental Scorecard, which tracks all elected officials' votes on environmental issues — though she had just a 71% approval rating in 2019.

During her presidential campaign, Harris made the climate one of her primary issues. Hannah Blatt, communications manager at the Environmental Defense Action Fund, tells Mic that she made "combating the climate crisis a top priority," and noted she "put out bold plans that lay the groundwork for our needed transition to a clean economy and called for the United States to rejoin the Paris Agreement, which would re-commit us to being a leader on the world stage on this critical issue."

Harris also pledged to decline money from oil and gas companies during her campaign, and released a comprehensive climate plan that focused largely on environmental justice and holding polluters accountable for the harm they have done to communities of color and low-income families. She pledged to create a clean energy economy by 2045 and, along the way, set goals for all buses, heavy vehicles, and vehicle fleets to achieve zero-emission status by 2030 and for all cars to be zero-emission by 2035. She also set goals for new buildings to be carbon-neutral by 2030 and to establish a carbon-neutral electric grid over the same time period. Many of her stated goals are also found in Biden's current climate plan.

There are certainly those on the political left who are not moved by Harris as a vice presidential candidate. But to those for whom the environment is a primary issue, she appears to be one of the more progressive candidates to run on the national stage. Sittenfeld says she is confident that the Biden-Harris ticket will "prioritize environmental, racial, and worker justice," and says she and her organization "could not be more excited to help elect the Biden-Harris ticket."

If she maintains the same dedication to the environment she has shown in her previous offices, Harris could be the kind of leader many environmentalists have been looking for.

This article was originally published on Aug. 12, 2020

More like this
Another reason to legalize weed: It'll be better for the environment
By AJ Dellinger
The G7 countries promised to go green, then poured money into fossil fuels instead
By AJ Dellinger
GOP Rep. Louie Gohmert has some truly appalling questions about outer space
By Rafi Schwartz
Stay up to date