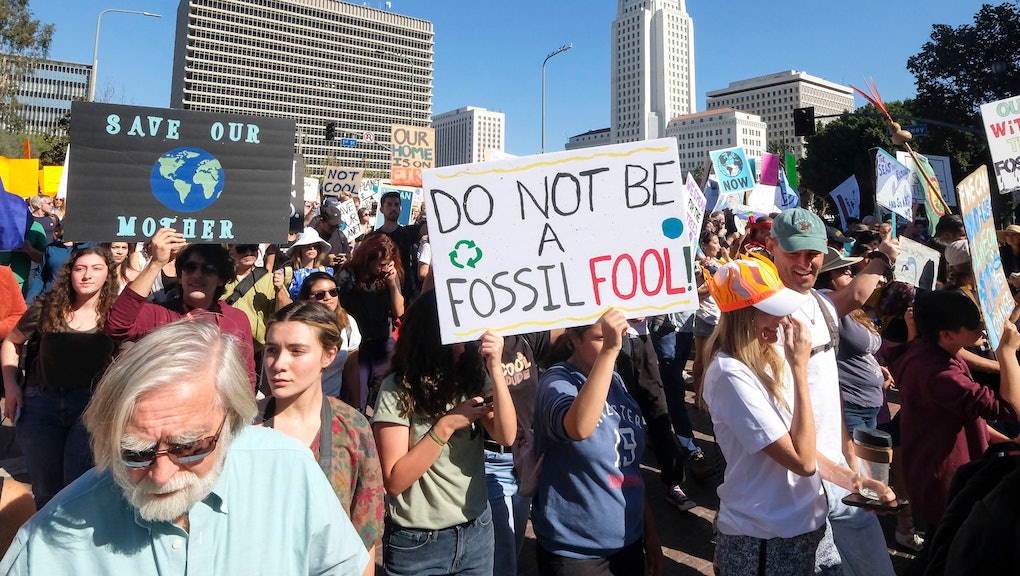 The United Nations' Intergovernmental Panel on Climate Change has warned that we need to reach net-zero carbon emissions by 2050 if we want any hope of limiting the damage done by climate change. We aren't off to a great start. A new report published by the International Energy Agency (IEA) this week found that global greenhouse gas pollution actually increased in 2018, marking the second year in a row that the world's emissions levels have gone up — and the news only gets worse from there.

According to the report, all signs point to the recent uptick in emissions being anything but a fluke. Carbon pollution increased by 1.9 percent in 2018, and the IEA projects that we won't reach peak carbon levels until 2040. The findings fall in line with other research, including Global Carbon Project's report that found emissions levels increased by 2.7 percent in 2018. Under what the organizations deems to be the most likely scenario based on global energy consumption, the world won't reach net-zero carbon emissions until at least 2070 — putting us a full 20 years late to the deadline that has been established by scientists.

The results of the IEA's report are disheartening, especially because it seemed as though the world was making progress, brief and underwhelming as it may have been. Between 2014 and 2016, carbon emissions actually began to flatten out, according to IEA data, and it seemed as though swift and unified action from world leaders might actually leave us with a fighting chance to lower our emissions and limit the effects of climate change. Now, because of economic growth in developing nations and increased demand for electricity — paired with slowed improvements when it comes to efficiency — it seems unlikely that we'll be able to stick to the timeline. According to the IEA, energy demand will continue to rise year after year by about 1.3 percent each and every year. The organization describes these increases as a "relentless upward march in energy-related emissions, as well as growing strains on almost all aspects of energy security." As demand ticks up, developments in energy efficiency have actually slowed. The IEA saw improvements in efficiency levels of just 1.2 percent — half the average rate of improvement seen in 2010. The organization credits this slow down to "a relatively lack of new energy efficiency policies and of efforts to tighten existing measures." In other words, governments simply aren't doing enough to encourage and adopt more energy-efficient alternatives and appear to be content with allowing emissions levels to rise because it is typically cheaper to rely on old, dirty fuel sources.

That approach just isn't going to cut it if we have any hope of stopping the global temperature from rising significantly. Deadlines for showing improvement when it comes to emissions levels are already starting to pass us by. In 2013, the United Nations Environment Programme warned that we would have to "significantly" cut carbon emissions by 2020 in order to put ourselves on track to keep the global temperature increase under two degrees Celsius, and warned that failing to lower our emissions levels in that timeframe would "exacerbate mitigation challenges." It looks like we'll be facing those challenges head on due to inaction, or at best insufficient action — and it's just going to make every goal from here on out tougher to reach. When the UN issued its report suggesting that we need to reach net-zero emissions by 2050, it set a benchmark of lowering greenhouse gas levels to 45 percent below where they were in 2010. Given that the IEA estimates that global demand for oil won't plateau until 2030, it seems unlikely that we will be able to mitigate the emissions caused by burning that fuel as growing and developing nations continue to demand it to power their electric grids and growing number of cars on bustling city streets.

Even efforts to unify our progress toward these goals like the Paris Climate Agreement seem to be inadequate in actually pushing us in the right direction. A full three years after the 75 countries signed onto the plan, most nations have fallen well short of expectations. According to Climate Action Tracker, an organization that is monitoring the progress of 32 countries that signed onto the Paris Agreement, our current levels of greenhouse gas emissions would result in a temperature increase of between 2.4 degrees and 4.3 degrees Celsius, with the most likely outcome putting us at a 3.2 degrees Celsius uptick by 2100. Even if countries meet the self-established goals put forward as part of the Paris Agreement, Climate Action Tracker projects the best case scenario would be a temperature increase of 2.3 Celsius — still not within the goal of just 1.5 to two degrees set by the agreement. Essentially, any progress we make is moving too slowly and is being undermined by the increasing demand for energy. For every step forward, we're taking at least one step back.

Dire as the IEA's report is — and don't get it twisted, it's real bad — there is some reason to hold out hope still. For the vast majority of the world, adopting clean and renewable energy solutions like wind and solar power is now actually cheaper than dirty-burning options like oil and coal. Some major polluters like India have pushed for actual, drastic changes, racing to become one of the biggest renewable energy producers in the world and pushing to get combustion engine cars off the roads in favor for electric alternatives. The country still deals with massive amounts of air pollution in its major cities, but all the more reason to push for progress. Even in the United States, which officially withdrew from the Paris Climate Agreement under the Trump administration's guidance, is making some strides. Despite Trump's position that climate change isn't real, major states and cities have pushed bills that set a goal of net-zero emissions by 2050. All of this might not be enough, but it's a decent baseline to push others toward similar goals. The outlook isn't good, but that should be taken as a rallying cry rather than a sign to wave the white flag.

More like this
Texas officials responded to the winter storm with propaganda they got from a pro-fossil fuel think tank
By AJ Dellinger
Leaked calls reveal the conservative "master plan" to tank climate action
By AJ Dellinger
What cities will be most affected by climate change?
By Vanessa Taylor
Stay up to date