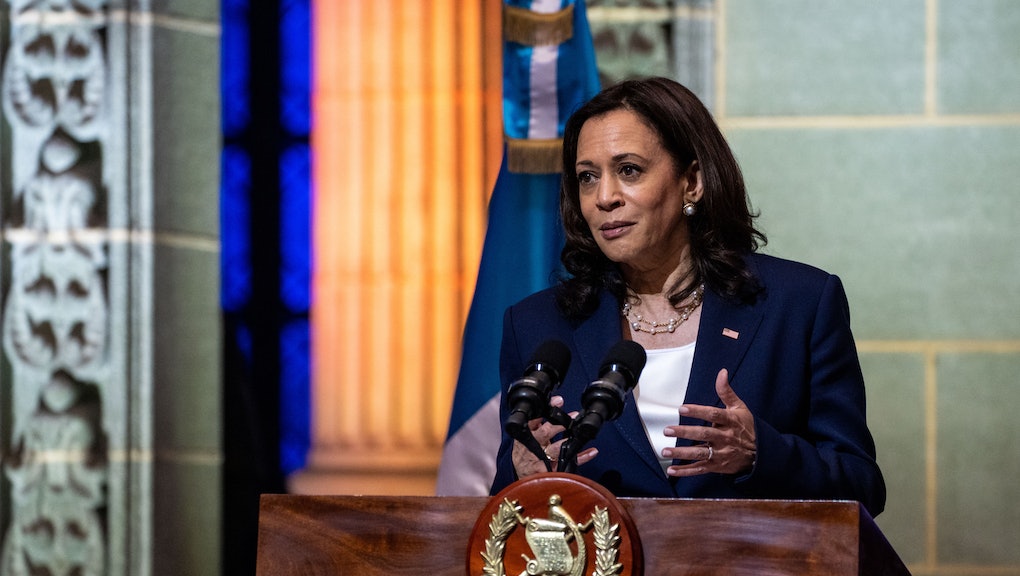 Throughout his presidential campaign, Joe Biden framed himself as the antithesis of Donald Trump, especially when it came to immigration. And after he won the presidency, Biden pledged that his administration would treat immigrants better than Trump's. But Vice President Kamala Harris's recent trip to Guatemala has illuminated that, unfortunately, things haven't really changed. She flat out told migrants "do not come" to the United States in comments that have put a harsh spotlight her first big diplomatic trip.

The trip to Guatemala — and Mexico — marks Harris's first foreign trip as vice president. Given that Biden put Harris in charge of everything going on at the southern border on March 24, it's quite the important trip. But during a press conference Monday, Harris drew criticism when discussing initiatives to supposedly address corruption and human trafficking in Central America.

"I want to emphasize that the goal of our work is to help Guatemalans find hope at home," Harris said at the press conference. "At the same time, I want to be clear to folks in this region who are thinking about making that dangerous trek to the United States-Mexico border: Do not come. Do not come."

She went on to add: "We, as one of our priorities, will discourage illegal migration. And I believe if you come to our border, you will be turned back."

The irony of the vice president of the United States coming to Guatemala to preach about plans to address corruption while also telling people not to migrate is quite rich. After all, the U.S. helped to destabilize countries throughout Latin America. In 1954, America backed a coup in Guatemala against Jacobo Árbenz. As The Guardian reported, the U.S. also backed the Guatemalan military, which carried out a genocide against Indigenous people in the country; between 1960 and 1996, about 200,000 people were killed.

On Twitter, Rep. Alexandria Ocasio-Cortez (D-N.Y.) called Harris's speech "disappointing to see". Ocasio-Cortez first pointed out that "seeking asylum at any U.S. border is a 100% legal method of arrival" and added, "the U.S. spent decades contributing to regime change and destabilization in Latin America. We can't help set someone's house on fire and then blame them for fleeing."

Last month, the U.S. reported that over 178,000 migrants attempted to enter the country at the southern border, which is the highest one-month total in 20 years. Because a number of migrants have been Guatemalan, outlets like The New York Times have referred to the country as "America's best chance to fix the immigration problem." However, that goes to show that the Biden administration isn't unique in ignoring the U.S.'s role in destroying countries, and trying to frame the resulting influx in migration as a mysterious "problem" thrust upon us. Harris herself, in an interview with NBC's Lester Holt, described her focus as identifying the "root causes" of immigration and working to rectify them.

This willful forgetfulness has defined American politics, even outside of immigration, for some time. But it's particularly concerning now given that the Biden administration is already rapidly reneging on its past promises regarding immigration. While Biden claimed immigration reform as one of his central platforms, his administration broke a bunch of promises after only a month.

For example, the Biden administration decided to reopen a detention center in Carrizo Springs, Texas, that holds migrant children. In addition, it decided to reopen the Homestead detention center in Florida. Renamed the Biscayne Influx Care Facility, the Miami Herald reported that it would detain teenagers between the ages of 13 to 17. And in April, the Biden administration announced agreements with the governments of Mexico, Honduras, and Guatemala to increase the number of police and military members to monitor migrants and refugees attempting to enter the U.S. Per USA Today, Guatemala deployed over 100,000 police and military officials to its southern border that same month.