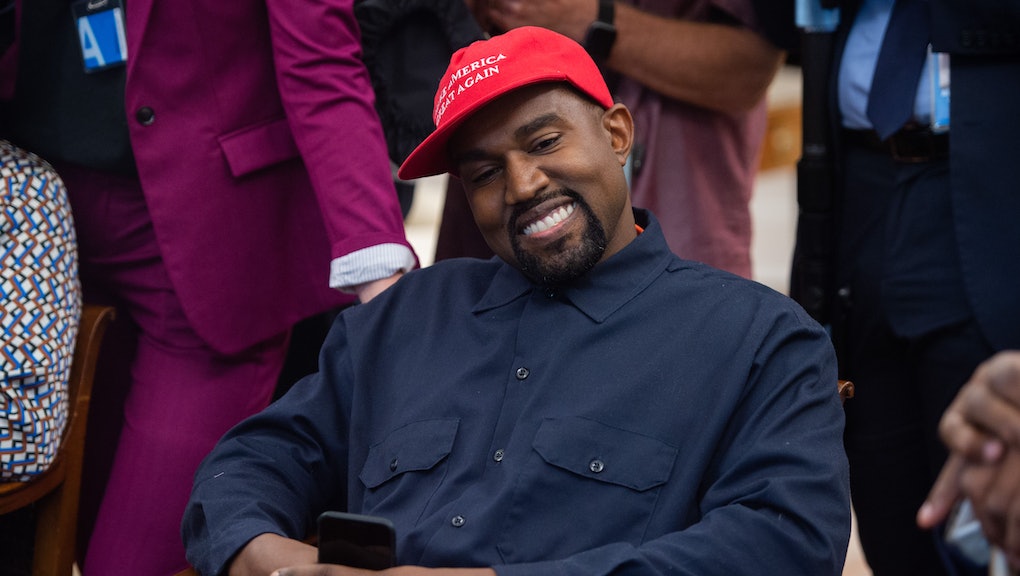 Kanye West's presidential campaign is getting help from Republican operatives

Kanye West is still running for president this fall as an independent candidate, representing what Ye dubbed the “Birthday Party,” because “when we win it’s everybody’s birthday.” Now some longtime Republicans are evidently throwing their weight behind the rapper, working behind the scenes to get West on the ballot in as many states as possible. Since several of the operatives have ties to President Trump, folks on both sides of the aisle are speculating that furthering the celebrity’s political ambitions is part of a coordinated effort by Republicans to siphon votes from Joe Biden, the presumptive Democratic nominee.

As first reported by New York Magazine, several people working on West’s behalf are also active in Republican party politics. Chuck Wilton, one of the three electors Ye’s campaign named in its filing to get on the ballot in Vermont, was also elected by the Vermont Republican Party in May to be a delegate for Trump at this year’s Republican National Convention. If a candidate wins a given state, electors are the people who vote for them in the Electoral College. Wilton’s wife, Wendy, is also listed on West’s filing as a possible elector — and she’s a Trump appointee to the United States Department of Agriculture.

Wilton said he was connected with West’s campaign “through political contacts.” “Somebody said that Vermont needs electors for certain people and [it was] something I said that I’m more than willing to do,” he told New York Magazine, adding that he’s “not disappointed with [Trump] but wanted to search out some more alternatives to him.” Wilton said West’s policies seem to align with his own “conservative libertarian/center right” views.

Similarly, Republican operative Gregg Keller was listed as the West campaign’s point of contact in its filing in Arkansas. Keller was formerly the executive director of the American Conservative Union and worked for a number of prominent Republican politicians like Mitt Romney and Josh Hawley.

Just yesterday, Lane Ruhland, a longtime Republican lawyer with ties to the Trump campaign, submitted the required signatures to get West on the ballot in Wisconsin, slated to be a major battleground state in November. Ruhland is one of the attorneys representing the Trump campaign in a lawsuit against a local Wisconsin TV affiliate over an anti-Trump ad they aired from the Democratic super PAC Priorities USA.

Trump denied having anything to do with West’s campaign. "I like Kanye very much," he said at the White House on Wednesday night. "I have nothing to do with him being on the ballot. I'm not involved."

Meanwhile, the Wisconsin Republican Party celebrated West’s addition to the ballot and Ruhland’s involvement. "It appears that the Kanye West campaign made a smart decision by hiring an experienced election attorney," Alesha Guenther, the party's spokesperson, told CNN in a statement. "We welcome Kanye West and all other candidates who qualified for ballot access to the race, and look forward to delivering Wisconsin's 10 electoral votes to President Trump."

As soon as West announced his intentions to run for president via tweet on the Fourth of July, leading Republicans, including Trump, mused that the rapper’s name on the ballot could pull votes from Biden, especially among young Black Americans. "That shouldn't be hard," the current president tweeted. "Corrupt Joe has done nothing good for Black people!"

Current polling shows Biden with a massive lead among Black voters, but support for the candidate wavers with young people. A recent poll by The Washington Post found that 87% of Black seniors think the former vice president is "sympathetic to the problems of Black people in America," while just 66% of Black adults under 40 agree with that statement. Trump’s campaign strategy with Black voters involves courting young people in cities in battleground states and suppressing turnout for Biden.

Whether boosting West as a decoy candidate is truly the Republican party’s covert aim remains to be verified. Democrats were critical of the developments in Wisconsin and elsewhere, however. "Thankfully the Trump team is showing their cards that the real force driving Kanye West to run is not people but Trump," state Representative David Bowen, a Democrat from Milwaukee, told CNN. "This is clearly a targeted effort by Republican operatives to cause confusion and problems for typically Democratic voters on Election Day. It's sad to see a popular music artist like Kanye be used as a pawn to trick his own people and fans to vote for a fake campaign."

Wisconsin’s lieutenant governor, Mandela Barnes, tweeted on Wednesday that Republican involvement in Ye’s campaign is “as big a circus as it looks. A dark twisted fantasy, if you will. A distraction. This is what desperation looks like."

Meanwhile, West isn’t even in the country. In the wake of his disastrous campaign event in South Carolina, where he claimed Harriet Tubman never freed enslaved people and broke down crying while publicly discussing the decision not to abort his eldest daughter, things have been understandably tense between the star and his wife, Kim Kardashian West. Rumor has it their marriage is on the rocks, though Kim did issue a statement about Kanye’s struggle with bipolar disorder, asking for “compassion and empathy” from the public. A private jet whisked the Kardashian West family to a “fortress” on a tropical island, where TMZ speculates the couple is trying to patch things up away from prying eyes.

What this does mean is West’s campaign is being run entirely without him. That lends credence to the claims that his political aspirations are being puppeteered by Republican operatives, who certainly have something to gain from the chaos the rapper is excellent at stirring up. After all, Trump and West have been buddies for years. They’re both great showmen. And it makes a lot of sense for Trump’s allies to use the rapper as both a cover and a diversion — though we certainly hate to see it.

More like this
Steve from 'Blue's Clues' gave us the closure we didn't know we needed
By Kara Weisenstein
Live from New York: Revisiting the totally bonkers era of post-9/11 'SNL'
By Rafi Schwartz
The 8 best reality shows you're not watching, but should be
By Brandon Yu
Stay up to date