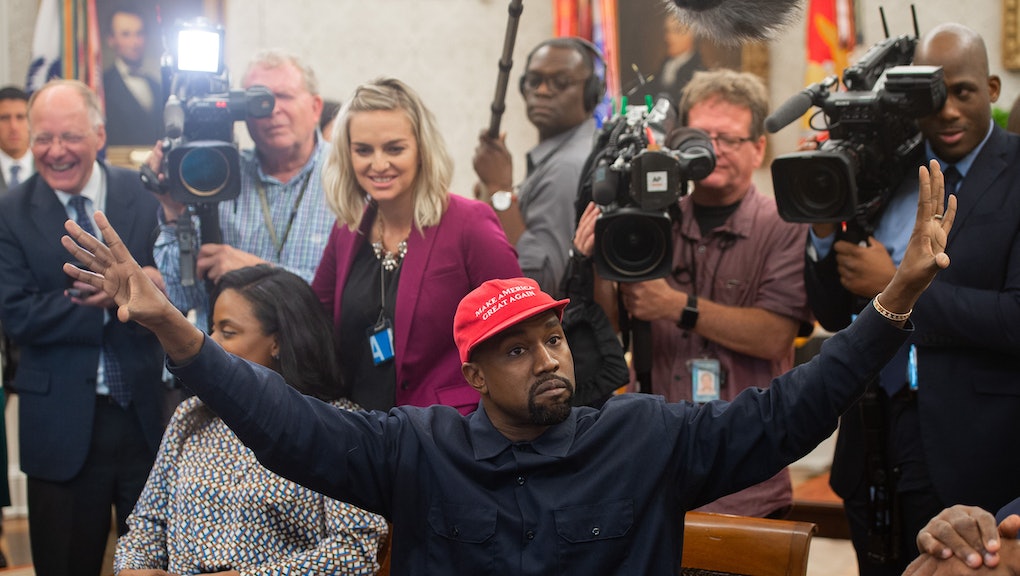 Kanye West made the most somber 4th of July in history even worse when he tweeted his intentions to run for President this November. “We must now realize the promise of America by trusting God, unifying our vision and building our future. I am running for president of the United States!” Ye tweeted on Independence Day from his Wyoming mega-ranch, where he’s been holed up with Kim and their kids.

The country is smashing its own grim coronavirus records, as outbreaks flare up in states that rushed to reopen. The uprisings in response to George Floyd’s murder have become the largest protest movement in American history. Meanwhile, the rapper and billionaire who posited slavery was a choice not so long ago thinks he’s qualified to be Commander in Chief.

Listen, when my phone “pinged” with the news notification that Kanye was presumptively running for president, I was furious. “I can’t believe I’m going to have to write about this on Monday,” I fumed to my sister, sitting six feet away. Other than Elon Musk, who tweeted his support for candidate West, most people seem to share my outrage. The responses online ranged from pithy to scathing. “Imma let you finish but no,” popular Twitter user @HoarseWisperer wrote.

Ahmed Baba, editor-in-chief of Rantt Media, criticized West and Musk for “treating the most consequential election of our lifetime as a joke,” noting the billionaires’ money will shield them from the outcome of their meddling. “We’re sick of being trolled by oversized egos. Step up in a meaningful way to help us defeat Trump or sit down quietly,” Baba added. His missive was retweeted by the likes of director Judd Apatow, who appended, “All to sell shoes and cars.”

Now, four months out from a general election isn’t the most ideal time to announce your candidacy for the presidency. According to Ballotpedia, Kanye has already missed the deadline to appear on the ticket in November in six states. That means voters in populous states like North Carolina, Texas, New York, New Mexico, Maine, and Indiana would have to write-in Ye as an independent candidate, which seems far-fetched. There’s still time for West to get on the ballot in states like South Carolina, Florida, Missouri, Colorado, and Michigan, however.

Kanye’s candidacy makes a certain sort of twisted sense in this dumpster fire of a year we’re having, but that doesn’t mean it’s not a ridiculous and dangerous prospect. The thing is, Kanye doesn’t think this is a joke. He really believes he could be President of the United States — and who can prove him wrong? There’s another ego-maniacal celebrity in the White House right now, and everyone treated Donald Trump like a joke till he improbably defeated Hillary Clinton in 2016. Now look where we are.

There’s no time for these hijinks from Kanye West right now. The country doesn’t have the mental or emotional bandwidth. Most reasonable people are focused on eradicating coronavirus, abolishing racism and ousting Trump from the White House — none of which are easy tasks. West and his fellow celebrity billionaires need to be part of the solution to these problems, not further endanger democracy.