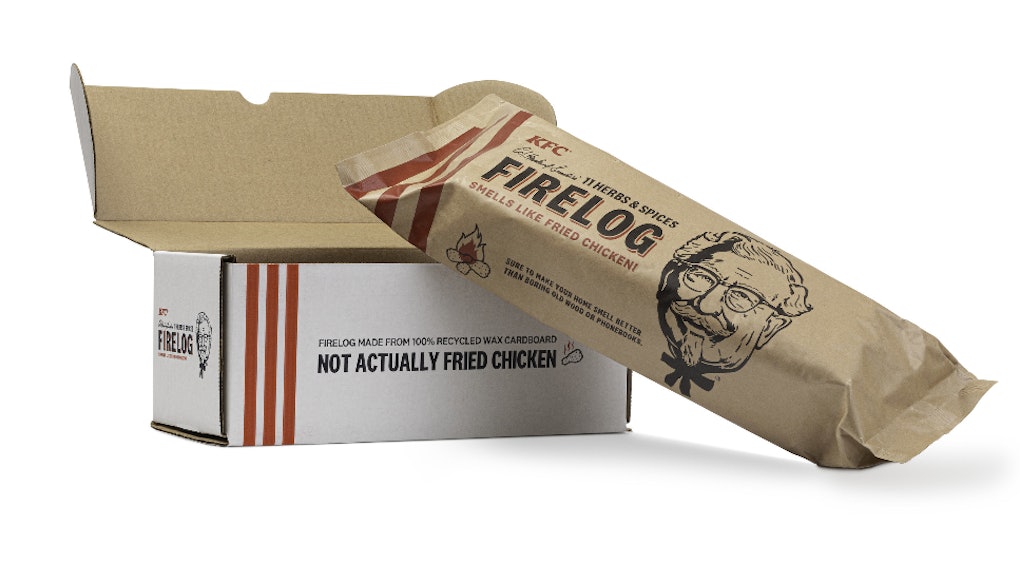 KFC's fried chicken-scented firelog is a natural conclusion to 2019

This past year has seen the rise of plenty of strange people, ideas, things. Among my favorites were the chicken sandwich wars that Popeyes started by releasing their own (and best) version. It was the moment in 2019 when fried chicken became the subject of endless discussion. But because we live in a time when nothing that goes viral can exit the spotlight gracefully — it must, instead, have every last drop of glory squeezed out until eventually becoming the subject of bitter think pieces — fried chicken will not exit 2019 with dignity. Fast food retailer KFC has a treat for those who simply cannot get enough fried chicken: environmentally friendly fried chicken-scented fire logs, just in time for the holidays.

That’s a lot to unpack, I know. The existence of such a product begs the question, who would want such a thing? Who wants their whole house to smell like fried chicken, but to lack actual fried chicken. It’s like being teased mercilessly for 6-8 hours. Apparently, the demand for such a product does exist — even before our collective cultural obsession with chicken sandwiches began this past summer. Last year, KFC unveiled the product for the first time, and the logs sold out in three hours, according to the New York Times.

“Last year, we captured the hearts, noses, and fireplaces of our fans, but thousands more were clamoring to get their hands on our limited firelogs. So, we brought our 11 Herbs & Spices Firelogs back with an exclusive partnership with Walmart to spread the finger-lickin’ good cheer,” said KFC’s CMO, Andrea Zahumensky, in a press release.

It's truly puzzling. The logs will be available at Walmart for $18.99 for a limited time. Which is a steal I guess, if you want the smell of fried chicken but no actual fried chicken. (Literally, who wants this? Please reach out to me. I find your taste perplexing and want to know more about who you are as a person. Did you like the film Gigli? Or that U2 album that automatically downloaded on everyone’s iTunes?)

But it’s not just the smell of the KFC firelog that is mind-boggling. It’s also the fact that the log is being pushed as an environmentally friendly alternative to real firewood. KFC has partnered with Enviro-Log, a company that makes “the greenest and most versatile firelogs on the market,” according to the company’s websites.

This is ironic because KFC is part of the global fast-food market which sells an amount of chicken that relies on factory farming and unsustainable production methods. There’s nothing environmentally friendly about most fast food (to be fair, KFC did recently test out a new, chickenless version of fried chicken, which was incredibly popular.)

Second, the logs are available to buy online from Walmart.com, which offers two-day shipping on the logs and most other products on their website. Two-day shipping is also famously terrible for the environment.

This isn’t the first time KFC has waded into the scented home goods department. They’ve also peddled a gravy-scented candle, which was available exclusively to customers in the United Kingdom and Ireland. KFC has essentially conceptualized a world where you and your loved ones bask in aromas that reflect your greasiest indulgences. “We hope you’ll cuddle up with your family or friends with a bucket of our world-famous fried chicken and a warm fried chicken-scented fire this holiday season,” Zahumensky said in the company's statement.

In 2019, which seemed to be overwrought with all sorts of heinous innovations, it makes sense that a fried chicken-scented, marketed-as-environmentally-friendly firelog is available to purchase at the country’s largest superstore chain.