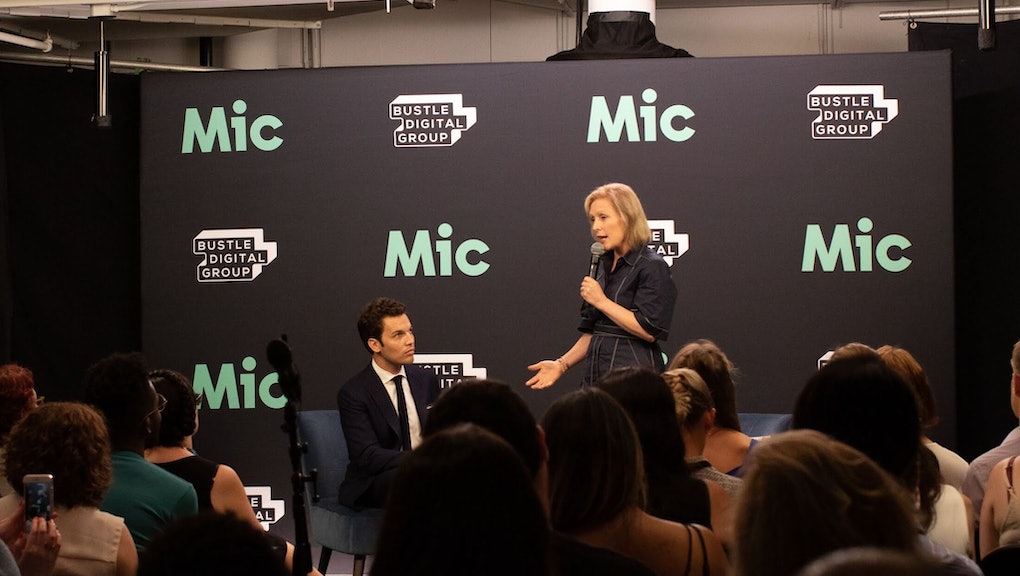 Kirsten Gillibrand on demanding Al Franken's resignation: "I do not have any regrets"

Senator Kirsten Gillibrand responded to a recent New Yorker article on the sexual misconduct allegations against former Democratic Senator Al Franken during a spirited town hall event on Monday evening, saying she has no regrets about calling for his resignation.

"There is no prize for someone who tries to hold accountable a powerful man who is good at his day job. But we should have the courage to do it anyway," Gillibrand said. "So, no, I do not have any regrets."

The comments came during a wide-ranging presidential town hall conversation with Mic at BDG's New York office. In the 45-minute conversation with Mic's Editor-at-Large Jake Horowitz, the democratic presidential candidate was asked about a range of topics, including President Trump's recent attacks on the "squad" of progressive Congresswomen currently making headlines.

But Gillibrand, 52, saved her fiercest comments for a question about whether she regrets calling for Franken's resignation in 2017, after the New Yorker report by investigative journalist Jane Mayer raised what many — including seven current and former Democratic Senators — viewed as credible doubts about the allegations made by Leeann Tweeden, a conservative talk show host.

"It only talked about one allegation ... but what about the seven other allegations?" Gillibrand asked. "There was really no critical or investigative journalism or reporting on the other seven, and that certainly causes me pause."

"It was eight allegations," she added. "Credible allegations, documented in real time at the time they were committed and corroborated by investigative journalists."

Tweeden's allegation dates back to 2006. In the years since, eight women came forward and accused the former Minnesota Senator of unwanted kissing, touching, and groping, some of which allegedly occurred during Franken's time in congress.

In Mayer's article, she framed Gillibrand as a catalyst for Franken's controversial resignation, but on Monday night, Gillibrand said that his decision to resign had nothing to do with her.

"My only decision was whether or not I chose to remain silent," Gillibrand continued. "My decision was whether or not I carry his water and defend him with my silence. I am a mother of boys. As a senator who has ... led and passed a unanimous bill that changed how we deal with sexual harassment in Congress, I did not want to be silent. I wanted to stand by those eight women.”

Gillibrand was the first Senator to speak out against Franken, leading a wave of other Democratic lawmakers to join in calling for his resignation. "Blaming a woman for the actions of a man," Gillibrand said. "I don’t believe in it. I don’t think it’s right."

At the time of his resignation, Franken did not express remorse; instead, he questioned why he was being held to a higher standard than the President. On the Senate floor, he criticized the Republican party and decried the attack against him as unfair.

"I, of all people, am aware that there is some irony in the fact that I am leaving while a man who has bragged on tape about his history of sexual assault sits in the Oval Office and a man who has repeatedly preyed on young girls' campaigns for the Senate with the full support of his party,” Franken said, in December of 2017.

Speaking with the New Yorker, Franken distanced himself from the allegations made against him by Tweeden, though he insisted that he is supportive of the #MeToo movement. “My first instinct was ‘This doesn’t make any sense. This didn’t happen,'" Franken told Mayer. "But then, when they started adding up, I said, ‘Well, maybe I’m doing something I’m not aware of.’ ”

Gillibrand, who is campaigning as "the best candidate for women," says she has unwavering support for the women who accused Franken.

"The truth is, yes, I would stand by those eight women today," Gillibrand said. "Because they have a right to be heard. They have the right to tell their truth. Especially if they are not being believed, or ignored, or listened to — and if the person they are speaking out against is a powerful man. My job is to lift up those voices not being heard and to at least demand some measure of accountability."