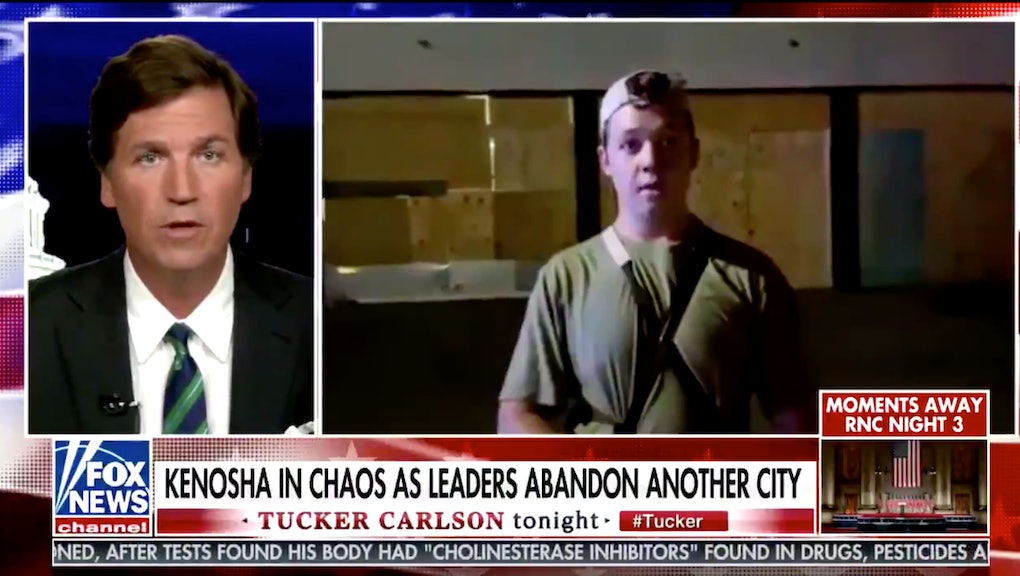 Earlier this week, when Kyle Rittenhouse, an aspiring police officer and President Trump supporter drove from Antioch, Illinois, over the border to Wisconsin, he may not have explicitly planned to shoot two people to death. But he certainly seemed to embrace the possibility. The 17-year-old, whose social media feed was reportedly littered with Trump slogans and "blue lives matter" messages, went so far as to pack an assault rifle for his trip across state lines with the goal of pushing back against the ongoing social justice protests in Kenosha, Wisconsin, where on Sunday police shot Jacob Blake, an unarmed Black man, seven times in the back.

"Our job is to protect this business," Rittenhouse, gripping his gun, told the ultra-right wing Daily Caller just hours before he shot and killed two protesters and injured a third. "And my job also is to protect people. If someone is hurt, I’m running into harm’s way. That’s why I have my rifle. I’ve got to protect myself, obviously. But I also have my med kit."

Rittenhouse, obsessed with the neo-fascism of the president's "law and order" campaign, and whose access to a weapon of war emboldened him to cross state lines and stand alongside members of a local militia, now stands accused of first-degree intentional homicide. And his case has quickly become the latest cause célèbre among the (formerly submerged) denizens of the right-wing fever swamp who, over the past four years, have been emboldened to push out of the fringes of the GOP (in form, albeit not in function) to become the public embodiment of mainstream Republicanism under Trump.

"How shocked are we that 17-year-olds with rifles decided they had to maintain order when no one else would?" Fox News host Tucker Carlson asked on Wednesday night's broadcast. "Everyone can see what was happening in Kenosha. It was getting crazier by the hour."

Carlson is hardly alone in his ex-post-facto justification of Rittenhouse's killings — the sort of bad faith "hey, I'm just asking questions" framing that positions someone who crossed state lines, killed two people, and then calmly walked past incoming police on his way to hide back home as a heroic martyr for The Cause. (In this case, the cause being white people who came heavily armed to tamp down a burgeoning social justice movement.) Following Rittenhouse's arrest on Wednesday, a grotesque conservative counter-narrative began to coalesce, boosted by pundits and politicians alike. To varying degrees of specificity, Rittenhouse has been portrayed across right-wing media as a victim of mob violence who opened fire in self defense, as well as a noble if tragic champion of Liberty and Freedom (which almost always means protecting tire dealerships or pawn shops with lethal force if necessary).

From Arizona Rep. Paul Gosar, a man whose own family cut an ad urging his district to vote against him, calling Rittenhouse's shooting of multiple people "100% justified self-defense" ...

... To Florida Rep. Matt Gaetz, who at least had the political acumen to couch his vigilante boosterism in vague platitudes rather than name Rittenhouse outright ...

... To the overtly Trump-friendly New York Post, which lent its journalistic patina (such as it is) to afford Rittenhouse an aura of innocence and respectability it has conspicuously denied others.

Rittenhouse is the inevitable outcome of a party that endorses Arkansas Sen. Tom Cotton's authoritarian New York Times essay calling for military intervention to end Black Lives Matter protests. He is what happens when the Tucker Carlsons and Laura Ingrahams and Alex Joneses of the world give nightly screeds about urban decay and antifa super-soldiers and use a whole host of racist dog whistles to saturate the discourse to the point that they become the mainstream opinion of a major political party. If Rittenhouse is somehow a victim, as the right-wing propagandists would have you believe, he's a victim only in that the people whose poisonous politics and punditry created the toxic atmosphere in which he committed his alleged crimes are now the ones exploiting him for the clout, retweets, and viewer numbers that make the culture war so profitable for places like Fox News.

And even then: Kyle Rittenhouse stands accused of murdering two people. Conservatives increasingly want you to believe that he is a hero. If they get their way, the people he shot in Kenosha won't be the last — they'll just be the start.

More like this
This FBI report on QAnon's future is terrifying
By Rafi Schwartz
Here's a chilling peek into just how close Trump got to running a police state
By Rafi Schwartz
A Minnesota college professor raised $200k in Philando Castile's name. Where did the money go?
By Rafi Schwartz
Stay up to date