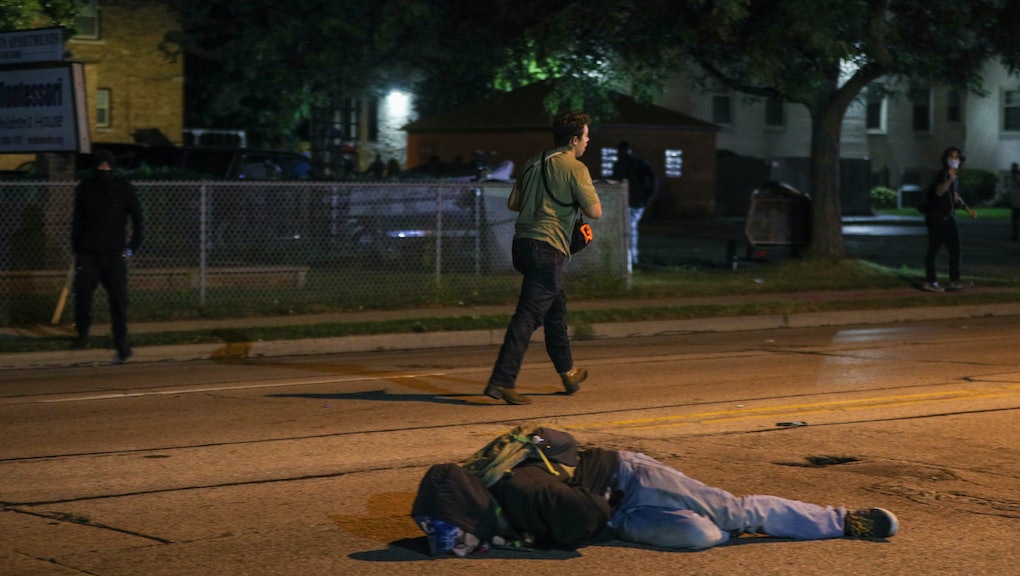 Police have arrested 17-year-old Kyle Rittenhouse at his home in Antioch, Illinois, some 20 miles from Kenosha, Wisconsin, where Rittenhouse stands accused of opening fire on protesters demonstrating against the police shooting of Jacob Blake, an unarmed Black man, on Sunday. He will reportedly be charged with first-degree murder, after shooting at least three people late Tuesday evening. Two of his alleged victims have died, while a third remains hospitalized.

Rittenhouse is not named in a statement posted to the Antioch Police Department's Facebook page announcing the arrest, but his identity was confirmed by CBS News. In its press release, the Antioch Police Department said Rittenhouse is "currently in custody of the Lake County Judicial System pending an extradition hearing to transfer custody from Illinois to Wisconsin."

The shooting, and subsequent escape by Rittenhouse, received widespread coverage Tuesday, as footage of both the shooting itself, its immediate aftermath, and the largely friendly interactions between Kenosha police and a group of armed white men were shared widely on social media. Rittenhouse was a supporter of Blue Lives Matter, per Insider, and had participated in a program for youths interested in law enforcement.

Rittenhouse was reportedly among the members of the self-described "Kenosha Guard" militia, which had posted a "call to arms" calling on "armed citizens to protect our lives and property" amid the protests. According to his social media presence, as well as videos taken during the protest obtained by the Milwaukee Journal Sentinel, Rittenhouse considered himself a militia participant, at one point appearing in a clip of a group of armed men being thanked by police officers for their presence at a building near the epicenter of the protests, despite the ongoing curfew in town.

"We appreciate you guys," one officer is heard telling the group. "We really do."

In a separate piece of footage, a figure now believed to be Rittenhouse is seen opening fire on protesters, then walking away with his hands in the air as police vehicles drive past him. The Milwaukee Journal Sentinel reported that there were nearly 500 combined police officers and National Guard soldiers on hand during Tuesday night's protest — a number poised to grow, after President Trump announced that he and Wisconsin Gov. Tony Evers (D) had agreed that the president could send additional troops to the city.

The police shooting of Blake — which occurred in front of several of his children — has set off the latest in a series of social and criminal justice protests this year, following the police killing of George Floyd in Minneapolis. While Blake, who was shot seven times, survived the incident, he is reportedly paralyzed from the waist down.