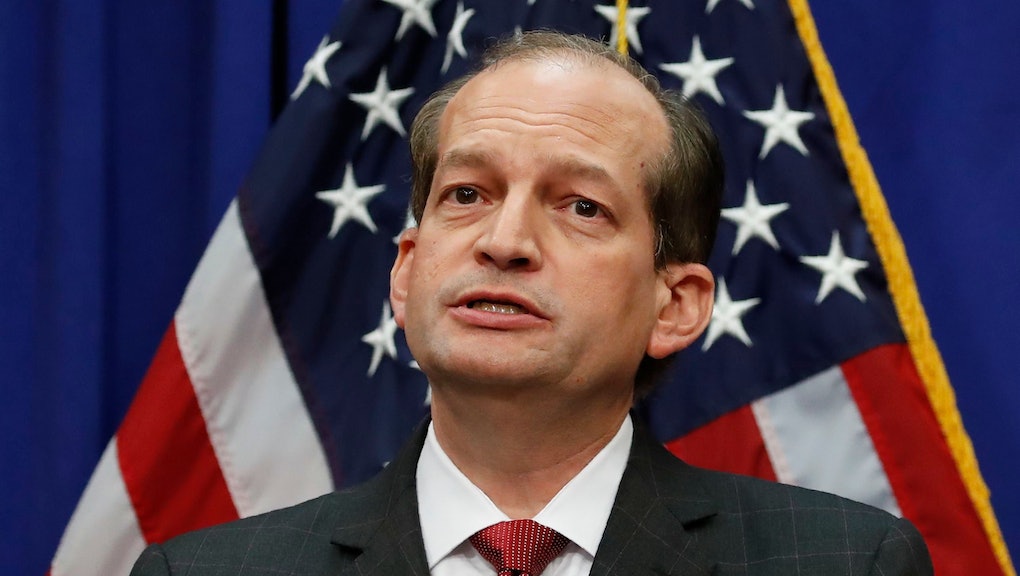 On Friday, July 12, Labor Secretary Alex Acosta resigned from President Donald Trump's cabinet after continued scrutiny over his involvement in a 2008 plea deal for billionaire and convicted sex offender Jeffrey Epstein. Acosta made the announcement while standing next to Trump, who said, “I hate to see this happen” about Acosta's decision and insisted he had nothing to do with it.

Acosta was appointed to the position of Secretary of Labor in 2017. Before that, between 2005 and 2009, he served as the U.S. Attorney for Southern Florida. It was during that time that he issued a plea deal to Epstein, reducing federal charges for the financier's alleged abuse of 36 teenage girls down to state charges, allowing Epstein to avoid federal prosecution. The deal was reached without the knowledge or consent of many of Epstein's alleged victims.

Years later, in 2018, a Miami Herald investigation revealed the specific details of the deal that Acosta made with Epstein, noting that it enabled Epstein to serve just 13 of an 18-month jail sentence. Now Epstein is facing new charges for sex trafficking and sex abuse, in New York and in Florida. Multiple women have come forward alleging that as minors, Epstein sexually abused them. Some women have also said claimed that Epstein let his wealthy friends, including Prince Andrew and lawyer Alan Dershowitz, allegedly abuse them as well. Andrew and Dershowitz have both denied these allegations.

Epstein has also been connected to President Trump and former President Bill Clinton, the latter of whom traveled with the billionaire around the world in the early 2000s. Both men have repeatedly denied any knowledge of Epstein's crimes, according to the New York Times. Epstein, who was arrested in New York on July 6, has pled not guilty to all charges brought against him. If convicted, he could face up to 45 years in jail.

Two days before Acosta's resignation, he gave a press conference defending his decision to cut Epstein such a lenient deal years ago. “We believe that we proceeded appropriately,” Acosta said on July 10, according to the Associated Press. “We did what we did because we wanted to see Epstein go to jail. He needed to go to jail.”

In a series of tweets posted the day before, Acosta condemned Epstein's alleged crimes, and thanked prosecutors for finding new evidence and building a stronger case against the billionaire.

"Now that new evidence and additional testimony is available, the NY prosecution offers an important opportunity to more fully bring him to justice," Acosta wrote.

Beto O'Rourke, who is also running for president, condemned Acosta for his actions — but also wrote that he should never have been appointed to the role of Secretary of Labor in the first place.

Candidate and Senator Bernie Sanders echoed a similar sentiment in his own statement, adding that a Secretary of Labor should not put the needs of billionaires before working people.

As Secretary of Labor, Acosta oversaw a federal agency that enforces 180 federal laws concerning nearly 10 million employers and 125 employees, according to the Associated Press. His resignation will go into effect on July 19, after which time Acosta's Deputy Secretary, Patrick Pizzella will serve as the new acting Secretary of Labor, Trump announced during the Friday morning press conference.