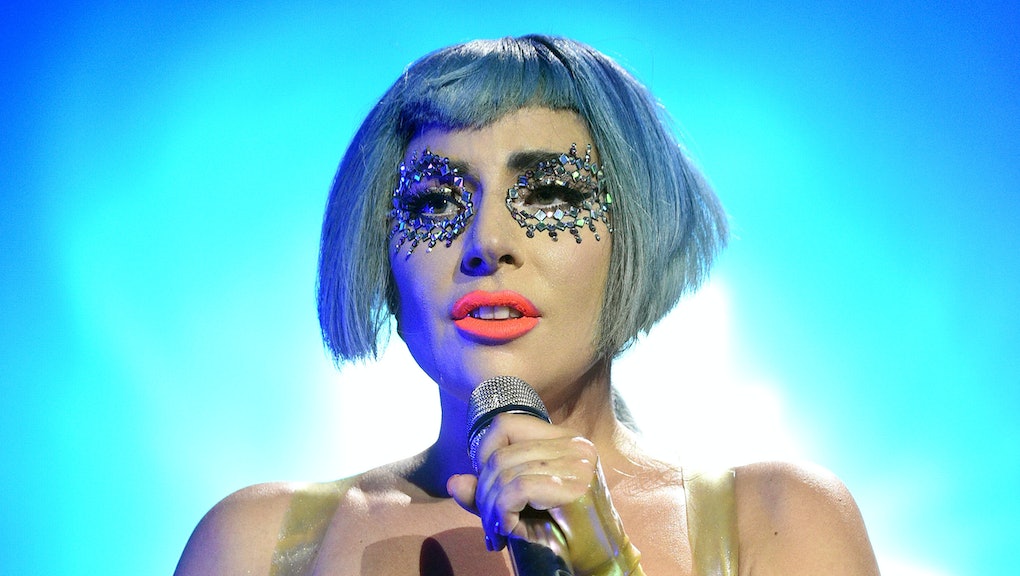 Lady Gaga released the first single from her forthcoming album last night, dropping the track and video for “Stupid Love” simultaneously. It’s a return to form for the pop chameleon. After nearly five years of stripped-down, heart-rending, country-inflected music (like her last studio album, 2016’s Joanne, and the soundtrack for A Star Is Born, featuring Gaga’s Oscar-winning single “Shallow”) the singer’s new music channels the high-octane pop whimsy of earlier releases, like 2013’s Artpop and 2011’s Born This Way.

Text at the beginning of the “Stupid Love” video sets the scene: “The world rots in conflict. Many tribes battle for dominance. While the Spiritual ones pray and sleep for peace, the Kindness punks fight for Chromatica…” We open on an alien desertscape populated by gangs represented by the various colors of the rainbow. Over the course of the song, Gaga and her “Kindness punks” unite the warring groups one-by-one through the power of high-octane choreography.

I’ll be honest: I saw the visuals for “Stupid Love” before I heard the song, and I wasn’t impressed. Muted clips of the music video popped up on my Instagram feed, and I thought, “Hmmmmm…” I thought the video looked like the bubblegum version of Mad Max; My dad said the aesthetic reminded him of old episodes of Star Trek. “Stupid Love” was shot on iPhone 11 Pro, as 15-second ads for Apple that play before the video on YouTube won’t let you forget. But the semi low-budget look is definitely intentional: the video was directed by frequent Sia collaborator Daniel Askill and inspired by ‘80s sci-fi and Japanese video games.

The music itself is infectious, which makes it pretty easy to accept the video’s colorful campiness. Gaga co-wrote “Stupid Love” with Bloodpop, who she also worked with on Joanne, and Max Martin, the legendary producer behind hits like Britney Spears’s “...Baby One More Time” and Taylor Swift’s “Shake It Off.” Most importantly, Gaga looks like she’s having fun. At a time when people are freaking out about various threats to our species (i.e. Trump, climate change, Coronavirus…) it’s a relief to see the pop star lean into her more ridiculous tendencies.

“Stupid Love” feels like the inverse of Grimes’s more nihilistic vision of dystopia. (The producer-performer released her own new music a week ago, the long-awaited album Miss Anthropocene, which is framed as an “evil” concept album about the perks of climate change. Grimes is also rumored to be featured on a forthcoming Gaga track.) But where Grimes luxuriates in destruction, Gaga leans into lacquered optimism. She doesn’t care if it’s stupid, she’s going to love her Little Monsters until they abandon their factions and groove together as one choreographed rainbow coalition.

Speaking of love and the weird ways people interact in the digital age: writer and editor Lindsay Crouse published a brilliant op-ed in The New York Times this week titled, "My Ex-Boyfriend’s New Girlfriend Is Lady Gaga." Earlier this year, you see, the pop star appeared on the arm of a "mystery man," who happened to be Crouse's college ex of seven years. The essay is a little bit about the weird, voyeuristic experience of realizing somebody she knew intimately was now getting intimate with a celebrity. (I recommend reading all the way to the end, because the kicker is genius.) But mostly, it's about the liberation Crouse feels when she realizes fame and our public personas are all just artifice. At the core, whether you're Lady Gaga or a "normie," we're all just humans looking for stupid love.

More like this
“Exhilarating, joyful, and of course pretty scary": Musicians on the pressures of returning to the stage
By Kelly McClure
Megan Thee Stallion's new single "Thot Shit" will launch another Hot Girl Summer
By Kara Weisenstein
Billie Eilish doesn't have to answer to us about who she loves
By Kara Weisenstein
Stay up to date