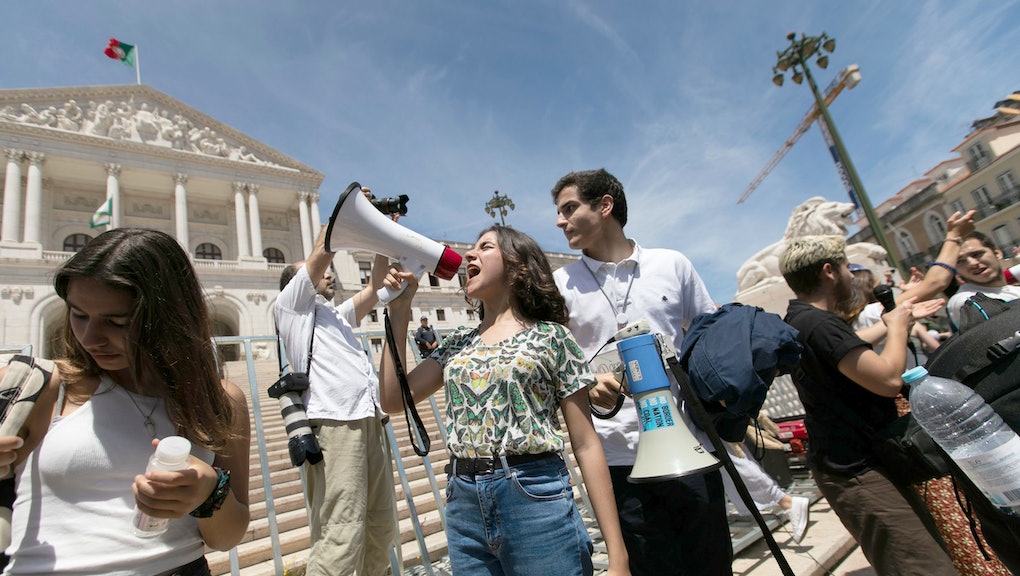 As intimidating as teens are, they might end up saving us from global destruction. They don’t have much of a choice since Boomers seem more than content with letting the world burn, and Millenials aren’t faring much better. Meanwhile, Greta Thunberg just landed in New York City to bring more attention to climate change, groups like March for Our Lives and United We Dream are comprised of and organized by teenagers and young adults, and now, some students in Las Vegas, Nevada, are coordinating a strike on behalf of their teachers, who they say are underpaid and disrespected by the Clark County School District.

The attempts to organize were partially spearheaded by 11th-grade student Gillian Sullivan, who posted a now-viral Tik Tok explaining why it was important for students in her school district to strike in solidarity with their teachers on September 5.

“My mom has been a teacher in Clark County School District for, I want to say over 20 years now,” Sullivan told Mic in a phone call. “Seeing the way it affected her really made me passionate about this issue.”

Sullivan explained that after witnessing the way teachers were disrespected at a board meeting in Mid-August, she was angry, upset, and inspired to take action.

“That night, I made a Tik Tok about it because I wanted to get it out there because I thought it was important for students to be informed about what was going on in their school district,” Sullivan said.

In her Tik Tok, which has been widely engaged with on the platform and on Twitter, Sullivan broke down why it was important that kids in her district cared about what was happening to the teachers in their district.

“So, our district is refusing to give teachers who spent the past three years earning enough credits out of their own pockets, spending extra hours outside of school to earn credits to get a raise,” Sullivan says in the Tik Tok, her painted nails waving around as she enunciates each point. “And our district won’t give it to them. Like, literally, they won’t pay the teachers what the teachers earned.”

The credits Sullivan is referring to are professional development training courses and certifications — often paid for out of the teachers’ own pockets and done on their own time, in order for them to become better, more well-rounded educators. The certifications can include anything from taking classes to volunteering in the community. This type of professional development is encouraged by many school districts across the country and typically coincides with an increase in salary. That was what Sullivan’s mother and other Clark County teachers were promised would be the case — but then the district didn’t hold up their end of the deal.

Sullivan and several other students, including students from different schools, began organizing a strike on behalf of their teachers, who were planning their own strike for September 10. They put a lot of thought into choosing how their actions could be most effective. They didn’t want to strike on the same day as the teachers, because student absences were likely to already be high, and it was possible that school would be canceled altogether — so initially they decided to strike on September 5.

“The deal that they are coming to isn’t exactly what was promised, in fact, they’re really giving teachers the short end of the stick with this deal,” Sullivan explained on Wednesday. “For example, my mom was supposed to earn roughly $10,000 more [per year] until she retires, and instead, the deal they’ve reached [with the county] is that teachers will accept a $5,000 raise for just this one time.”

By Friday, the district and the union reached an agreement to pay the raises that were initially promised — so the student strike was called off completely.

“I am no longer striking,” Sullivan told Mic. “But if there are any problems in the future I’m prepared to speak up again.”

In a Tik Tok about the strike being canceled, Sullivan thanked everyone for using their voices. “In Clark County School District, teachers got the raise that they deserved,” Sullivan said. “We did it, guys. Give yourself a pat on the back, give yourself a high five. We won! Like, yay!”

Sullivan told Mic that she’d never really seen a strike in real life and that she didn’t know much about labor movements, other than a few mentioned in the news. But, she hopes her attempts at a strike inspires others — especially in other school districts where teachers aren’t being treated well.