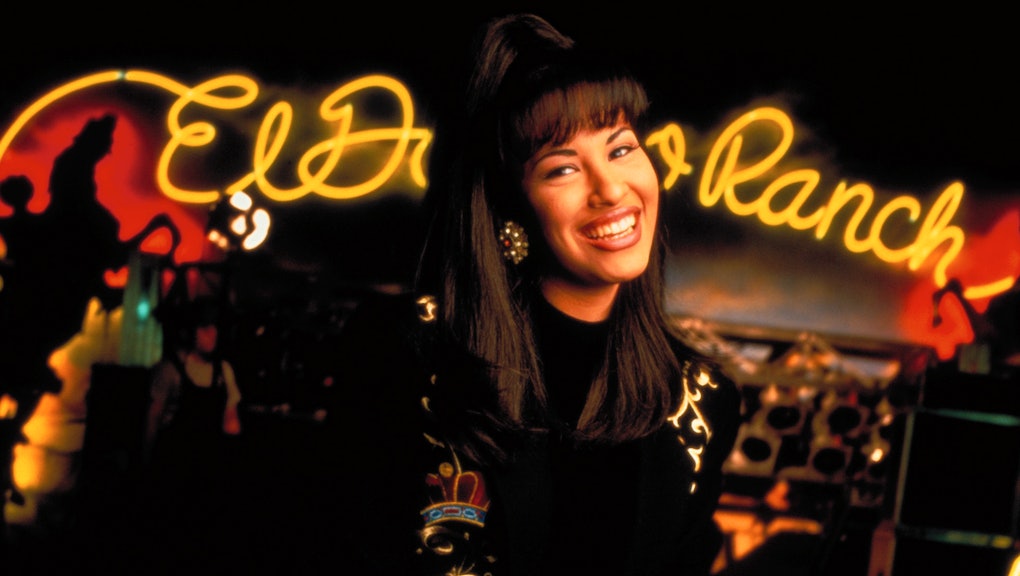 On February 26, 1995, Selena Quintanilla performed “Como La Flor” at Houston’s Astrodome. The video of the moment has been viewed on YouTube 99 million times, and it is the setting of the beginning and end of the 1997 biopic about her, released a few years after her death. On stage, Selena flips her hair over her shoulder, says a few words to the audience, and begins singing the iconic song's opening notes. Her hand floats up to her side, and she slowly twists it down, slightly flicking her wrist as she goes. The crowd goes wild. Her now infamous purple jumpsuit glitters. Any fan of the Mexican-American artist knows this moment — they’ve watched it thousands of times, have the exact cadence of Selena’s voice memorized, can most likely step along to her choreography as she dances across the stage.

The creators of Netflix’s new Selena series, due out in 2020, are aware of this. In the very first teaser for the show, which revealed that the Walking Dead’s Christian Serratos will take on the titular role, the Astrodome performance is referenced. The clip is in the same 3:4 ratio that her last concert was shot in. Then we see Serratos apply the performer's signature lipstick, her bangs perfectly fluffed, the steps of the “washing machine” on display as the flared legs of the glittery purple pantsuit swish around. Serratos is transformed into Selena. And Selena’s fans are ready for this next performance.

“I’m so excited for the show,” Gail Vivar, 22, told Mic. “Selena is my hero. I never had Disney channel as a kid so my mom would make me watch old Selena videos so she was my idol. “

Vivar is a Peruvian-American writer who just graduated from college. Like so many other young Latinx-Americans, she grew up with Selena as an icon — someone who gave her pride in her own identity. For Vivar, the Netflix show is an opportunity to make sure generations even younger than her, people who didn’t grow up with the VHS of Jennifer Lopez’s portrayal on hand.

“With everyone on Netflix now, especially the younger generation, they have a chance to learn about someone who we loved and looked up to,” Vivar said. “It’s more than just a reboot but a legacy we shouldn’t stop passing down to each generation. Even though I’m Peruvian-American, I feel like the connection to Selena and pride that she’s our icon.”

This sentiment can be followed throughout the dozens of fan pages on Instagram, Twitter, and Facebook. On her official Facebook page, Selena La Leyenda, which is run by her family and estate, thousands of comments flooded in response to the short teaser trailer. “As an avid Selena fan for life, I do have high expectations for this but I know it will be done with love and honor for Selena,” one person wrote. It’s a widely shared sentiment.

“I think it's hard to ground a figure like Selena who is so loved and so iconic in reality, and in order to do so, you have to be able to handle her background and her struggles very delicately,” Melanie Pineda, 19, a New York City college senior, told Mic. “There are a lot of Latino/as who are going to be looking at this, and a new generation that may not know about her at all. It's important that her story stay as true as possible, while also depicting just how important she continues to be for Latino communities today.”

Pineda became familiar with Selena through her mother, who immigrated to the United States while her Selena was at the height of her fame. It’s the way many of her fans were introduced to her, a Latina pop star in the United States. It is why her legacy is so precious. Because of this, many were concerned about whether or not Serratos would be able to pull off portraying Selena. Serratos is of Mexican and Italian descent. Though it should be remembered that a critique of Lopez’s casting in the 1997 film, even though she was selected by the Quintanilla family for the part, was that she was Puerto-Rican, not Chicana.

“I think that it's smart to cast a Mexican-American this time around, but from the trailer, it seems like this actress looks more like J Lo playing Selena than Selena herself,” says Pineda. “Obviously I don't want to judge her based on just two minutes of screen time, but if the story is being told and played out by Mexican-Americans, I think that will definitely bring more authenticity to the series. We'll just have to wait and see.”

Several Facebook commenters expressed disdain that they wouldn’t be using Selena’s voice for the music; there’s a general consensus it can’t be imitated. Even those apprehensive about the details in casting and whether or not it would stand up to Selena were excited that there was another project about the star. Pineda is hoping that we get a more fleshed out view of Selena’s life given the additional time in the show.

“I would love to see more of Selena when she started branching out to other industries, like the clothing line she wanted to make that unfortunately never happened,” Pineda says. “She was such a multi-talented person, and I think other portrayals have only really credited her musical talents rather than her artistic and business abilities.”

Selena Quintanilla’s legacy goes beyond the breadth of her own work, though in her short career she produced exceptional albums, including one that won a Grammy award. Her life was a constant exercise in breaking barriers: A woman dominating the Tejano music scene, a Latina dominating the Billboard charts and getting major radio play, an artist successfully crossing over from Spanish to English language music. Selena became a lasting icon, “la reina eterna.” Even after her passing, her name continued to do this work. Jennifer Lopez became the highest paid Latina actress in Hollywood for taking on the role of the star, earning one million dollars. In the years since Quintanilla’s passing, there’s been a Selena wax figure at Madame Tussaud’s, a M.A.C. makeup line, and a Forever 21 capsule collection.

In this regard, it’s somewhat of a safe bet that Netflix took on the Selena series. Because of her early passing, there is a limited amount content about her, and when there’s something new, a dedicated fanbase is there to consume. The M.A.C. collection sold out within hours of it’s unveiling, and the Selena clothing line at Forever 21 saw similar results.

The show will also costar Gabriel Chavarria as A.B. Quintanilla, and Noemi Gonzalez will play Selena’s sister, Suzette. Ricardo Chavira will play her father Abraham, and Seidy Lopez will player her mother Marcella. A young Selena will be played by Madison Taylor Baez. The six-episode series will follow the life of a young Selena who “navigates success, family, and music” in a coming of age story. Like the film, the series will be executive produced by members of Selena’s family, alongside the Latinx-centered production company Campanario.

“Selena is an inspirational figure who’s transcended generations. At Campanario, we’ve always known it was crucial for this series to find actors with the right mix of talent, charisma, and passion to honor Selena’s legacy and the story of her family,” Jaime Davila, the president and co-founder of Campanario Entertainment, told Mic in a statement. “Our casting director Carla Hool and her team have found an amazing cast to depict the Quintanilla family, and we’re sure fans everywhere will be captivated yet again by Selena’s incredible life.”

More like this
8 shows like 'Ted Lasso' to watch if you need more feel-good TV
By Brandon Yu
Issa Rae, Lil Nas X, and J-Lo just gave us a masterclass in social media
By Keith Nelson Jr.
Dua Lipa has officially distanced herself from DaBaby
By Kara Weisenstein
Stay up to date