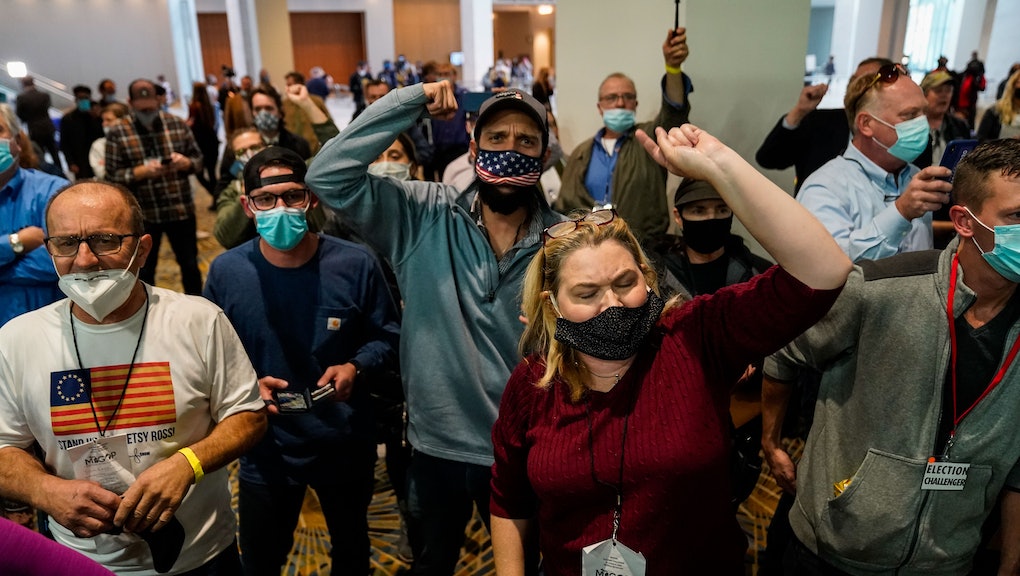 In the days leading up to and following the November 3 election, social network giants like Facebook, Twitter, and YouTube put in place new policies to combat disinformation on their platforms — much of which comes from the president himself. But it appears the increased scrutiny and moderation applied by the platforms failed to account for disinformation campaigns targeting Spanish language speakers. According to the New York Times, a surge of fake news stories, typically with a pro-Trump slant, were directed at Latinx people in an attempt to de-legitimatize election results.

The information started pouring in ahead of the election. Previous reports have documented how Spanish-language speakers were overwhelmed on WhatsApp with election misinformation efforts. The copy-paste style messages that you might expect to find in a chain email, with about the same level of legitimacy, started reaching people's inboxes. They accused the Black Lives Matter movement of channeling "the devil" and claimed the group's co-founder practiced witchcraft. Other posts downplayed the coronavirus and claimed the death toll was artificially inflated. Some sought to disqualify Joe Biden by questioning his Catholic faith and connecting him to socialism.

Following Election Day, the messages just kept coming. Users reported receiving texts and seeing posts claiming that the election was being stolen from President Trump. The posts insisted that Trump won Arizona, that Democrats were rigging the vote, and that George Soros was paying Antifa to riot in the streets.

Despite none of this being true, the information had a significant reach. Posts and messages containing disinformation popped up with more regularity this election cycle, and users unfamiliar with dealing with that type of content spread it. “There’s misinformation from people not even understanding how they are spreading it, that continues to stoke real tension and anxiety right now," Jacobo Licona, a disinformation researcher at Equis Labs, told the New York Times.

The companies that operate the social media platforms on which these posts are spreading appear to have been unprepared for the onslaught of Spanish language disinformation. According to the Times, Twitter saw several significant viral Spanish-language posts that pushed a false conspiracy theory claiming election workers in Arizona gave Trump voters pens that made their ballots unreadable and others saying the Capitol was being taken over by armed Antifa protesters. On Facebook, a Spanish video falsely claiming that Trump won re-election and was being censored by the media was viewed half a million times.

The issue has spread to YouTube, too. According to Vice, several extremely popular Spanish-language YouTube channels, including one associated with QAnon, started uploading videos and doing live broadcasts claiming that Trump won and accusing the Democrats of trying to carry out a coup.

The Spanish language blindspot shows just how unprepared social media giants often are for these widespread disinformation campaigns. The Times reported that some of the same Russian troll farms that targeted Black voters on social media in 2016 were hiring people in Mexico and Venezuela to spread Spanish language disinformation in the weeks leading up to the 2020 election. It appears the campaign was successful.

These types of campaigns have consequences outside of social media. In 2016, disinformation campaigns were credited with suppressing Black voters. This year, the efforts have led to people questioning the integrity of the vote count. Trump's own cries of voter fraud have riled up parts of the far-right and motivated his supporters to gather outside of polling places and demand to be let it. Their presence caused problems for election officials. In Arizona, armed protesters threatened to disrupt the vote-counting process.

Trying to stop the disinformation and the results of it have started to feel a bit like playing whack-a-mole. Even if you successfully stomp out one, another pops up in a place you weren’t expecting.