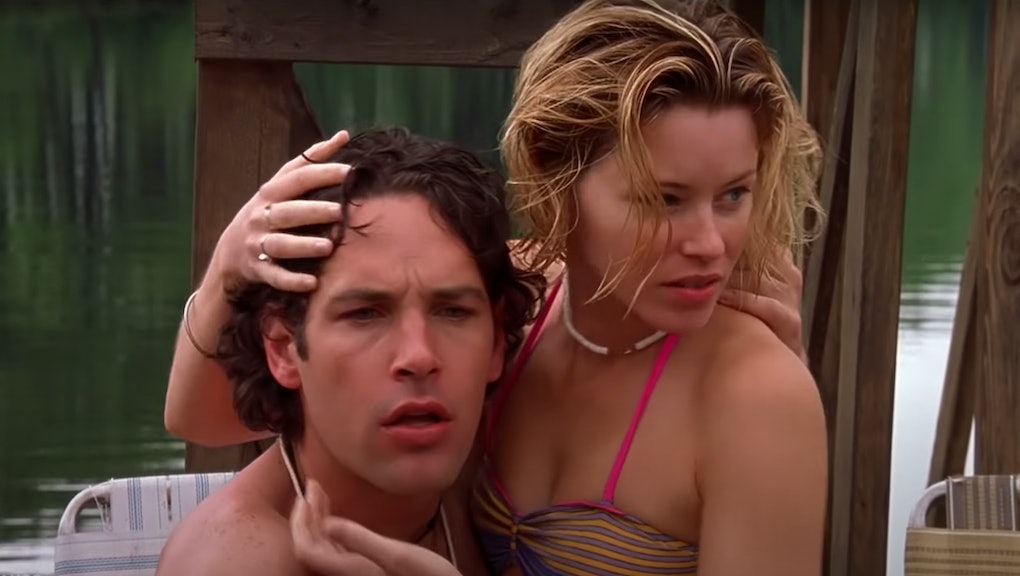 Paul Rudd is making out with Elizabeth Banks, and it’s making me sad. Not because he’s ignoring a drowning camper, eschewing his camp lifeguarding duties so he can swap spit with a blonde in a bikini. That bit from Wet Hot American Summer is unfortunate, yeah. Mostly, I’m feeling depressed because none of the activities being depicted on my TV will be possible this summer. Thanks to that bitch ‘rona, everything good is cancelled: summer camp, swimming, kissing… the list goes on and on.

Memorial Day is upon us, and usually that’d mean it’s time to fire up the grill, go to the beach or do whatever hot weather activity normally heralds summer for you. But this year will be different. People aren’t (supposed) to gather. And the idea of someone’s used medical mask floating in a swimming pool is enough to keep me away from the water, virus or none. Even though revisiting Wet Hot American Summer during a pandemic verges on masochism (Touching! There’s so much touching!) it’s still an excellent film to watch this weekend, as we all dream of summers-gone-by and try to make the most of a year overshadowed by disease.

For the uninitiated, here’s the film’s basic premise: It’s August 18, 1981, and it’s the last day of the summer season at the fictional Camp Firewood near Waterville, Maine. Campers and counselors alike have one final chance to spark a summer romance and find someone to kiss after that night’s talent show. The bulk of the movie just follows their various zany escapades over the course of the day. There’s a crazy drug-fueled dream sequence, a talking can of vegetables and a top-notch training montage. It’s ridiculous and hysterical.

Wet Hot American Summer is an ensemble comedy, packed with talent. You’ve got Molly Shannon as a weepy art teacher divorceé and Amy Poehler as a theater instructor with a closeted partner, played by Bradley Cooper (in his very first film role). There’s Rudd as the asshole lifeguard and Banks as the counselor he swaps spit with. But most of its stars were completely unknown at the time, and Wet Hot American Summer had a rough time getting financing until it cast its two biggest names (at the time), David Hyde Pierce and Janeane Garofalo.

When David Wain and Michael Showalter’s film came out nearly 20 years ago, in the summer of 2001, it flopped hard. Late film critic Roger Ebert hated it so much, he gave it one star and penned a satirical bad review to the tune of Allan Sherman's "Hello Muddah, Hello Faddah (A Letter from Camp).” It grossed a meager $295,206 and was only released in two theaters, both located in New York City.

But something happened in the years after Wet Hot American Summer was released on VHS and DVD in the winter of 2002. Slowly, so slowly, the film became a beloved cult classic. With almost 20 years of hindsight, audiences came to recognize what a creative, hysterical, wonderfully-weird movie it is. Netflix revived the franchise in 2015 with an eight-episode prequel series, Wet Hot American Summer: First Day of Camp. In 2017, the streamer produced another spin-off, set ten years after the original movie.

Those series are fine and capitalize on the fame many of the stars of Wet Hot American Summer subsequently found in the aughts. But there’s nothing quite like watching the original, made by a bunch of goofball nobodies over the course of a month on set at a real summer camp in Pennsylvania. The energy is frenetic, explosive and completely absurd. It feels a little like navigating this nonsense year — except in Wet Hot American Summer, life is way more fun.