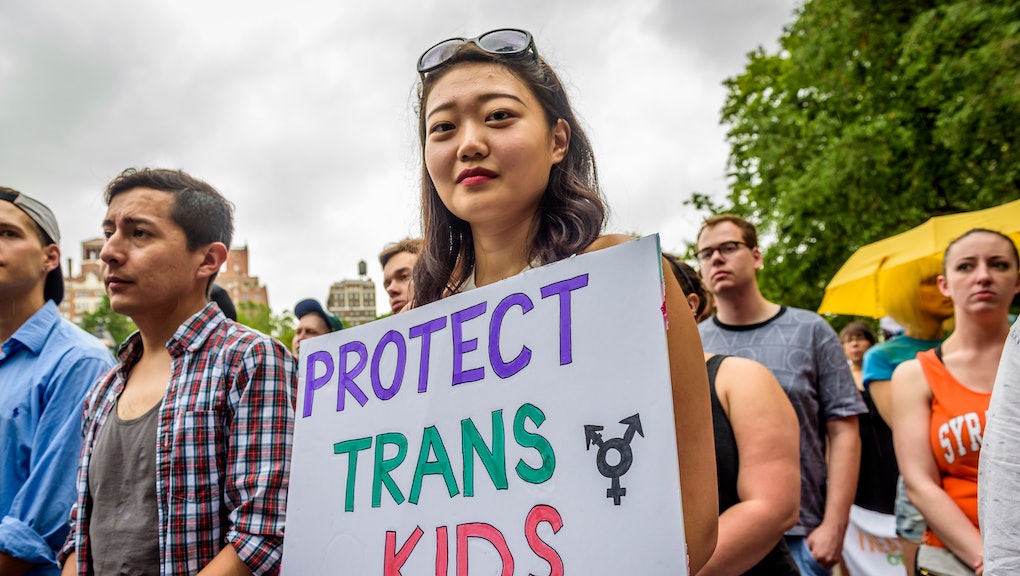 Following the Trump administration's announcement that it will roll back protections against health care discrimination, a coalition of transgender rights organizations filed a lawsuit Monday against the Department of Health and Human Services. A person's health care should not depend on their identity, and doctors should not have federal protection to deny service or care, the organizations say.

Lambda Legal filed a suit in federal court on behalf 10 LGBTQ-serving clinics and health care organizations, including Whitman-Walker Health and the Los Angeles LBGT Center. The suit, filed against HHS, argues that the agency's rollbacks of Obama-era health care protections for LGBTQ folks is illegal.

"When people go to a doctor’s office, hospital, or an emergency room seeking treatment, they expect and are entitled to receive care appropriate to meet their health needs without regard to who they are or the type of health care they seek," the claim argues. They further argue that under the Trump administration's rule, which is informed by "next-to-no legal, medical, or reasoned policy foundation" and is "contrary to the opinions of professional medical and public health organizations," care providers will now be able to discriminate against patients.

On June 12, HHS finalized changes to Section 1557 of the Affordable Care Act that would make sex discrimination by health care providers legal. While the changes do not say the word "transgender," advocates believe that repealing protections will pave the way specifically for transgender discrimination.

In addition to harming transgender patients, opponents of the HHS rule change say that transgender patients of color and poor transgender folks will suffer the most. "The federal government should be a partner in addressing the repeated violence perpetrated against Black and brown communities, against immigrants, and against transgender people, and today's action is about holding the administration accountable for the safety, well-being, and civil rights of our communities," said Naseema Shafi, the CEO of Whitman-Walker Health.

The lawsuit comes just a week after the Supreme Court ruled that LGBTQ employees are protected from workplace discrimination under Title VII of the Civil Rights Act and cannot be fired for their sexual or gender identity. The court found in its 6-3 decision that "an employer who fires an individual for being homosexual or transgender fires that person for traits or actions it would not have questioned in members of a different sex. Sex plays a necessary and undisguisable role in the decision, exactly what Title VII forbids."

While this ruling has no direct bearing on the Trump administration's new health care rule, experts say that the court's ruling could create precedent for deciding future cases as they relate to protections for marginalized groups. NPR reporter Selena Simmons-Duffin said that Supreme Court's decision "could make a legal challenge to [Section 1557] more likely to succeed if courts start looking at any law that talks about sex discrimination, and they start saying, 'Okay, well, now the Supreme Court tells us we should read that to cover LGBTQ people.'"

For those who have been fighting the Trump administration's rollback of legal protections for marginalized groups, including LGBTQ people, HHS's decision isn't exactly surprising. The fact that it comes in the middle of the deadly coronavirus outbreak, however, makes the matter that much more urgent. "For years, the Trump administration has utilized HHS as a weapon to target and hurt vulnerable communities who already experience alarming rates of discrimination when seeking care, even now, during a global pandemic," said Omar Gonzalez-Pagan, a senior attorney and health care strategist for Lambda Legal.

The HHS rule is expected to go into effect on Aug. 18.

More like this
Supreme Court justices' political leanings: A guide to the 2021 court
By Vanessa Taylor
Uber offered its drivers help with health care, but of course it was a mistake
By AJ Dellinger
The history of the LGBTQ+ Pride flag, from the OG rainbow to Progress Pride
By Vanessa Taylor
Stay up to date