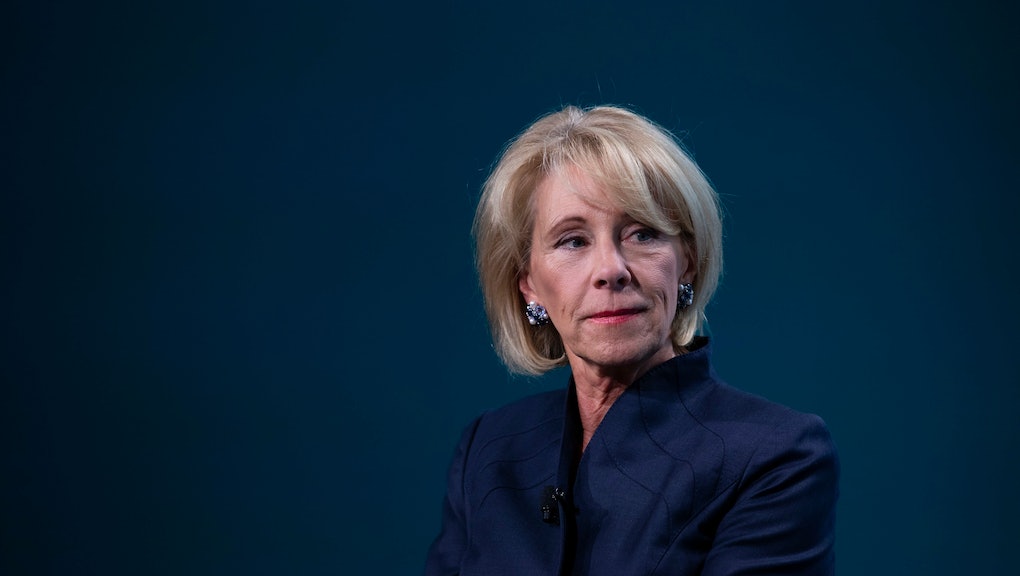 A new study from the Center for American Progress (CAP) reports that President Trump's Secretary of Education, Betsy DeVos, has been failing to protect the rights of LGBTQ students across the country. Evaluating the Department of Education (DOE)'s own data, CAP found that during DeVos' tenure, discrimination complaints made by LGBTQ students were more likely to be unaddressed or dismissed than those by heterosexual students.

According to CAP's study, the DOE was 54% less likely to investigate civil rights complaints that involved sexual orientation and gender identity. In the Obama era, 65.4% of those kinds of cases were closed without finding of wrongdoing or were dismissed. In the Trump era, however, that number rose to 91.5%. Complaints of that nature, found CAP, "were more than nine times less likely to result in corrective action under the Trump administration than they were under the Obama administration."

Additionally, complaints related to sexual orientation and gender identity were overrepresented, making up nearly 75% of all complaints made by students to the DOE. Transgender students' complaints were also overrepresented compared to their cisgendered LGBTQ peers — meaning that although transgender students represent a smaller portion of students, they were reporting higher instances of civil rights violations related to their gender identity or sexual orientation.

“These data really show that Betsy DeVos is not doing her job,” Frank J. Bewkes, one of the report’s authors, told the New York Times. “Her office just doesn’t seem to care about enforcing civil rights for these students.”

According to a DOE press release in June, data has shown that "students who file civil rights complaints under U.S. Secretary of Education Betsy DeVos’ leadership are served more efficiently and effectively than students who filed civil rights complaints during the previous administration." And in a statement to the Times, Liz Hill, a spokeswoman for the DOE, claimed that the CAP report was biased in its findings.

“These data were selectively compiled by a left-wing interest group to tell an ideological story,” Hill said. “No one should mistake this as unbiased. This department vigorously protects the civil rights of all students and will continue to do so to the fullest extent of the law.”

Back in 2017, one of DeVos' first acts in her role was to roll back protections for transgender students against discrimination enacted during Obama's presidency. And under her leadership, the DOE has followed the 2017 Trump guidance on gender identity, which dictates that gender identity is not covered under federal civil rights law. At the time the guidance was enacted, DeVos insisted that the DOE would work to protect LGBTQ students, despite following this directive. A Human Rights Campaign survey of 12,000 LGBTQ students, however, found that only 26% of the surveyed group reported feeling safe in their classrooms.

Now, the CAP study reveals even more significant issues with the DOE's supposed protections of these students. The report's release brought condemnation of DeVos from many politicians, including presidential candidate and Massachusetts Senator Elizabeth Warren, who tweeted: "We need a leader who will actually fight for our kids."

The study's findings send the disturbing message that concerns regarding the safety and wellbeing of LGBTQ students are not being taken seriously by DeVos and to the Trump administration. This calls for comprehensive advocacy on behalf of LGBTQ students in their schools and beyond. The protections set forth in the Obama administration were meant to serve as the beginning steps the DOE took in order to ensure the civil rights of all students.

More like this
A Philly foster agency can continue discriminating against LGBTQ families, SCOTUS rules
By Rafi Schwartz
The Biden administration just re-extended federal protections to trans students
By Rafi Schwartz
The history of the LGBTQ+ Pride flag, from the OG rainbow to Progress Pride
By Vanessa Taylor
Stay up to date