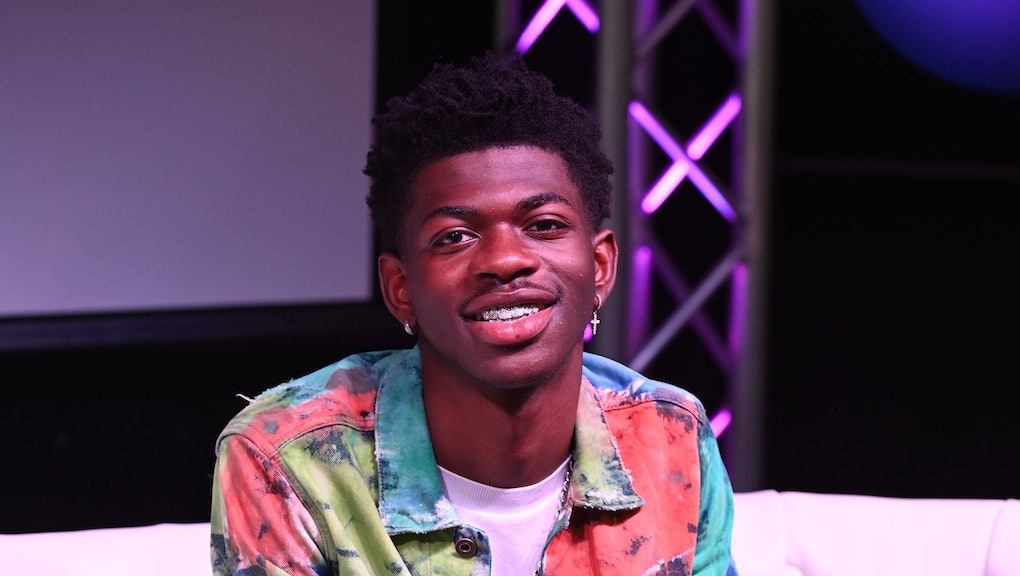 The fifth grade class at Ohio's Lander Elementary got a very special end-of-year surprise when Lil Nas X came to perform his hit song "Old Town Road" in their gymnasium. On May 29, the rapper shared a video of him singing along with the thrilled group of kids — or, more accurately, screaming along, as by the time Lil Nas X star got to the song's third word, he couldn't be heard over the students' voices.

Over the course of the previous week, the musician's Twitter followers had watched the heartwarming event come to fruition. First, on May 23, a video of the school's students dancing and singing to the hit song went viral when a teacher posted it to their Twitter account. Soon after, Lil Nas X responded to the tweet, asking when he could come and perform. Just six days later, he arrived at the school — dressed in cowboy boots and a hat, of course — and was promptly received by dozens of extremely excited 10 and 11 year olds.

“I saw y’all video, and I knew I had to come," Lil Nas X told the kid-filled crowd, as seen in the clip below. He asked the students for a few moments of quiet, and then began to sing, "I'm gonna take my horse to the old town road / I'm gonna ride til' I can't no more." It became clear early on that many of the kids knew every single word to the song, with some of them even demonstrating their own choreography.

In the video (recorded by Complex, which followed Lil Nas X on the trip to Lander Elementary), the rapper is heard asking the principal of the school (who posted the initial video), Felecia Evans, what she told the students about the surprise performance. "I told them this was my final magic trick," Evans responded. The kids evidently bought it; as Lil Nas X walked into the gym, the noise erupted, with one student even enthusiastically and repeatedly cheering, "Old Town Road! Old Town Road! Old Town Road!"

The class' reaction to the rapper's surprise visit is just the latest marker in Lil Nas X's rapid rise to fame. After "Old Town Road" became a viral sensation on the video sharing app Tik Tok several months ago, the song began to rise on Billboard's Country Music charts — but was removed in March, after it was decided that the tune was not country enough. It was a hotly contested decision, and highlighted the racism that exists inside the country music genre.

Yet rather than let Billboard's decision hinder his career, Lil Nas X used the exclusion of his song from the charts to catapult him to even greater fame. He produced a remix of the tune featuring Billy Ray Cyrus and, later, Diplo, which has charted at number one in the country charts for eight weeks in a row. "Old Town Road" even beat Drake in the number of digital streams for a single song.

Love for "Old Town Road", it seems, knows no age. From elementary school students to a college basketball team to a busking violinist and saxophone player, countless people have enjoyed the song and shared videos of their experiences. These tributes to Lil Nas X's track have permeated the web, earning the rapper a large and extremely devoted group of fans.

The Ohio students' adoration for "Old Town Road", though, is perhaps the sweetest of all. Felicia Evans posted on Twitter after Lil Nas X's performance to thank him for making it out to their school. "We love you," Evans wrote, with the below image.

You can bet that the school's faculty will have to work hard to make next year's end-of-year surprise possibly beat 2019's.

More like this
Ricky Martin said he has PTSD from Barbara Walters trying to out him on TV
By Kara Weisenstein
“A.I. is actually the fastest path to communism,” and other thoughts from Grimes that make no sense
By Rafi Schwartz
Harry Styles, king of gender neutral style, is working on a line of cosmetics
By Kara Weisenstein
Stay up to date