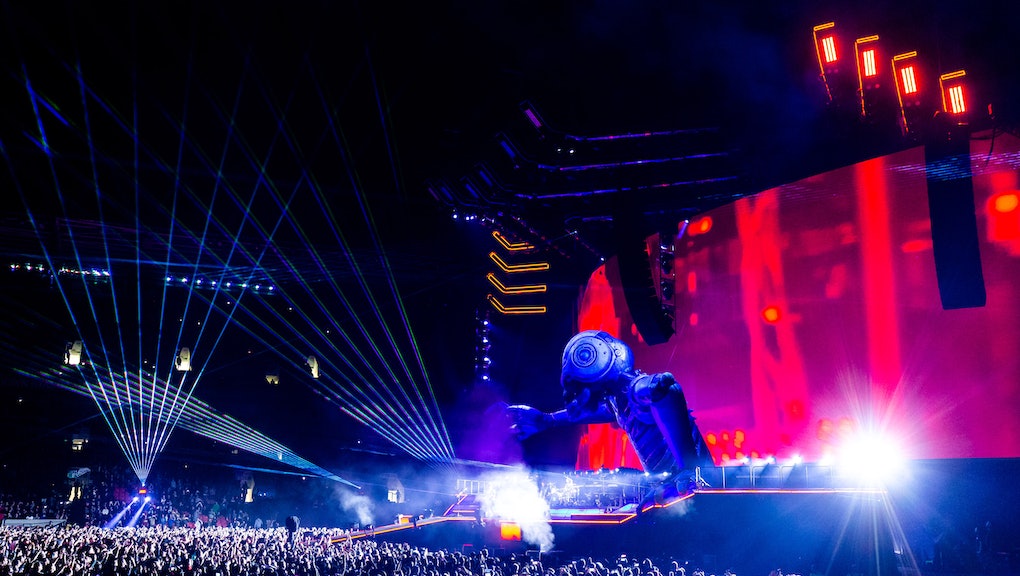 Concert tickets are expensive, even when they're not being scalped for exorbitant prices on resale sites. According to a recent report by Billboard, some bands are not only aware of the high prices of scalped concert tickets, but they've been using the touring company Live Nation to put their tickets directly onto resale websites such as Stubhub. Doing this allowed them to increase profits on sales, without being directly associated with the steep costs of scalping.

In June, Billboard obtained a recording of a phone call made in 2017 from an anonymous source close to Live Nation, which revealed how the scam worked. The February 2017 recording, made by former executive Vaughn Millette, was between Live Nation president of U.S. concerts Bob Roux and a wealth advisor named Tony DiCioccio, who was connected to the metal band Metallica. The call revealed that the group coordinated the stealthy sale of Metallica tickets directly to resale sites where they were sold for a higher price, before they went on sale to the public.

"Ticketmaster will not do it," Roux reportedly said on the phone call, about Ticketmaster's willingness to sell tickets directly to resellers. "Either a Live Nation employee or a venue box office basically take these and sell them into a singular account." This indicated that Live Nation had to move thousands of tickets to one account holder, who would then sell the ticket to a resale site.

The Metallica situation mentioned on the recorded phone call was just one of the examples of artists' tickets being sold on the resale market by Live Nation, according to the company itself. Live Nation admitted to Billboard that it coordinated the move of massive numbers of tickets to the secondary market, ensuring that the company, the artists, and any other facilitators would make a profit off of the strategy.

Live Nation also told Billboard that between 2016 and 2017, it facilitated the direct sale of tickets to resale sites like StubHub for "about a dozen artists" who "specifically asked" the company to do so. The company explained to Billboard that the reason artists sought to have tickets sold directly to resale sites was to have better control over the value of their shows, and Live Nation was able to help make that happen. Scalpers have been an issue plaguing both concert goers and musicians for decades, but with online ticket sales, it has become easier for third parties to buy massive numbers of tickets and sell them for a markup.

Live Nation's method of becoming the third party themselves ensured that markups could produce profits would go back to the artist. And, by being involved in the secondary market, artists and their teams were able to lose less profit from scalpers and moderate the pricing and demand of their concerts.

Live Nation also said that since 2017, the requests from artists to do this have dramatically declined, after Ticketmaster introduced new features that allowed artists to have better control over the way tickets to their concerts are sold. These features include platinum seating options, VIP packages, and dynamic pricing that have reduced the number of tickets lost to scalpers.

While what Live Nation and the artists they worked with did is technically not illegal, it does expose an industry tactic that harms consumers. By directly selling tickets to scalpers, dedicated fans are presented with an exorbitantly high fee for tickets. The profits would go back to Live Nation and the artists, instead of scalpers. For example, the deal between Dicioccio and Roux ensured that Metallica would net 40% of the profits from the resale tickets, while Live Nation would take another 40%, DiCioccio would get 12% and Millette would receive 8%.

While Live Nation claims that the practice is no longer common and other methods of ticket sales will be more beneficial for artists, Billboard reports that the secondary market for tickets could be worth as much as $10 billion. The resale market is still highly profitable, and even with new ways for artists to sell tickets to their fans, the financial incentive for scalping tickets exists.

More like this
The reason Simone Biles quit was more heartbreaking than we could've ever imagined
By Brandon Yu
R. Kelly was found guilty on all counts, and could serve decades in prison
By Brandon Yu
Lil Nas X’s ‘Montero’ is a vulnerable guidebook on self-acceptance
By Brandon Yu
Stay up to date