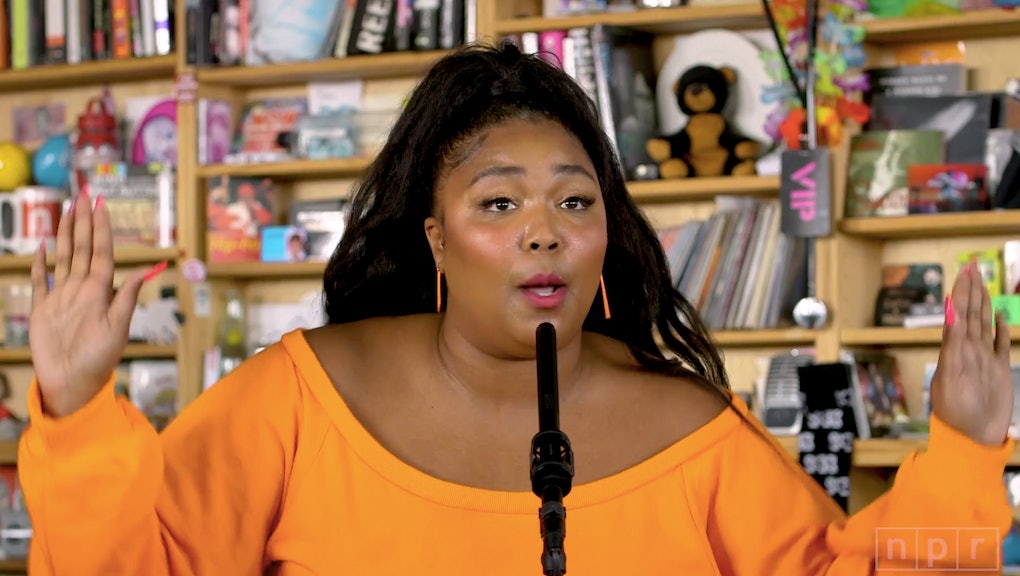 It's Monday — the beginning of a new week, a full to-do list filled with less than desirable tasks and obligations. But breaking up that haze and adding a bit of sunshine to your day is Lizzo's Tiny Desk concert. The singer partook in the wonderful tradition of sticking as many musicians as possible behind a single desk in NPR's offices, and it's impossible not to feel joy while watching her set.

For the concert, Lizzo went through her some of her most popular songs from her major label debut album Cuz I Love You, including the titular track, as well "Truth Hurts" and "Juice." She brought her much beloved flute Sasha (which has its own Instagram) to the Tiny Desk, and instead of her normal backing track, she was joined by musicians Devin Johnson on keyboard, Dana Hawkins on drums, Vernon Prout on bass, and Walter Williams on guitar.

"I've been wanting to do this a long time," Lizzo said into the mic. "So I think I'll do it today."

And so she did. She belted through her songs, radiating a strong glow in her neon orange dress and peach highlighter, flipping her ponytail over each shoulder and bobbing along to the beat of the music. She charmed the audience with jokes between each number. Throughout the performance, she exuded energy, joy, confidence.

Before she launched in "Juice," Lizzo told the audience, "this desk is so damn small, my thigh barely fit underneath it," before wiping a bit of sweat away from her brow. Watching her perform the hit song, it's not hard to see how she has become so widely beloved so quickly; Even without a stage, a background dancers, or lights, she's a star.

Lizzo's performance has already been a early week relief for the many people who've watched her 12-minute Tiny Desk, which was posted on Monday morning. It was referred to as "a time to be alive," "awesome from start to finish," a cure to both "Monday" and "depression," and all that some people have "ever wanted," on Twitter.

NPR's Tiny Desk series began in 2008 according to CNN, and since then they've hosted everyone from Chance the Rapper to Adele to T-Pain. NPR reports that the turnout for Lizzo's Tiny Desk was as big as it has ever been, which goes to show just how much of an impact the singer has had in the last year. Her rise to fame has included performances at awards shows, numerous magazine covers, and a constant pledge of radical self love. It is an attribute she hasn't just paid lip-service to, but has addressed in and outside of her work.

In a March interview with NPR's Terry Gross, Lizzo explained that she's worked hard to get where she is today, both as an artist and as someone who loves herself.

More like this
You can feel for Khloé Kardashian and also recognize she's part of the problem
By Kara Weisenstein
Queen Rihanna marched with the people against Asian hate this weekend
By Kara Weisenstein
DMX, the intense, gruff-voiced rap legend, has died at 50
By William E. Ketchum III
Stay up to date