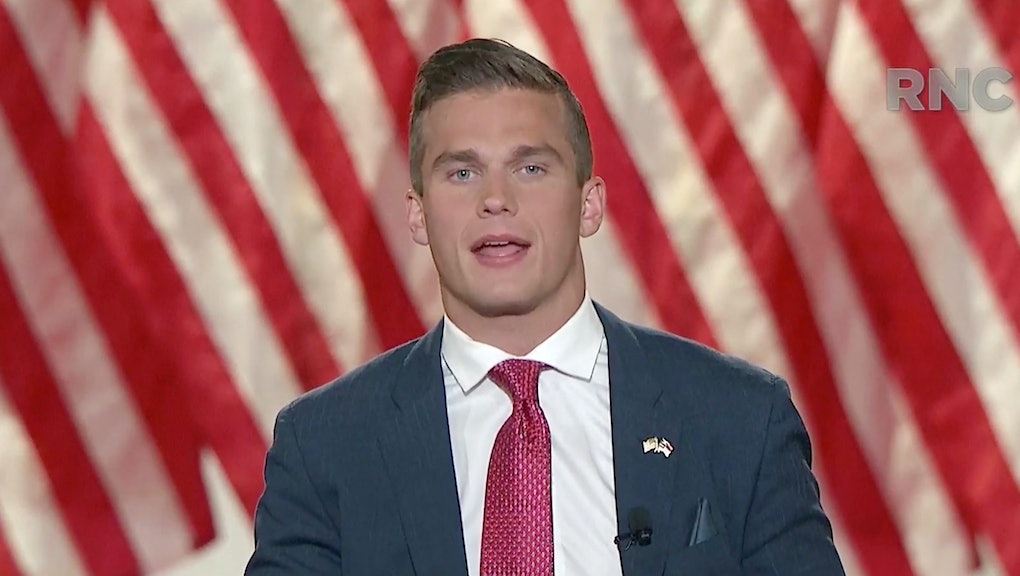 While the presidency dominated most conversations about the election this year, there were plenty of other races going on, too. Last night saw the rise of the youngest member of Congress in history — but it's not necessarily something worth celebrating. Given that Republican Madison Cawthorn once visited Adolf Hitler's vacation home and said it "did not disappoint" and has made some concerning references to the far-right, it's actually quite alarming.

Cawthorn defeated former Air Force colonel Moe Davis to win North Carolina's 11th District. The win wasn't a surprise because the 11th District is deeply conservative. However, Cawthorn definitely shocked many when he won the Republican primary back in June, defeating the candidate who'd been endorsed by White House Chief of Staff Mark Meadows, who left the 11th District to join the Trump administration.

Cawthorn turned 25 in August, just barely putting him over the line for the minimum age you have to be to serve in the House. He's also partially paralyzed due to a car accident he was in in 2014. His victory might seem like an exciting win — an upstart young politician with a unique personal story — but he's displayed some troubling opinions, particularly on his Instagram page.

In July 2017, Cawthorn uploaded a picture of himself outside of Hitler's vacation home in Germany. Referring to Hitler as "the Führer," Cawthorn wrote that seeing the vacation house "has been on my bucket list for awhile." He added: "Strange to hear so many laughs and share such a good time with my brother where only 79 years ago a supreme evil shared laughs and good times with his compatriots."

Cawthorn's opponent Davis seized on the photo at the time, tweeting in August that, "Hitler's vacation retreat is not on my bucket list." Put on the defense, Cawthorn said he denounces white nationalism and Nazism in an interview with WLOS, a local ABC affiliate in North Carolina.

"My Democratic opponent is pushing conspiracy theories to hide his radical agenda," CNN reported that Cawthorn said in a statement. "His suggestion that I, a man in a wheelchair, would celebrate a regime that would have had me exterminated is offensive to every thinking person in western North Carolina."

To be clear, you can be disabled and be a Nazi or support eugenicsThe fact that he uses a wheelchair doesn't shield Cawthorn from that criticism — especially because praising Hitler's vacation home isn't the only questionable thing about Cawthorn. In August, Jezebel reported that the name of Cawthorn's LLC, SPQR Holdings, may be a potential reference to white nationalism. The acronym SPQR is understood to refer to the Latin phrase "Senatus Populusque Romanus," meaning "the Senate and the Roman people." But recently, white nationalists have latched onto it.

If Cawthorn's election wasn't enough, Tuesday also saw Marjorie Taylor Greene winning in Georgia's 14th District. Greene is set to become Congress' first openly QAnon-believing member. It's another first that doesn't really merit celebration. It's clear that no matter which presidential candidate wins the election, Republicans have set up quite the interesting caucus for themselves this year.