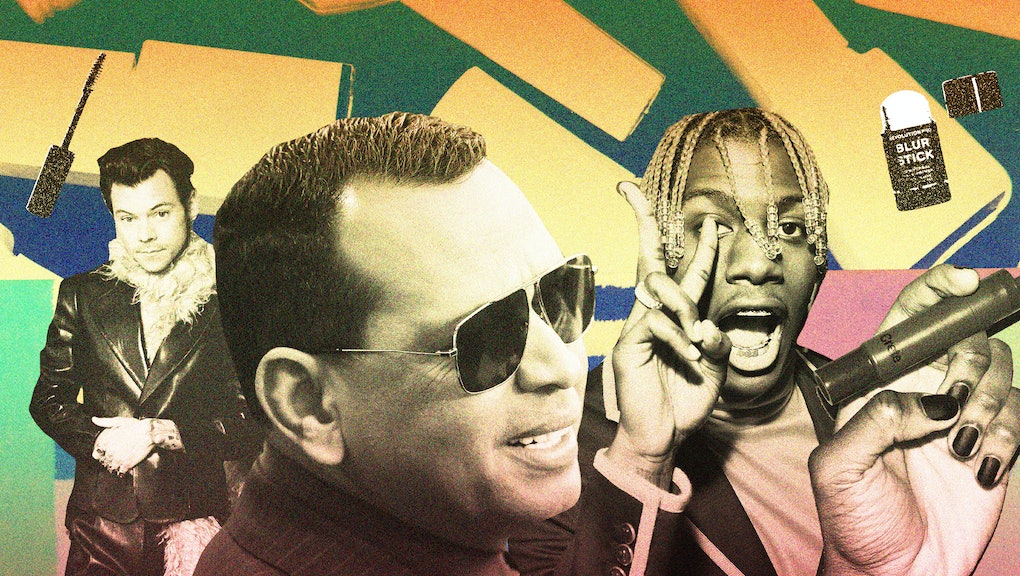 Makeup for men wants to defy the gender binary — but does it really do that?

More than ever, people are giving the gender binary the middle finger. As millennials and Gen Z increasingly embrace a fluid understanding of gender, brands are taking notes, including those in an industry that’s been traditionally, and heavily, marketed to women: beauty. Men’s makeup brands like MATTIAS, Formen, and War Paint for Men have emerged. Household names like Chanel and Tom Ford have men’s makeup lines, and A-Rod launched a men’s concealer with Hims & Hers, called The Blur Stick, last month.

These products share a few key features: They include concealer, bronzer, and other products designed to look barely noticeable. Their branding features neutral tones and what at least appear to be straight, cis male models. And they’re marketed — often explicitly — to men. But in their attempts to make men feel more comfortable defying the gender binary, are they also reinforcing it?

Regardless of the answers to these questions, this cadre of products reflects a growing acceptance of men wearing makeup. The shift could be credited to not only younger generations being less invested in the gender binary, but a broader understanding of the social costs of traditional masculinity, which discourages men from self-expression and views the body purely as a vehicle of strength, says Kyla Schuller, a professor in the department of women's, gender, and sexuality studies at Rutgers University. She cites the Me Too movement’s pushback on the notion of self-adornment as a sign of women’s worth as yet another catalyst.

“There’s a broad reclaiming of femininity as a form of creative expression and play, and that’s especially motivated by a broader acceptance of queer culture,” Schuller says. Indeed, Ted McKnight, a makeup influencer in Buffalo, New York, tells Mic that as we see more LGBTQ people in the media, big name celebrities like Harry Styles (who's reportedly working on his own beauty line) have been drawing inspiration from them.

Beauty influencers, most notably James Charles and Jeffree Star, have also helped dismantle the stigma surrounding men wearing makeup during the last few years. “I think now we’ve got a lot of influencers telling us actually, men can wear makeup for beauty and not just drag, not just for the stage, but for every day,” says Kareem Khubchandani, a professor of women's, gender, and sexuality studies at Tufts University, as well as a drag artist.

Other men wear makeup mainly to hide blemishes or masculinize their faces, explains Khubchandani, who goes by he/him, but welcomes any pronouns. “There are ways in which I think makeup for men is less about show, ostentation, color, vibrance, and flamboyance, but actually about neutralization," he says. Makeup brands made exclusively for men tend to fall into this category.

Especially because they’re marketed to look discreet — read: less traditionally feminine — Schuller believes this category of products upholds the gender binary while simultaneously subverting it. “It’s challenging the binary because the binary has traditionally said only men can be masculine, and only women can be feminine, and it’s part of the duty of femininity to make yourself look pleasing and attractive to men,” she says. “But it is also re-instilling the gender binary in their insistence in marketing it as men’s makeup. Why not just, makeup?”

Indeed, men’s makeup often relies on the same gendered marketing we see in everything from shaving cream to Kleenex, for what are ultimately the same products. “Marketers know that dividing things by gender is a powerful selling strategy,” she says. “I think that’s what I’m most suspicious about, is the way that the gender binary is not only a process of confining us into rigid roles of behavior, it’s also a tool of marketing to further entrap us in those roles.”

The neutral tones many of these men’s makeup brands use in their packaging reminds Khubchandani of walking into a typical clothing store, where the women’s section draws from a rich color palette, while the men’s is limited to the usual navy, beige, khaki, black and white. Makeup made exclusively for men is “reproducing the [notion that] masculinity is neutral, and femininity is excess,” Khubchandani says.

McKnight has complicated feelings about these products. On the one hand, seeing ads for A-Rod’s concealer line when he was growing up might’ve made it easier for him to start wearing makeup. “But the complete other side is that I think if we keep dragging the wedge between, this is for boys, and this is for girls, and nothing in between, then we’re just perpetuating the same kind of feelings and the same kind of stereotypes,” he says. “It's like … we know that [this makeup is] specifically for men because it looks like a Swiss Army Knife.”

Likewise, Aaron Dye, a makeup influencer in southern California, understands that these brands may be trying to open the door for men to begin experimenting with makeup — but through catering their products to a specific type of man, they necessarily exclude everyone else. “The audience that they’re most trying to target are those hypermasculine men,” Dye says, pointing out the use of “for men” in the names and marketing copy for many of these brands, as well as the use of baseball superstar A-Rod as the face of a concealer line. He and Khubchandani cite War Paint for Men as another example of this hypermasculine marketing — “just the name, the militaristic notions, the kind of aggression that is being suggested,” Khubchandani says. Dye notes that some of these brands only sell a handful of concealer shades, which raises questions about their racial inclusivity, as well.

He and others Mic interviewed traced the emergence of these products to a desire to claim a share of the lucrative global cosmetics market, which had an estimated size of about $324 billion in 2019, according to market research firm Research Dive. Beauty YouTuber Cohl Woolbright refers to makeup brands made for men as "cash grabs." "It seems like everyone wants in on the beauty money, and everyone will think of anything to get it," he says.

Khubchandani believes these brands are relying on the classic capitalist strategy of making us want more things and, in the case of men’s makeup and other products traditionally designed for women — meggings, murses, and the like — giving us permission to want them. To be fair, he acknowledges that makeup can be a powerful tool for women, femme people, seniors, and others whose bodies are often policed to be taken seriously. But “there are ways some of these brands are just trying to find a new customer,” he says, instead of doing the deep work of dismantling society’s intense focus on appearance, as well as the gender binary. In fact, they play into men’s femmephobia, he explains, essentially teaching them not to be flamboyant.

Insidious still is the use of only cis, straight-presenting men in their marketing, Woolbright says, which erases the gay and trans people who initially flouted norms about who can wear makeup — often at great cost — and laid the groundwork for these brands. “If you’re coming up with this supposedly male exclusive brand of makeup using only cis men, even though gay people paved the way per usual, you should be using them for your campaign,” he says. “Pay homage to the people who went through the struggles so you could run.”

What we need isn’t to create a new branding model, he says, but to move past our homophobia and femmephobia, and just buy what looks good on us.

What would a gender inclusive makeup brand look like, then? “It already exists,” Khubchandani says. “It’s women’s makeup." Makeup is makeup, regardless of who it’s marketed to. What we need isn’t to create a new branding model, he says, but to move past our homophobia and femmephobia, and just buy what looks good on us. The depressing reality is that “companies know most people don’t,” Schuller says, hence their aggressively gendered marketing.

That said, brands historically marketed to women, like CoverGirl and Maybelline, have featured male beauty influencers in their campaigns, which McKnight believes is “one of the biggest steps the cosmetic industry can take.” But Dye points out that these brands still tailor their products primarily to women, and Woolbright says some tokenize men in their campaigns.

The problem is, although we’ve become more accepting of men wearing makeup, we still have yet to normalize it. Woolbright wants to see more men, especially Black men, not only starring in campaigns, but shopping and working in Sephora and other beauty stores, which could help move the needle. "Honestly, I have never seen a Black male MUA [makeup artist] inside Sephora or anything like that," he says.

He and others applaud the recent crop of makeup brands that don’t cater to any particular gender, such as ATHR Beauty, Axiology, Phytosurgence, and Halsey's About-Face. Lil Yachty also dropped Crete, a unisex nailpolish brand, last month.

But Khubchandani questions whether we really need more makeup brands. Although gender fluid cosmetics “invite [him] in a different way than rigidly binarized products,” they’re still selling the same thing, but through another narrative. He sees them as examples of neoliberal capitalism, which comes up with more stories to sell us the same item, over and over.

“I would say there’s nothing wrong with being seduced by a story. We get pleasure from shopping therapy and such,” Khubchandani says. “But I think we just need to be aware that it’s not social justice work. It is capitalism.” Makeup brands are starting necessary conversations about gender — but liberating ourselves from the gender binary once and for all will take a lot more than marketing.

More like this
How to embrace body acceptance without being ableist
By Melissa Pandika
Can't bear to be in a relationship right now? Blame de-cuffing season
By Suzannah Weiss
This couple's gender reveal stunt started a deadly wildfire. They're now facing 20 years in jail
By Joseph Lamour
Stay up to date