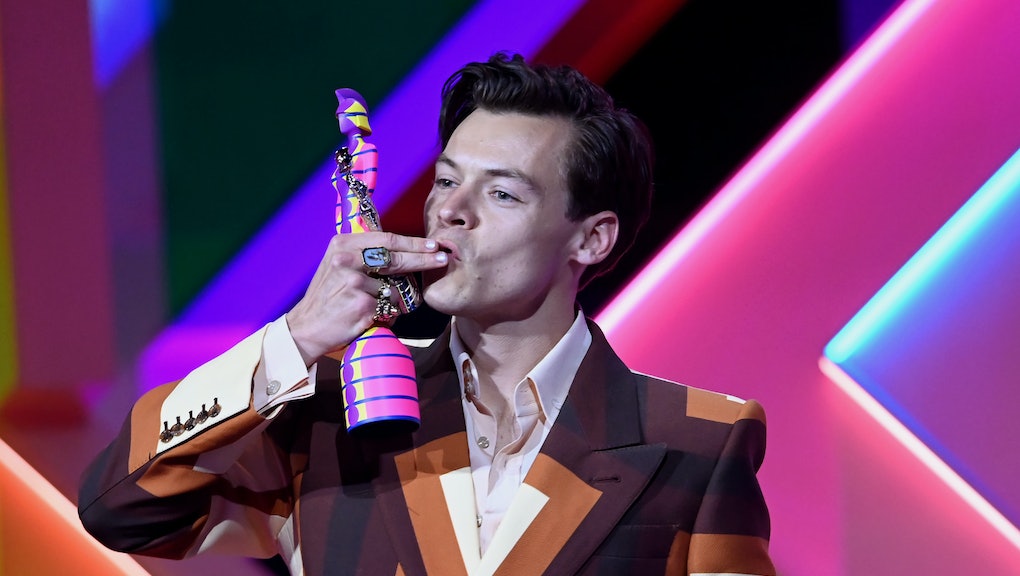 Harry Styles, king of gender neutral style, is working on a line of cosmetics

Gender-fluid beauty is finally going mainstream, and celebrities are jumping on the trend. Last year, Rihanna launched a line of Fenty Skin products marketed to "everyone" with a promo video starring A$AP Rocky and Lil Nas X. Last month, Lil Yachty debuted a sleek line of gender neutral nail polish. Another star with an affinity for man-icures is Harry Styles, who frequently rocks nail art and is known for his playful approach to traditionally feminine sartorial elements.

Now it sounds like Styles is preparing to enter the beauty business. According to Us Weekly, the singer filed trademark paperwork for his own line of cosmetics and fragrances under the brand name "STYLES, Harry Edward," which shortens to the acronym "S.H.E." His beauty brand is in its infancy and no products have been announced, but it seems Styles will be integrally involved in product development. He's listed as brand "Director" along with Emma Spring, the star's longtime assistant and mother of his godchild.

The lack of official details hasn't stopped fans from speculating that Styles might have a fragrance up his sleeves, perhaps similar to his rumored favorite scent, Tom Ford’s Tobacco Vanille. It's a pretty solid bet that Styles will launch his own line of nail polish, since he's no stranger to a whimsical manicure, from Fine Line-inspired fruit to cheery yellow smiley faces.

Styles is just as agnostic about gender norms when it comes to fashion. He posed for the cover of Vogue in a gown, looking sexy as hell, and blew the small minds of some conservatives. He donned a sheer blouse, a pearl earring, and a black-and-teal manicure for the 2019 Met Gala. More recently, he's taken to accessorizing with pearl necklaces.

"When you take away 'There’s clothes for men and there’s clothes for women,' once you remove any barriers, obviously you open up the arena in which you can play," the singer told Vogue. The same goes for beauty, obviously, and we can't wait to see what Styles comes up with.

More like this
I never want Tucker Carlson to stop talking about Nicki Minaj's cousin's friend's enormous balls
By Rafi Schwartz
Colin Kaepernick's new Netflix documentary highlights the man behind the icon
By Keith Nelson Jr.
Steve from 'Blue's Clues' gave us the closure we didn't know we needed
By Kara Weisenstein
Stay up to date