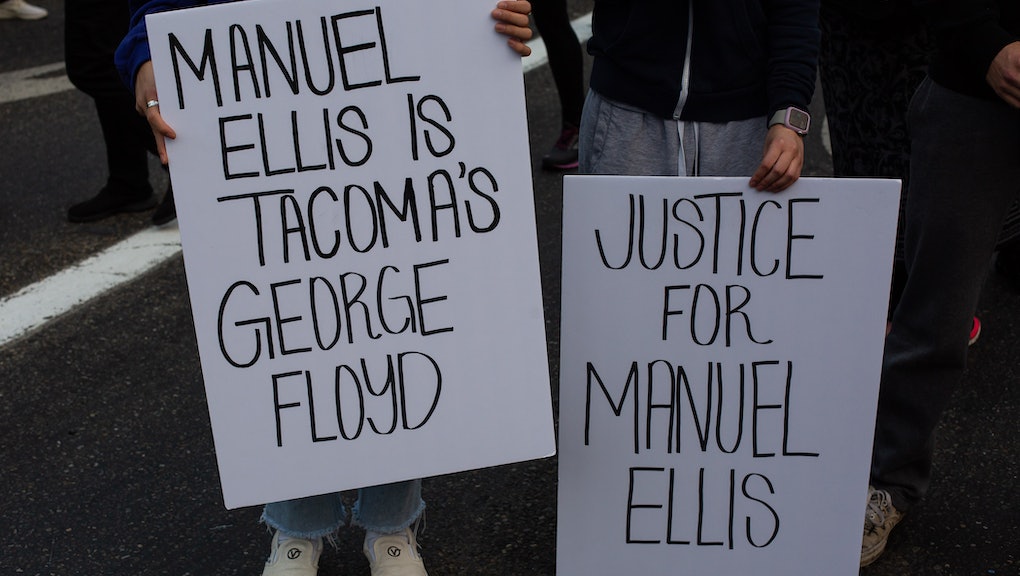 Manuel Ellis told police "I can't breathe." Now his death has been ruled a homicide

Nearly three months before Minneapolis police officer Derek Chauvin killed George Floyd by kneeling on his neck for nearly nine minutes, officers halfway across the country handcuffed, restrained, and listened to Manuel Ellis insist that he "can’t breathe" during an arrest in Tacoma, Washington.

This week, a medical examiner ruled his death a homicide: the direct result of hypoxia, or lack of oxygen, due to being restrained. According to The Seattle Times, Ellis also had methamphetamine in his system, as well as an enlarged heart. He was reportedly living in a sober-living house and was in the process of recovery.

Ellis was detained on March 3, after officers claimed to see him banging on the windows of a nearby vehicle. They said Ellis told them that he had warrants out for his arrest, and claimed that he then struck their squad car and attacked an officer.

Ellis was then handcuffed and restrained, at which point he began to tell officers he couldn't breathe. Pierce County Sheriff’s Department spokesperson Ed Troyer told The New York Times that he did not know what type of restraint officers used on Ellis, and that there is no body-cam footage of the incident.

"The main reason why he was restrained was so he wouldn’t hurt himself or them,” Troyer said. “As soon as he said he couldn’t breathe, they requested medical aid."

Still, the similarities between Ellis's death — the fact that an unarmed Black man was restrained by police officers, several of whom are reportedly white, only to insist he couldn't breathe before ultimately dying — and Floyd's make comparisons to the police killing in Minneapolis inevitable.

"Manny is George Floyd,” his sister Monet Carter-Mixon said during a recent vigil for Ellis. “I’m amplifying my brother's mouth from his grave. He’s still screaming, ‘Sis go get 'em, sis. Don’t let up sis.’ So I really need you to help me amplify his voice. He needs to be heard."

"We will learn the results of that investigation even as our country reels from the recent killings of George Floyd, Breonna Taylor, Ahmaud Arbery, and too many others,” Tacoma Mayor Victoria Woodards (D) said in a statement. “We look forward to the sheriff’s swift completion of the investigation, and we will take appropriate steps based on the findings."