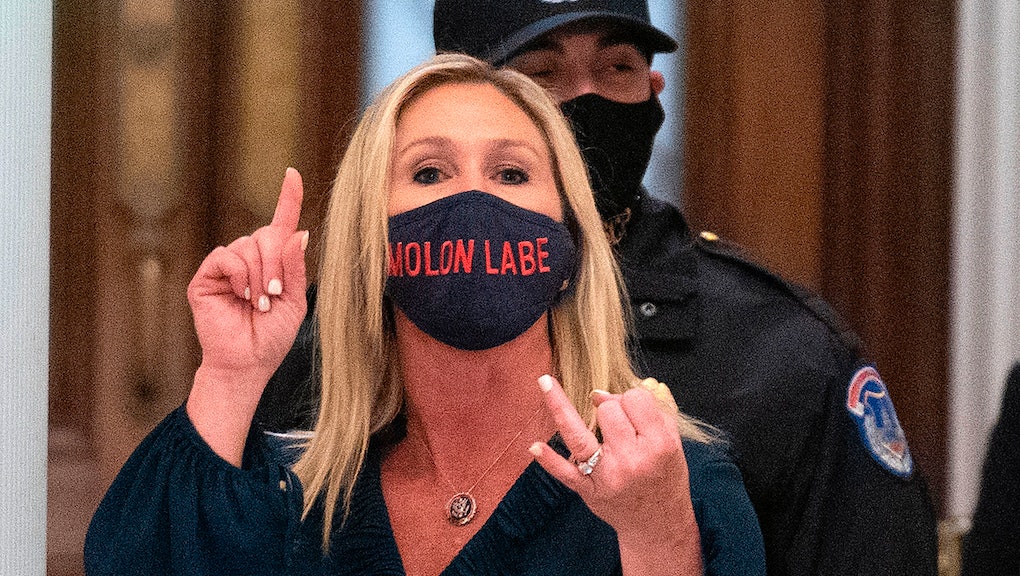 Marjorie Taylor Greene, the QAnon congresswoman, is even worse than we thought

You'd be hard pressed to find a more reality-averse, dangerously unhinged member of Congress these days than Georgia's newly elected representative Marjorie Taylor Greene. (I say this knowing full well there's another congressman who once put a knife to former House Speaker John Boehner's throat and likes to gesticulate with a nearly 2-foot-long walrus penis he keeps in his office for special occasions.) But however bad Greene seemed before she clinched her spot in Congress — and believing in an entirely fictitious, child-eating, demon-worshiping cult is pretty bad! — it now seems like we've only just begun to plumb her seriously deranged depths.

On Tuesday evening, CNN published an investigation into Greene's, shall we say, "prolific" Facebook activity in the years before she was elected. And wouldn't you just know it: It's completely bonkers. Among the various posts she commented on, liked, and tacitly endorsed include a call to murder her now-colleague, House Speaker Nancy Pelosi, with a "bullet to the head", and talk of hanging former President Barack Obama and former Secretary of State Hillary Clinton ("Stage is being set. Players are being put in place. We must be patient," Greene replied). In a particularly WTF moment, she seemed to ascribe to the "Frazzledrip" narrative within the nebulous QAnon mythos, which claims there's a video of Clinton skinning a child's face and then wearing it as a mask.

The CNN revelations came just one week after Media Matters reported Greene had also described the 2018 shooting at Marjory Stoneman Douglas High School in Parkland, Florida, as a "false flag" hoax concocted by high-ranking Democrats "in order to persuade the public to want strict gun control." Shortly thereafter, Parkland survivor and March For Our Lives founder David Hogg shared footage of Greene harassing him as a "paid" agent of gun control groups, sent to dismantle the Second Amendment.

For her part, Greene hasn't denied the alarming Facebook behavior, saying in a tweeted statement that "Over the years, I've had teams of people manage my pages. Many posts have been liked. Many posts have been shared. Some did not represent my views. Especially the ones that CNN is about to spread across the internet."

Assuming this is true (and, frankly, that's quite the assumption), how is "I let randos who believe this stuff represent me in public" that much better than "yeah, it was me"?

This latest wave of revelations might prompt some to wonder why these Facebook posts and incriminating footage wasn't found — or at least, wasn't highlighted — before Greene was elected to Congress. But I have to wonder: Would it have made a difference?

Consider that Greene beat her Republican primary opponent by an almost 15-point margin even after her QAnon conspiracy-mongering was public, and long after the FBI had labeled QAnon a potential domestic terrorist threat. That she went on to actually win her race by an almost 3-1 margin after her Democratic opponent "unofficially withdrew" but remained on the ballot just shows how futile any effort to tar her as an extremist would have been at that point. Voters may not have known the extent to which she was living in a violent fantasy world, but they certainly knew she wasn't exactly closed to the idea either.

Ultimately, it remains to be seen whether Marjorie Taylor Greene will finish her first term in Congress. Calls for her resignation have grown over the past few weeks, and on Tuesday evening, House Minority Leader Kevin McCarthy's office said he would have a "conversation" with his latest headache. But frankly, I'm not holding my breath for anything to happen. Remember, this is the same party that spent years pretending former Iowa Rep. Steve King wasn't a coarse white nationalist, until he eventually became too much of a problem for them to handle. Has Greene's rhetoric become enough of a liability for the GOP yet? Given the shape of the party, and the direction it's headed these days, I doubt it.

More like this
Marjorie Taylor Greene and her team are just openly accosting people in Congress now
By Rafi Schwartz
Buckle up: The investigation into the Jan. 6 insurrection is just getting started
By Rafi Schwartz
Liz Cheney is ousted from GOP leadership as the Trump cult takes over
By Rafi Schwartz
Stay up to date